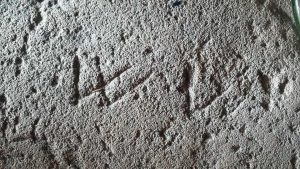 During the past few weeks additions have been made to the Edwinstowe Historical Society’s website and include reference to the medieval graffiti uncovered in the church.

In 2018 St Mary’s church was chosen to be included in the Derbyshire and Nottinghamshire Medieval Graffiti Survey.  A summary of the findings indicated that as Edwinstowe church had been restored in Victorian times, the rendered plaster having been stripped off, the interior walls were now bare stone which made the survival of graffiti very sparce and faint.  Some 25 pieces were identified and recorded on the interior and exterior of the church. 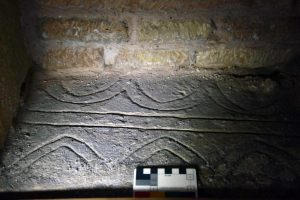 Currently the Society’s archivists are researching tourism in the village.  People have been visiting Sherwood Forest/the Dukeries/Edwinstowe for many years.  In the 19th century people began to appreciate the natural beauty and splendour of the forest, with writers, poets and artists gaining inspiration from the surroundings.  The opening of the train station in Worksop in 1849 and the station in Edwinstowe in 1896 enabled large numbers of visitors to come to the area and, after being met at the stations, travelled through the forest roads in horse-drawn brakes and charabancs.  They would then stop for refreshments in the village. 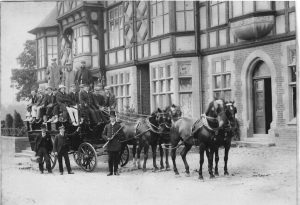 In the 20th century visitors continued to arrive, not necessarily by train but in coaches or their own transport.  In 1976 the Visitor Centre opened, but the decision was taken to demolish the buildings in 2018 and for a new Visitor Centre to be built on a site near to the cricket field.  In 1984 the first annual Robin Hood Festival took place attracting approximately 40,000 visitors during the week, and continues to be held annually (unless unforeseen circumstances prevail).