John Bellamy, gentleman, was a man of means when he died in November 1724. Principal tenant of the Earl of Oxford, he was steward to the Duke of Kingston when part of the Parsonage land was Enclosed 1722-3.

His parents were Frances and John (hop-grower) who was a St. Mary’s churchwarden in 1673-5; 1700-01; 1709-10 bringing wrongdoers before the Archdeaconry Court. As farmer of the Tithes (Taxes) of Edwinstowe, he faced the same court in May 1685: ‘for suffering the chancel to be out of repair…seats, pavement, walls’ and in 1688 ‘for not repairing his part of the churchyard fence’.* In April 1718, the Court recorded, ‘Churchwarden Mr. John Bellamy is dead’.  see Nottingham University Archives website

At the time of writing his Will in June 1719, John (junior) and his wife Hellen (or Ellin) had three surviving children:

Matthew Bellamy married to Joan Mason at Farndon in 1708

Ann Bellamy married to John Monk in 1702 at Bilsthorpe. Their daughter Ann Monk married James Walker at Bilsthorpe in 1724.

You can read the terms of the John Bellamy’s Bequests on Nottinghamshire Archives Inspire website [Will DD334/1, Codicil DD334/2] but these extracts give some idea how much land and property he owned:

He left his son John and his wife Mary twelve and a half acres of arable land ‘in the south field…called Farr New Close, being lately Inclosed’ also, ‘several parcels of land lying in the nether stinting of the East Field…being on the south side of the foot way that leads from Edwinstow to Ollerton…six acres and one rood’ and two messuage houses occupied by Jn Barefoot and Christopher Elam’, plus £50 to each of John’s children.

He left his son Mathew and his wife Joan ‘a message house tenanted by John Fotheringay neighbouring Miles Oldham on the south and the Lords Land on the north together with five parcels of land butting and bounding upon the Homestead well, The Townend Close containing two and a half acres of arable land in the possession of Thomas Oldham…all my land lying at the north side of the footway from Edwinstow to Ollerton, also Blackhill Dale Close four and a half acres

He left his daughter Ann and her husband John Monk land at Mansfield – three closes occupied by Charles Naylor butting upon Ramsdale East, Sandy Lane south and west including the Barn.  On his granddaughter Ann Monk’s marriage to James Walker John gave her a £1,000 Covenant including ‘a dwelling house and all yards orchards gardens and buildings known as Kitchin’s House butting upon James Woodhouse…and one acre and one rood of land in the West Field plus Barrett [Barrot] Meadow –about two acres.’

Providing Bellamy’s widow Hellen did not remarry, she would inherit the Crown Inn with several tenements on Long Row, Nottingham. The Codicil also mentions an interest in the Talbot Inn in Mansfield.

For the ‘Incouragement of Piety and Learning in Edwinstowe’ he bequeathed the School House with Snowden Meadow (bounding upon Mr. Goslings west pale close north, Boy Lane south –3 acres) and Woods Meadow (Lords land east, Edward Bullivants west, Thos. Oldhams north, Carrbrecks south 2 acres)’’. Under the guidance of the Rector, his son John Bellamy and son-in-law John Monk these were to be let to the best advantage, the rents paid quarterly to the School Master to teach eight children of poor honest and religious parents, such as shall be born in the Town of Edwinstow…instructed in Reading and English. The teacher appointed must not be married before he was admitted! By 1743, Edwinstowe Free School was “well looked after by a sufficient person”.

For the Relief of Poor Widows, he gave the yearly rents from two houses adjoining the schoolhouse (occupied by William Smith and Anthony Tisington) to be distributed by the Trustees to four of the Poorest Honest Widows who were ‘thought to be the most Needfull’ at the Feast of St Michael and Lady-day. Around 1800, the two dilapidated houses, having been occupied by poor persons rent-free, were pulled down. Parish officers chose widows to occupy the four small houses which were built to replace them. When the new schoolyard was built they lost the use of their communal piece of land. 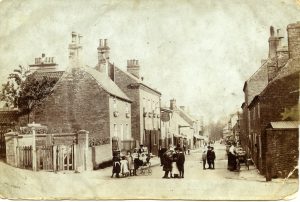 View of the High Street from Church Street. This view shows the village pump, the old Royal Oak Hotel and the Alms-houses. The stone that was built into the Alms-houses can now be seen in the War Memorial wall. Mr. Alsop can be seen centre right with white sunhat. Approx. 1903 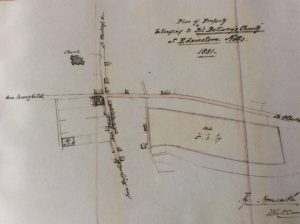 In 1791, Reverend Charles Gordon chose Edward Bullivant to become a trustee. In 1821 the two meadows were let by auction at a Vestry meeting at a rent of £12.10, but the tenant gave notice at Lady Day 1824 because the rent was too high. Earl Manvers took the meadows over at a rent of £10 which he exchanged for Parkinson Close and Manor-house Garden (for the schoolmaster’s garden). He paid for a new school and house to be built in 1824, and he and the Vicar personally made up any shortfall in the Schoolmaster’s pay. Charity Commissioners (appointed by the Archbishop of York) Report 1815-183

On 10th February 1899 the Charity Commissioners arranged the sale of the four almshouses and Bellamy charity land. The proceeds were to be invested: the interest was divided into six parts. One part would be for the benefit of 4 poor widows, the other five parts were for educational purposes and the payment of rent for a parish room or reading room. The charity was controlled by seven trustees. John Bellamy’s Almshouses and the old schoolmaster’s house were pulled down in 1921 when the War Memorial was built and the road was widened at the junction of High Street and Mansfield Road. 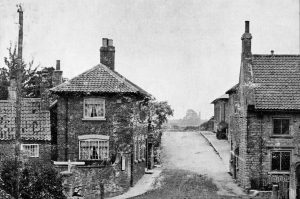 The dedication stone from the original Almshouses is built into the wall round the War Memorial, although the inscription has totally worn away (last section of wall, top of the High Street). It read ‘John and Ellin Bellamy 1678’. By an amazing coincidence a reprint of the Edwinstowe Parish Registers 1634-1758 also contains drawings of this stone and a square one ‘B I E 1713’ with a plan showing their original position.

Details of all charities are available from the Charity Commission.