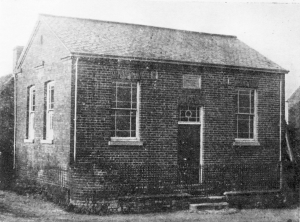 The Primitive Methodists who were known as the ‘Ranters’ were established in Edwinstowe around 1816-7 and their chapel was opened in 1848 (in the same year as the Wesleyan Chapel) on the corner of Friend Lane near the railway station opposite the Dukeries Hotel.  It was ‘a small, but clean and comfortable structure, with rising pews. Behind the tiny communion rail stood a high tub-shaped pulpit, fitted with two imposing paraffin lamps.’ According to the Religious Census of Edwinstowe and Thoresby taken in 1851 the congregation was recorded as 55 (afternoon) and 110 (evening). Space free 50, other 110, standing 30. Their approach to new building differed from the Wesleyan Methodists who tended to wait until they had the majority of funds before starting a new project. The Primitive Methodists in the circuit sometimes held outdoor camps, weeknight meetings and even allowed women preachers 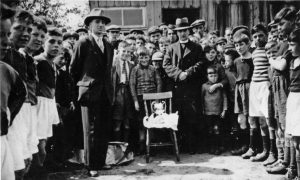 On Monday the 7th, tea was given by Mesdames Charlton, Anderson, Fells, Freeman and Willmot. At the public meeting which followed, the chair was occupied by our Friend Mr. James Lucas. After a short speech by Brother Masling, Brother Anderson gave us a brief historic account of the chapel funds, and the various plans which had been adopted in order to lessen the debt, and bring it into the neat, clean and respectable condition it now presents. The writer and Mr. Watson subsequently addressed the meeting. The net proceeds of the anniversary amounted to £5.2s.10d.” 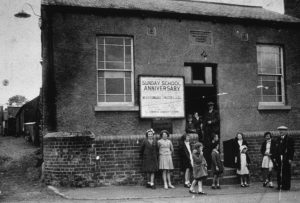 In 1923, the Primitive Methodist Leader reported that “Edwinstowe School Anniversary took place on July 1st. The conductor in the afternoon was Mrs. F.J. Pennock and Reverend F. J. Pennock in the evening. The children sang and recited special pieces. Large congregations were present, and the effort was a pleasing success. Finances good.”

The best-known visiting preacher was Reverend James Flanagan (1851-1918). His mother, Elizabeth Robinson, was born in Edwinstowe in 1821. Read more about Rev. Flanagan in the link – People.

In 1948, both Methodist churches celebrated their centenary. Due to diminishing attendance, in 1951, the Primitive Methodists merged with the Wesleyan Methodists. After the final service in the Friend Lane chapel, the congregation paraded through the village to the Methodist Church where another service was held followed by a tea for the combined congregations. Official posts were divided between the two churches. Mr. S. L. Winfield who tenanted the farm next to the former Primitive Methodist Chapel used it to store his farm equipment.  It gradually fell into disrepair and was demolished in 1986.

SYMBOL of the PRIMITIVE METHODIST CHURCH