The first obstacle to overcome was the provision of instruments and music. The instruments were hired from Welbeck Colliery Band, and the music obtained from the library of Grimsby Borough Prize Band. The tuition was initially provided at an evening class at King Edwin school in Edwinstowe. 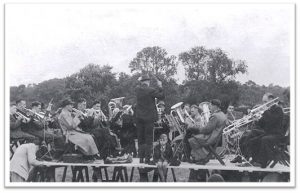 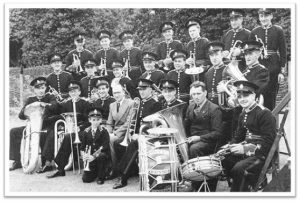 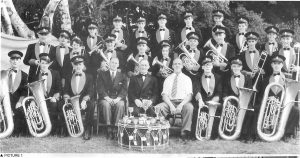 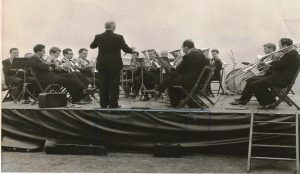 Second section standard was attained in the early 1960’s and in 1967 we saw the appointment of the  late Mr W Lippeatt as musical director, and the band gained a new dimension on its way to the Championship section.

In 1968 the Band won the International Eisteddfod at Middlesbrough (second section). The following year in 1969, was the Band’s most successful year gaining nine first prizes in the second section including Midland Area Champions, Belle Vue Grand Shield Winners, and second section National Champions, thus gaining promotion to the Championship Section. The band’s highlights in the Championship section are : 1970, 5th place in the British Open Championship at Bellevue, 1975, Midland Area Champions and sixth in the National Finals the same year.  Numerous prizes have also been obtained at the C.I.S.W.O and Pontin’s Championships. In 1973 the Band received sponsorship from Dosco Overseas Engineering LTD, thus changing their name to Thoresby Colliery Welfare (Dosco) Band. 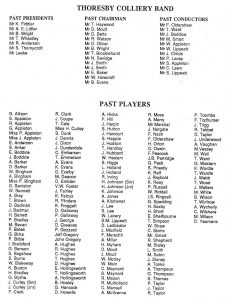 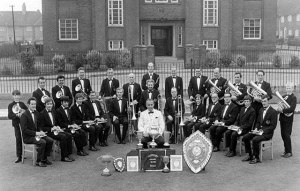 The Band 1960’s pictured on the bowling green with the Miners’ Institute in the background. 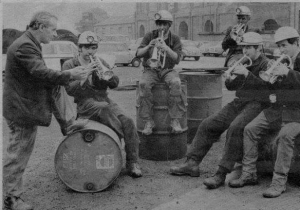 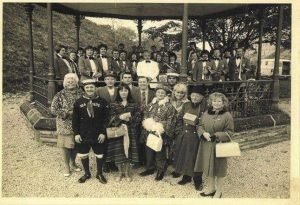 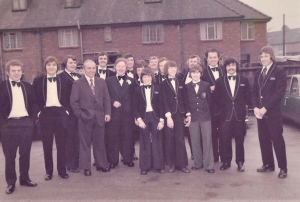 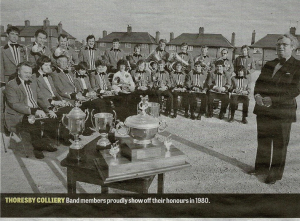 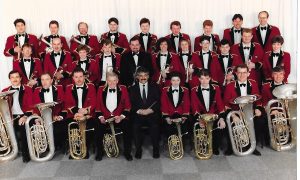 1993. Joy Manufacturing Company took over the sponsorship of the Band from Dosco Engineering 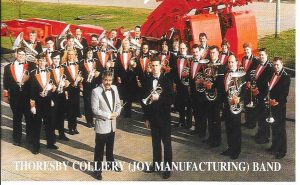 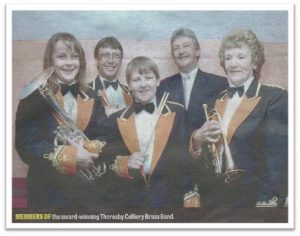 The last time Thoresby Band won a National title was in 1969 in the Second Section. Its current conductor Stan Lipeatt played in the band, and the Band was conducted by his father.

2000, a year to remember for the Thoresby RJB Band The band practice for the Pageant 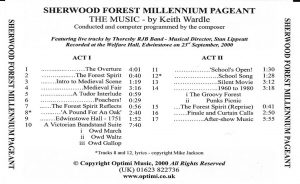 July 2000 saw the launch of the Youth Band The band was launched under the baton of Christine Gent. The members are aged between 8 and 15 from Edwinstowe and surrounding villages. Christine devotes much time to arranging suitable material for them encouraging them to not only play as a team but also to express themselves in solo and quartet pieces.

Christine is supported by Pauline and Walter Daglish themselves accomplished musicians.

The last Summer concert for the band was back at home in Edwinstowe when, at the end of September, both senior and youth bands performed in the annual autumn concert. Once again, we had a capacity audience.  This season’s concert featured music prepared by the band for their two visits to London.

In August, the band played in St. James’ Park and Regent’s Park. London, and the band was asked to play some appropriate music for “America’s Day”.  Consequently, Sousa was well represented with the marches Liberty Bell, King Cotton, The Thunderer and Stars and Stripes.  There was also music by Glen Miller and Dvorak’s New World Symphony.

Less than a month later, the band was in London again, this time for a more moving occasion. We were invited by the Government Department of Culture, Media and Sport to perform the music for the Service of Remembrance and the opening of the Memorial Garden in Grosvenor Square, in memory of the British victims of September 11th, 2001, in the United States.  The band played for half an hour prior to the service for the gathering families and then two pieces during the service.  Readings were given by the Hon, William Farish, USA Ambassador. Dame Judi Dench, and the Rt. Hon Tessa Jowell (Secretary of State for Culture, Media and Sport) before the Princess Royal addressed the congregation.  At the end of the address the Princess Royal invited a representative from each family to follow her into the memorial garden to lay down a white rose in memory of their loved ones.  The music requested by the organisers had a very traditional bias, as England, Scotland, Wales, Ireland and America were all featured in “Amazing Grace”, “Ye Banks and Braes”, “Myfanwy”, “Londonderry Air” and “Old Creole Days”, from the Mississippi Suite, specially arranged for the occasion by Simon Kerwin.

At the beginning of the Summer the band appeared at Bolsover Castle for a Last Night of the Proms organised by the Rotary Club of Chesterfield & Scarsdale.  The evening attracted a large crowd into the castle gardens with their deck chairs and picnic hampers and, as the concluding items were performed, out came the Union Jacks to be waved aloft in the evening sky. October 18 saw the start of a momentous weekend for the Thoresby Colliery Welfare Band who were celebrating their 60th anniversary. The Thoresby Welfare Social Club was full to capacity with current members, players from the past, including a few of the founder members, the eldest being Mr John (Taffy) George, aged a sprightly 93. The Thoresby Youth Band, with their conductor, Christine Gent, entertained this knowledgeable audience with their performance which certainly showed off a fabulous team talent to the veterans of yesteryear.

The entertainment continued with Stan Lippeatt in his ‘comical mode’, inviting former players to the stage to tell their stories of the old days and pastimes with good company, which brought laughter and a few tears to the audience. He commented on the success of the senior band, which has been Championship Section grade for many years. Various memorabilia were on show throughout the evening and a Kaleidoscope of photos was projected on screen throughout the evening.

During the Youth Band concert, Thelma Wardle presented a cheque to Christine Gent from the ‘Keith Wardle Memorial Fund’ which will hopefully be used to buy much needed equipment. The evening closed with dancing, handshakes, smiles and many shared memories.

On Sunday October 19 band manager Graham Thomas welcomed the supporters of the band, local residents and colliery management to the concert given by the Thoresby Colliery Band which was directed by Stan Lippeatt. Extending their appreciation to their supporters and the village people, there was no admission fee.

As a tribute, the programme also included items written by the late Keith Wardle who passed away in June. Keith was a former member and musical director with Thoresby. He enjoyed constant, close links with Stan and the band who once again delighted the audience with a selection of his music which was commissioned for Edwinstowe’s Pageant celebrations, namely his infamous ’Owd March’. Chairman, Mark Wardle, gave thanks to all the players and their families for their help. Butlin’s “Mineworkers’ Brass Band Contest” administrator, Mr Brian Eggleshaw, received the “Keith Wardle Memorial Challenge Trophy” from Thelma Wardle which will be the first prize in the new Youth section at the contest which is held in January in Skegness. Almost 100 bands will be taking part in the event in 6 sections with the Thoresby Band entering the Championship Section and The Youth band in the Fourth Section. Both bands have enjoyed much success in previous years, and we wish them well in January. Thoresby Band had a busy festive season leading into 2009, with two concerts at the Royal Centre, a BBC broadcast for Radio Nottingham, and two concerts at their “home-ground”, the Thoresby Social Club, all under the direction of their new conductor, Mark Wardle. Playing to over 6,000 people over these 5 engagements is a real thrill for the band and a highlight in their very busy calendar.

Recently, Thoresby featured at Worksop’s brightest new venue, “The Crossing” at Worksop and a brand-new season of “Brass Content at the Crossing” was opened in terrific style by the band. A capacity audience of 350 were entertained with a wide and diverse programme, highlighting the band’s ability to entertain at all levels. In recognition of long-standing commitment to the local community in the Edwinstowe area – in particular his work with the Thoresby Colliery Band.