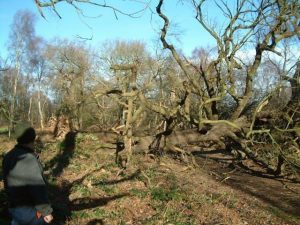 We knew they were coming the forecast had been full of the gales the day before- but when the morning of 18th January came and things were relatively calm, we thought we’d got away with it.  How wrong can you be?

By 12.30pm the storm was winding itself up; by 1pm the first trees were reported down or damaged and by 2 pm, the conditions were so severe that it became necessary to close the park.

Many local people heeded the signs and the conditions, but some visitors still put themselves at risk by walking through the woods as trees and branches came down around them.

Conditions became quite frightening and it soon became apparent as we inspected the park, that every path was blocked by fallen trees.  The winds were so strong that whole trees were ripped out of the ground, and swathes cut through the park.

Tree loss has not been on this scale in the park since 1976.  Many mature birch trees were uprooted, as were several mature oak trees, and many limbs were lost, causing instability to the remaining trees.

Happily, the veteran oaks largely weathered the storm, as they have for centuries before, with only two complete tree failures and one lost limb. The northwest corner of the park was particularly badly hit, with four huge oaks being lost across a section of the red way-marked trail.  This path will now be permanently re-routed to enable a new habitat to develop in association with these fallen trees.  It is possible that some ‘phoenix’ regeneration may occur (where the trees continue to grow from their fallen state). 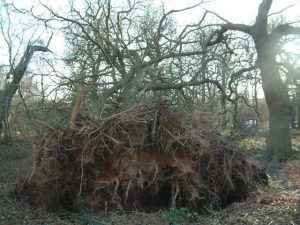 Due to the severity of the storm, the park remained closed on the following day to enable a thorough inspection to be undertaken.

The day was much calmer and conditions for the clear-up were ideal.  Unfortunately; they were also perfect for a walk in the woods and, despite signs and closed car parks, people still came, impeding the clear-up process however unintentionally.

Seventy five trees were cleared from the paths by staff, volunteers and contractors, with twice as many being left to enhance the deadwood habitat where they fell in the woodlands.

The Visitor Centre and Major Oak path were re-opened for the weekend, with the remaining paths opened the following week.

Despite this storm leading to the worst tree loss in the National Nature Reserve since 1976, we got off very lightly compared with the losses sustained at both Sherwood Pines and Clumber Park, as seen on the news.