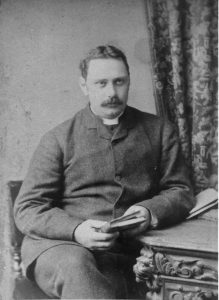 Henry and Ellen Maria Hayman came to Edwinstowe Vicarage in 1884 with their three children, Telford, Percival and Phyllis and Ellen’s father Dr Ebenezer Cobham Brewer, a widower, who was busy revising his famous Dictionary of Phrase and Fable. (When he died in 1897, Ellen completed the work.)

Under the patronage of Earl Manvers, the living comprised Edwinstowe with Carburton and Perlethorpe, so Henry would have been glad of his father-in-law’s assistance officiating at many marriages and burials. Surprisingly, his entries in St Mary’s burial register at this period have frequent errors, crossings-out and blots. He seems to have been impatient with paperwork!

A keen sportsman who had played cricket for Kent, he transferred his passion to Notts County, playing as an amateur and serving on the Committee. He remembered W. G. Grace and recalled meeting an Aboriginal team whose visit caused quite a sensation. He also preached at the fourth annual Football service in St Mary’s Nottingham. He said, “Let them play honestly with no dirty tricks, no fouling just as a goal is about to be got, no un-English play, no miserable squabblings, no attempts at bamboozling the referee, let them go to the ground with a determination to win…….”

In 1912, Henry was awarded the Territorial Decoration in recognition of 25 years service as Hon. Chaplain to the Nottingham Volunteers (aka Robin Hoods) and was disappointed later that his age precluded him from accompanying them to the battlefields of France. 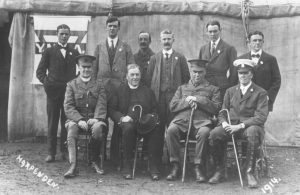 The YMCA sent at Harpenden in 1914. This group of men appear to be predominantly clergy. Seated second from the right is Rev. H.T. Hayman, who was the Chaplain to the Robin Hoods.

Henry Hayman was chairman of many committees including the one which set up Edwinstowe Co-operative Society in 1895. In April 1897, he was Chair of the newly constituted Parish Council. Later as sole surviving Trustee of the local John Bellamy Charity, he proposed to the Parish Council an excellent scheme to bring the charity up to date.

He oversaw the fund-raising by subscription and subsequent hanging of a ring of 6 bells in 1889. In the 1890’s he began an extensive restoration of the St Mary’s church building which cost £1,750. It was decided that plaster applied to the walls in the 1840’s, together with a plaster ceiling, should be removed and replaced. A piscina was discovered in the south aisle and the font was moved. In 1897, the Bishop of Southwell preached to a large congregation when the church was re-opened. 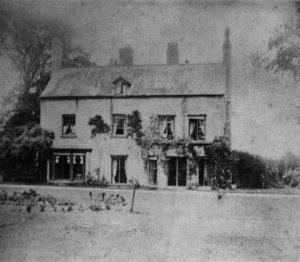 An ardent and accomplished musician, Henry rendered valuable assistance to Edwinstowe Choral Society. He was in demand at social evenings to sing his, “good rollicking songs” in his strong bass-baritone. According to Henry’s grandson, Joe Woodhead performed a song with many verses which began:

“Muster Hayman the Vicar he sings a good song;

He preaches a good sermon, it’s not very long. 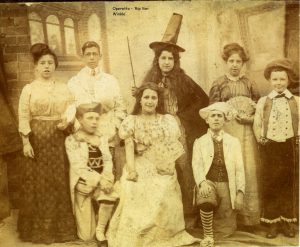 Artists sketching in Sherwood Forest would sometimes be invited to the join in musical evenings at the Vicarage. In April 1900, the whole Hayman family took part in an ambitious four-act Operetta Rip Van Winkle in the schoolroom raising funds for the Girls Friendly Society which concluded with a patriotic tableau of Great Britain and her colonies (this was during the Boer War).

“A fine, upstanding man, he had a wonderful voice, and to hear him read the lessons in Church, was a delight to every hearer. He was also a good preacher, and usually delivered his sermons with closed eyes. He was a big man and he had a big heart full of consideration and love for his fellow creatures.” After 23 years at Edwinstowe, Henry accepted the living at Thornhill near Dewsbury.  Someone said later, “What a magnificent old Friar Tuck the Rev. H.T. Hayman would make. With his portly figure and deep rich voice he is a typical Forester of the old days. And what is more he loves old Sherwood, and we cannot but think his removal to Yorkshire must have caused him many a regret.”

When Henry and Ellen celebrated their Silver Wedding in 1904, they had asked all those who had been married 25 years to a dinner at the Royal Oak Hotel and invited the villagers to supper at the Vicarage. In 1929, they celebrated their Golden Wedding. In 1937 The Bishop of Wakefield made a special visit to Thornhill to mark the diamond jubilee of Reverend Henry Hayman’s ordination.

Ellen died at Thornhill Rectory two years later. “Many people will lament the loss of a lady of great personal charm, of the kindliest disposition, well known for her many bountiful acts, one whose aim in life was to help those around her.” 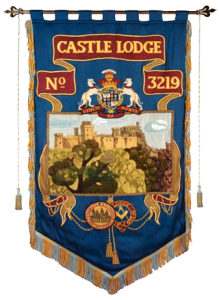 Henry was a Freemason, serving for 30 years as Deputy to the Duke of Portland and succeeding him in 1932, as Provincial Grand Master of Nottingham. Aged 80, he preached a sermon to over 700 brethren at a Masonic Service in Southwell Minster to help raise £3,000 for repairs to the organ. Someone commented, “It is a great gift and shows how full of vitality his brain is for him to stand in the pulpit and preach for half an hour without a single sentence written.” 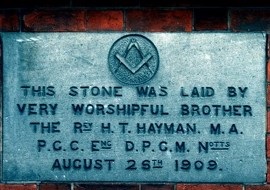 Henry retired to live with his younger son, Percival, at Cheltenham where he died in February 1941 aged 87.

In the late 1980’s his grandson, Canon Perceval Hayman, corresponded with Mrs. Woodhead, sharing family photographs, memories of Plough Monday and the half-remembered words of Joe Woodhead’s song. He was guest preacher during St. Mary’s Church Victorian weekend in 1990.