At the rear of the church, there is a board which lists the previous vicars (incumbents) who have served the church over the centuries. It is a reminder of their dedication and devotion to God, the church, the members of St. Mary’s and the community as a whole.

A church in Edenstou was reputed to have been built over the site of the temporary burial of St. Edwin. AD 633. Probably of Sherwood Oak on a stone foundation. We have no record of who the priest was. The Domesday Book, in 1086, only records that Edenstou had a church and a priest.

Later, in 1146, Edenstou and its chapelries, was given by William 11 to the Dean and Chapter of Lincoln.

In the reign of Henry 11, 1168-69 Edenstou contributed three marks to the subsidy levied for the marriage of the king’s daughter. The priest at that time would have collected the money. Did it come from the villagers and/or the Lords?

In the late C12th, the first recorded Rector of Edenstou was William Parson. This was when the stone church was built in 1175. What a site he must have seen when the stones were being laid. What an enduring legacy he has left us.

The vicarage was ordained on the 15th January 1260/1. The vicar at that time was Richard de Melton. His family were from Yorkshire and his father was a Norman Knight. A relative, William de Melton, was Archbishop of York 1315-1340. In 1306, 28th July, he was replaced by William Thistleton when Richard moved to a new church. Later in 1318, he became rector of The Holy Cross at Gilling near Hull.

John de Ryston was then appointed vicar on the 13th October 1317. It is believed he came from Ristuna (Ryston) Norfolk, a deserted medieval village abandoned by the 18th century. We know very little about him except that in 1334, he broke the strict forest laws and was imprisoned for deer poaching; considered a major crime. There was a Forest Court in Edwinstowe but he was held at Nottingham Prison. Was he brave or foolhardy? It is hard to imagine he stole for his own needs.

There are many, many more names on the board that we could learn more about, each with their own intriguing stories to discover, their lives and times. The one thing that they all have in common was their position in the church, and what we would hope, their love of God, the care of God’s people and the church building itself. In researching these individuals, I could not help but wonder what were their visions and dreams, in a moment in time, for Edwinstowe.

Robert de Burton’s name, you could say, is just another name among many other vicars who came to Edwinstowe, with his name listed on the board at the back of the church. Very little is known about him but his family was very well known. Accounts of his family were recorded, from many different sources, in fact you could almost write a bestselling drama about their deeds, actions and wrongdoings.

Burton (Bertune) was an ancient Norman family who came to England with William the Conqueror 1028 –1087) the First Norman king. The Conquerous’ Survey shows they owned a manor, a church and a priest, one border, one servant, one maid, 2 carts, 5 acres of land, 16 acres of meadow and an acre of woodland valued at one mark of silver.

Descendants of Robert de Burton gave the village of Great Hodenhall, in Warwickshire, to the nuns of Eaton. (Nuneaton)

Another relative, again called Robert de Burton, was appointed in 1379, as ‘Master of the hospital of Playden’. However, in 1380 he cut down timber to the value of £20 at Brookland, he allowed hospital lands to go to waste so crops were lost, he took title deeds, bills valued at 40s and other documents proving another person’s title to land, he gave nothing to the poor so they had to beg daily on the streets and even worse he took cooking vessels instead of rent in which they prepared their dinners.

On another occasion Robert and three others, on the Friday after the Feast of the Annunciation, were accused of robbery and breach of the peace. They broke down the door to a manor house of William de Mere’s, tied him up, forced open a chest with an axe and stole £10. Robert took 6 marks as his share, 20 gold rings, value 60s and 4 girdles of silk with silver worth 100s. The group took flight and after being chased from village to village were caught. They appeared in the county court but denied the felony. William was the prosecutor and could have passed sentence himself, but instead a jury was called. We have no information about the outcome of the case. 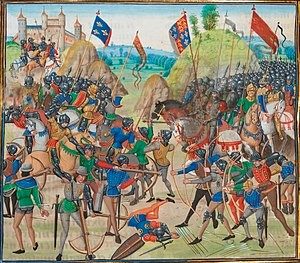 Four weeks before ‘our’ Robert came to Edwinstowe, on the 12th August 1346, Robert’s father, also called Robert de Burton (a Norman Knight) sailed from Portsmouth on the 12th July with King Edward 111 and 1,200 men including 7,000 archers. The King’s mission was to invade Normandy. The Battles of Crécy, on the 26th August, followed with the French being defeated by the English longbow men. The first great English land victory of the Hundred Years War.

Life for ‘our’ Robert would have been so different. Settling into a new home and church, taking his first services, meeting the people of Edwinstowe and possibly thinking about his father in France with the King. Robert died in August 1349, just 3 years after coming here. We do not know why. However, during 1348-49 half the population of Nottinghamshire died of the plague (Black Death)! The villagers would have attended his funeral and he was probably buried in our graveyard.

Edwinstowe attracted many dedicated, hardworking and sincere vicars. In 1835 the Stipend (wages) were £639 a year which meant they could afford 2 curates. The vicar of east Retford received only £140. 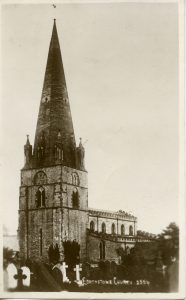 John Robert Turing was the vicar of St Mary’s Church, Edwinstowe from 1875 until 1884. Born in Batavia, Dutch East Indies, he graduated in mathematics at Trinity College, Cambridge in 1848, abandoned mathematics for ordination and became a Chaplain of Trinity college. In 1861 he married Fanny Boyd and left Cambridge for a living in Edwinstowe, where he fathered 10 children – two died in infancy and the surviving four girls and four boys. His parish included Ollerton (looked after by an assistant curate), Budby, Carburton and Clipstone.  In 1835 the total stipend was £639 out of which the vicar paid £140 for two curates.  As a comparison, it is interesting to note that at that time the vicar of Worksop received £388 a year and the vicar of East Retford only £140. 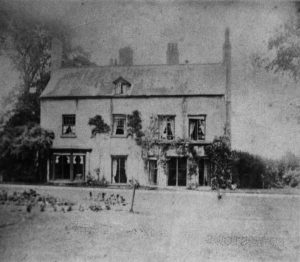 A magazine “Home News” approved by the Queen reflected the Victorian times, and in 1880 Rev. Turing decided to circulate a free copy of the magazine to 200 families in the parish, into which he added local information.  He hoped that sufficient subscribers would be found to make it worthwhile to circulate future editions for the sum of 1d. This proved to be the case. (“Home News” was the forerunner of today’s parish magazines.)

There were differing views over his attitude to his “flock”.   Some felt he did not fit in, yet he worked hard holding services regularly, with additional ones being arranged for special

seasons and occasions.  Harvest Thanksgiving Services were well attended, whilst the one held in 1883 held an additional interest: “The Lamps lighting it up brilliantly were used in church and were very much admired. The congregation in the evening was exceptionally large.”.  Previously Evensong was in the afternoon. The following article published in the Nottingham Journal on 18th September 1874 records the Rev. Turing’s outing with the Church choir:

The vicar was a regular visitor to the School where his wife and daughter (Fanny*) taught occasional needlework and knitting lessons.  In addition to the Sunday School, there was a Sunday School Club, and a Sunday School Treat.  He started the Girl’ Friendly Society in 1875 with the support of the Anglican Church as a pioneer youth organisation to protect working-class country girls who left home to take up urban employment. All of which ensured that the young people of the village were not neglected.

At Rev. Turing’s induction and institution, the Suffragan Bishop of Nottingham who officiated wrote that “A considerable number of Parishioners were present, who took a manifest and devout and intelligent interest in the service.”   After taking a while to organise things to his liking, and seeing some reward for his efforts, Rev. Turing suffered a bout of ill health necessitating time away from church duties.  During his absence various changes had taken place contrary to his expressed wishes.  On his return he was so disgusted with what had happened during his absence that he cut from the Vestry Book the three pages on which some of the events had been recorded and against a comment that “decreased collections were probably due to the severe winter and consequent reduced employment”, he wrote  “The cause of the decrease is the absence of the Vicar” .

However, he wasted little time before attempting to reassert his presence and zealously visited his parishioners.  In one month, he visited 156 out of 217 families in Edwinstowe, 37 out of 53 at Clipstone and 6 out of 32 at Budby. The remainder would receive a visit soon after. Sadly, after suffering a stroke Revd. Turing resigned the living in 1883 and spent the remaining few months of his life in Bedford.

* Lady Fanny Jean Turing Trustram Eve was a well-known social reformer. She stood out among the many exceptional women because of her different activities, as a Conservative Party politician and her WW1 work.

Her nephew and Rev. Turing grandson, was Alan Mathison Turing, the renowned computer scientist, and mathematician who broke the German Enigma Code at Bletchley Park. Winston Churchill said of him that he had shortened the Second World War by two years.

1884 1st Nov.  Henry Telford Hayman M.A. pr Revd. Hayman, was an amateur county cricketer, musician, a Freemason and a keen fox hunter. He was one of the Edwinstowe’s most popular vicars. He was also chaplain to the Robin Hood Rifles.

1907 16th July Revd. Edward Vines Bond  M.A. pr He came to Edwinstowe just as the new vicarage was built on Mansfield Road. He was particularly interested in History and Archaeology. He discovered the site of St. Edwin’s Chapel and hermitage in the forest near King’s Clipstone. He persuaded the Duke of Portland to erect a cross and a plaque to mark the site.