The Bow Street Runners, London’s first police force, were founded in 1749 by magistrate Henry Fielding. They were disbanded in 1839. 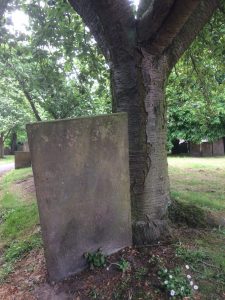 At the top of the steps leading to the oldest part of St. Mary’s Church burial ground, stands a gravestone to the memory of Henry James Perrenee. The inscription reads:  ‘He was one of the old Bow Street officers, and for several Years Constable and Assistant Overseer of the Parish of Edwinstowe. This stone was erected to his Memory by a few of the Parishioners.’ 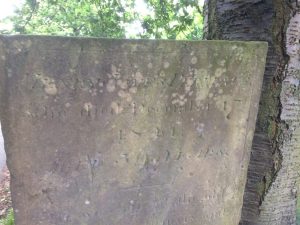 The following obituary appeared in the Sheffield Iris on 28th December 1841:

‘At Edwinstowe on Friday 17th after a short illness Mr Henry James Perrence aged 39 years. About 9 years since, Mr Perrence was engaged by Earl Manvers and the principal farmers in the neighbourhood of Edwinstowe, as a police officer, and he discharged the duties of that office so efficiently, and with that moderation and good temper, as to ensure him the approbation of all classes. The deceased was a member of the Birkland and Bilhaugh Lodge of Nottinghamshire, Imperial Order of Oddfellows, and his funeral was attended by upwards of 100 members of the Birkland and Bilhaugh and the True Briton Lodges. He was generally respected and the principal farmers and tradesmen of the village and neighbourhood followed his remains. Upwards of 300 were present on the occasion.’

In the 1841 Census, when he joined the Oddfellows (1835), Perrence gave his occupation as ‘saddler’. Henry Lamport, a plumber and glazier from Budby, assisted him as one of Edwinstowe’s police constables.  Opposite the Jug & Glass you can still see heavy chains attached to the wall of the old lock-up. Two crimes were so serious that a reward was offered in the Police Gazette/ Hue and Cry.

May 1840, Charles Turner’s wife residing in Eakring was proceeding from Kneesall to Eakring, when she was met on the road by John Woombell of Kersall who violently assaulted her, and a Warrant was issued for his apprehension.

“He’s about 28 to 30 years of age, 5ft 9ins high, rather inclined to be round-shouldered, blue eyes, sharp pointed thin nose, thin face and blushes when any one is speaking to him, dressed in a blue smock frock which had been washed, and trousers and strong heavy half-boots, his hands are stained by hop-binding. Whoever will give such information to Samuel Smith, excavator, Eakring or Henry Perrence chief constable Edwinstowe, as shall lead to the apprehension of the said John Woombell, shall be handsomely rewarded, and have all expenses paid, on conviction. Bow Street.”

October 1840 The dwelling-house of Mr John Grovenor, situate at Ollerton, in the county of Nottinghamshire, was entered by forcing the shutters, and about £15 in Crowns and Half-crowns stolen therefrom.  Whoever will give such information to Mr. John Grovenor aforesaid or H. Perrence, chief constable Edwinstowe, of the offender or offenders shall receive £5 reward from the Ollerton Association, and a further Reward of £10 from Mr J Grovenor on conviction.

August 13th 1841 A letter appeared in the Nottingham Review:

‘Gentlemen, last week the churchwardens of the neat rural village of Edwinstowe summoned before the bench at Mansfield Mr. Charles Tudsbury, formerly a parishioner, but now residing in the Isle of Ely, for church rates. I understand that when the matter came before the magistrates, they found figures in the rate had been altered and upon the discovery, the Ecclesiastical Court declined to interfere any further in that matter.

Perrenee, the constable, it turns out, has been to both Liverpool and to the Isle of Ely after Mr. Tudsbury; these journeys and the lawyers’ charges, in this and the other rate affair, will form a very nice sum for the parishioners to pay and for nothing. These proceedings are pretty generally known in the village, and a discontent- a natural discontent – is manifesting itself…

Since writing the above, I have thought that the parish officers have no occasion to engage Perrenee to collect church-rates or poor-rates, they may easily manage these things themselves. At any rate, I hope the poor-law commissioners and the auditor will not allow charges for any salary for him out of the parish fund. If Parish officers don’t think proper to collect, but get Perrenee to gather for them, they ought to pay him.    A VOLUNTARY           [Note -It was quite common for the rates to be altered illegally]

Gentlemen, I learn that Perrenee got the summons against Mr Tudsbury, and swore to the Magistrates that he was a Churchwarden. He is no more a Churchwarden than I am…He probably had an eye upon a journey to Liverpool and then to the Isle of Ely. He also acts as Deputy-Overseer, but he is not one according to the law, and if he is not, I fancy he cannot compel the ratepayers to pay their rates. I again say, I hope the Poor Law Commissioners and the Auditor will look into these things. If the parish officers will not do the business of so small a parish themselves, they ought to pay the deputy.’ A VOLUNTARY

January 1829 George Childs (24) and William Jennings (25) had stolen various items of clothing from Joshua Nunn’s cobblers shop on Christmas Night. Perrence’s evidence resulted in a death sentence for both men, but the Prosecutor recommended,

“Mercy on account of their not having done any personal harm.”

In 1841, Childs (alias Giles) was indicted for feloniously being at large without lawful cause…before the expiration of the period for which he had been ordered to be transported. Identified by Perrence, George Childs was sentenced to 6 months and then transportation for life.

December 1830 whilst working as a saddler in London, Henry James Perrence saw James Surgood stealing a truss of hay, bran, beans etc. He notified Webster, the local constable and helped in the search at the Swan Inn in Bayswater. He gave evidence at the Old Bailey. Surgood (27) was sentenced to seven years, but his co-accused William Ingledon (30), got fourteen years for handling stolen goods.

Although Henry James Perrence’s baptism, around 1803, has not been found, it seems likely that he was the son of Henry Francis and Mary Perrence who kept The George public house in Chelsea. They had three daughters – Marianne (who married a silk mercer), Eliza Matilda and Anna Maria. In 1817, Mary appeared at the Old Bailey giving evidence against James Dunn who stole dishes, plates and wine glasses from their public house. In 1828, she gave evidence against Joseph Baker who had stolen a gold chain and various articles of jewellery from her husband. Henry Francis Perrence in 1838, died in the Licensed Victuallers Asylum (alms-houses) on Old Kent Road, Camberwell aged 80 years.