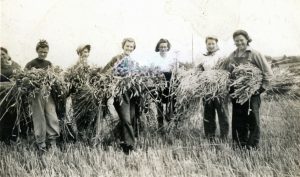 I won a scholarship to the school in 1938. I travelled to Mansfield from Edwinstowe on the Ebor bus, a double decker. Upstairs were boys and girls from all three grammar schools. The school extension was just opened and we wore ‘ward’ shoes to protect the floors. I took sandwiches for lunch and paid 6d a week to sit in the dining room, use the cutlery and get a glass of water.

When war broke out the government decided to give all children school meals when rationing started to ensure they got a balanced diet. Soon we shared the school with one in danger from bombing. We studied in the morning and had games in the afternoon.

During the first half term of 1940 we were sent to where the Mansfield Council had dug up flower beds to plant potatoes. We were given a bucket of potatoes and told to ‘walk a step and drop one’ along the row: our first war work.

In the 5th form we were asked to volunteer to spend two weeks of the school holiday harvesting for the war effort. We were sent to Lutterworth where we slept in the school hall on paillasses. We were then assigned in twos to farms. Two of us went stooking corn and then pitching it on to the horse-drawn cart in company with an old man and a teenager. We discovered muscles we didn’t know we had, but the weather was perfect…

The next year we went fruit picking, mostly blackcurrants. I can’t remember where but I remember the large horseflies.

Because my Mother always kept me a dinner for when I got home after having had a school dinner I put on weight and was 11 stone at 15.

Near the end of the fifth form our careers advice consisted of a talk by the Head on teaching, a talk by the Matron on nursing and a talk by the Librarian. These were the choices for those without money to go to University. I chose teaching because my Mother had told everyone after I received the scholarship “…Margaret is going to be a teacher…” I suppose I was brainwashed but I think it was probably the best choice. I am still giving talks on the History of Edwinstowe. 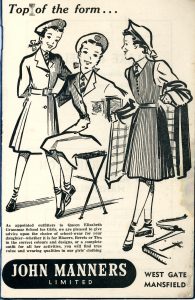 Uniform worn by Margaret for the Queen Elizabeth in 1938 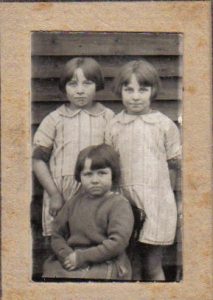 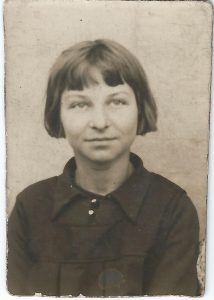 “I know that after the First World War, the Hart family lived in Egmanton on Mill Farm and that when I visited with mum about 20 years ago, the farm had been demolished and Mill Hill Lodge was being built.  My grandfather, Edward James Hart, had been in the Royal Horse Artillery and worked on the Railway initially but about 1925 he went to work at Thoresby Colliery as a Pit Sinker/Drifter and of course, when the New Village was built at Edwinstowe, the family moved into no. 38 Second Avenue.   Below a picture of my grandfather at Thoresby Colliery with the rest of the team.” 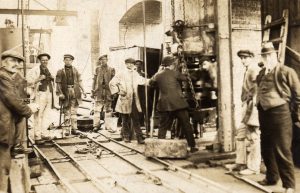 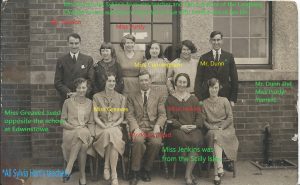 “Approx 1933 is a photo of the teachers, most with names.  I had fond memories of Miss Purdy and recalled the picture of the Laughing Cavalier she had on the wall.  I loved him from that moment.  You will also notice that Miss Purdy married Mr. Dunn and that Miss Greaves lived opposite the school and Miss Jenkins was from the Scilly Isles.” 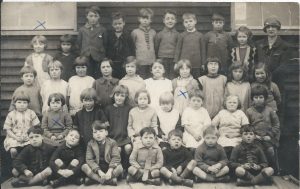 “1927 photo of Edwinstowe Council School. I am the first girl on the back row, my eldest sister, Mary Hart is on the next row down, 4th from the right;  and our youngest sister, Cecilie Joan Hart (always called Joan), is second row up, 2nd from the end.” 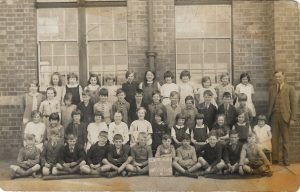 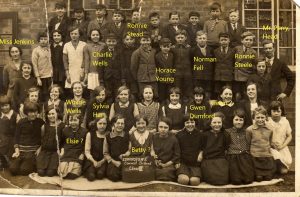 “My Grandmother, Emily, and Grandfather, Edward were apparently very involved with the Wesleyan Chapels at Edwinstowe.  My Grandmother played the mandolin, and the 3 girls also learned to play instruments but what mum has recalled to me and my sister all our lives, were the Operettas and other concerts that they were encouraged to participate in, particularly ,The Magic Rose, The Enchanted Forest, and The Three Old Maids of Lee.  My Grandfather was involved with the Boys’ Brigade and took the boys running in Sherwood Forrest and for athletics.  I understand he also used to cut the men and boys’ hair on a Saturday morning for a penny each to help raise money for missionaries.” 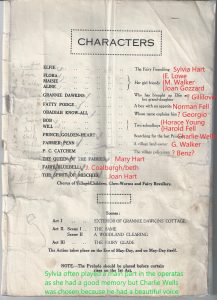 A labelled page from an Operetta called The Magic Rose as several of the children in the class of 1933 had parts, Sylvia had the main part of Elfie, The Fairy Foundling, for her good memory and Charlie Wells played Prince Golden Heart as he had “a beautiful voice” to quote mum. 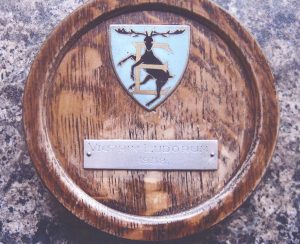 The Victor and Victrix Ludorum I wonder if any of the Acorn readers can remember them or indeed still have one in their possession? These awards were given each year at King Edwin Secondary School to the boy and girl, respectively, who obtained the most points for their House Team at the Annual Sports Day in July. For those of you who may never have seen one before it is a small wooden plaque, oak I believe, inlaid with the school badge and manufactured by the school Woodwork Teacher, Mr Eric Matkin. Here is a photograph of my Victrix Ludorum won in July, 1958, and I can hardly believe that 50 years have elapsed since the time I won it at the School Sports Day in July 1958.
My house team was Clumber and I had just turned 15 years of age. I have always cherished this prize over the years and it takes pride of place on my lounge wall here in Scotland, to the right of the fireplace, as that seemed the best place for it, underneath a watercolour of the Major Oak. Some keen-eyed “Old Edwinstowians”, when visiting, have spotted it and commented. In
some ways I felt I had cheated my way to winning it all those years ago for I decided to enter the
categories where I knew there would not be much in the way of competition. Therefore, I chose
the high jump, the discus, the javelin and, of course, the relay team. Of course, I came 1st in two of the disciplines and 2nd in the third and can’t remember how the relay ended up but I was never a sprinter – more of a long-distance runner. Amazingly, I broke the high jump record which I was pleased to see remained unbroken for a good few years. After my success at the high jump, I was entered by the school to jump at the County Sports but, alas, a certain boy from Second Avenue asked me out to the pictures on the very day of the Sports and I accepted. So no contest for me! My athletics career started and ended in the summer of 1958. To justify my achievement, I would like to make clear that I did take it all very seriously and trained very hard during the preceding 6 weeks by running to the red bridge and back every lunchtime. Also, on my daily paper round, I tried to be quicker and quicker each day. It must have helped, for I was never as fit again. So, as the summer of 2008 approaches, and I sit in my armchair watching the Olympic Games on television, I will glance over to the wall and to my Victrix Ludorum, dreaming of what might have been, if only I had gone to the County Sports instead of swanning off to the pictures with a boyfriend. Great memories of happy times and oh! to be young again in Edwinstowe, running freely, with not a care in the world.
Jean E Thomson (neé Jean E Edwards)
Dunblane