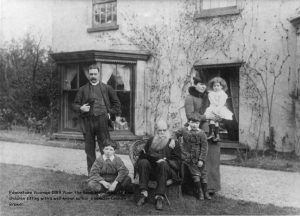 If you had visited Edwinstowe vicarage in the 1890s you might have encountered a bald-headed gentleman with a long, grey beard and large, grey-blue eyes pottering in the garden. As Reverend Dr. Ebenezer Cobham Brewer told a reporter, gardening was his only vice.

In his mid-eighties, he was busy revising his famous Dictionary of Phrase and Fable – checking 1,300 pages at the rate of 48 double-column proofs a week. The Dictionary was first published in the 1870s and it had already sold 100,000 copies despite the initial reluctance of the publisher, Mr. Cassell, who thought it was a “doubtful speculation, quite beyond the wildest reach of the imagination” and urged Brewer not to make it too learned nor include too many Latin quotations.

True to his recipe for a long life: “Little to eat, less to drink, little sleep and plenty to do”, having worked until 3 or 4 o’clock in the morning, he was still down to breakfast every morning at 9:00am sharp.

He spent time each evening with his grandchildren, “telling stories, showing treasures, he had collected in various countries and relating his experiences at the court of Napoleon III”.

He was a welcome visitor at the village school where he helped the boys with their mapping skills and awarded an annual prize. Although, he had never had a parish, he often assisted his son-in-law, Reverend Henry Telford Hayman, preaching sermons and conducting weddings. He also took a lively interest in the restoration work on St. Mary’s Church, which was completed just after his death in March 1897.

Born at Norwich in May 1810, Brewer was by his own admission, “very backward and idle as a boy”. His three brothers made successful careers – John Sherren, a University Professor; Robert, a Baptist Minister and William, a doctor and MP for Colchester.

Ebenezer studied Law at Trinity Hall, Cambridge, supporting himself by his writing. Probably hoping for a college fellowship, he was ordained in 1838. However, when he left university he taught at his father’s school succeeding him as Headmaster.

In an age of self-help, his educational books were instant best-sellers. The first, A Guide to Science, in question-and-answer form, was translated into many languages and sold half a million copies. https://archive.org/details/b21497126  He prepared a French version for the Prince Imperial, using examples from French life. Another 40 books followed, covering everything from miracles to single-entry book-keeping.https://archive.org/details/charactersketche01brewuoft

In the 1850s, he joined Cassells, which published books in affordable parts for poor people who wanted to improve themselves, such as The Popular Educator at 1 penny a week. When the children’s series, My First Book of…. Was launched, Brewer wrote all twelve books.

In 1856, he married a clergyman’s daughter, Ellen Mary. After her death in 1878, he moved in with his eldest daughter, Nellie, at Ruddington Vicarage. His grandson Perceval Hayman, recalled his grandfather’s bed-sitting-room wall “covered in plain white paper upon which he used to write in pencil stray memoranda and the names of any particular interesting visitors and the dates on which they came to see him”.

Dr. Brewer, moved with the family to Edwinstowe in 1884. When the beautiful Duchess of Portland visited the vicarage she insisted on going upstairs and carrying on a long conversation with Dr. Brewer sitting on his bed, “a highly informal proceeding in those days, which particularly pleased the old gentlemen”.

He told a reporter from The Westminster Budget, “My method is very simple. I always read with paper and pencil at my side and jot down whatever I think may be useful to me and jottings I keep sorted in different lockers. This has been a lifelong habit with me and compiling them into a volume consists chiefly in the selecting, sorting, explaining, correcting and bringing down to date. My literary references are all contained in these pigeonholes behind me, each letter having its own bundle of slips in their turn all running in alphabetical order. This system of common placing I have kept up regularly for nearly seventy years, and the fruits of it are embodied in my various books. In fact, the Phrase and Fable Dictionary and the other books of that class may be said to be merely different sections of one gigantic commonplace book. The labour of all this writing out and indexing has been very great, though a labour of love for me. I calculated once that in my time I must have covered manuscript enough to fill this room from floor to ceiling…”. https://en.wikipedia.org/wiki/E._Cobham_Brewer 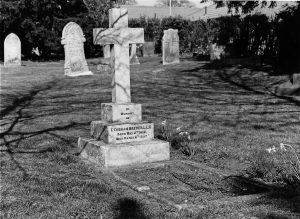 Cobham Brewer died on the 6th March 1897. The Evening Post reported, “by the time fixed for the ceremony a large number of the residents of Edwinstowe has assembled in the churchyard to pay a last tribute of respect. The mourners included the Countess Manvers. The coffin was covered in beautiful wreaths and choice exotics. The undertaker, Mr. Herbert Woodhead, was paid £6/10s for the oak coffin, £1 for 4 bearers and £1 for 6 pairs of gloves”.  Brewer’s grave is marked with a cross and is under a beech tree a few yards from the west face of the tower. His name lives on not only in updated versions of Phase and Fable, but also in such improbable publications as Brewer’s Cinema.

Have you heard this poem by Brewer before?

Little drops of water,
Little grains of sand,
Make the mighty ocean
And the pleasant land.