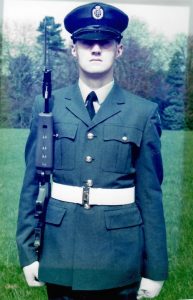 As journeys go, Sam’s flight to Afghanistan ‘wasn’t too bad’. Since he joined the R.A.F in 1996 he has certainly travelled the globe, mainly places that we don’t find in our holiday brochures.

Leaving Brize Norton on April 23rd, this was Sam’s second attempt to join the British Forces in Afghanistan.

His first ‘stand-by’ had been called off earlier this year after a training exercise in Oman.

Trained RAF Chef, Senior Aircraftsman Ford is a former pupil of King Edwin Primary and Rufford School. He has served as a member of the peacekeeping corps in Kosovo, in the desert conditions of Saudi Arabia, and the Arctic climate on exercises with the NATO in Norway. He has also fed 1,200 combined forces in the Falklands. In fact, he was preparing for a second visit to the Falklands when news came through that he was to fly to Kabul instead. Arriving at Bagram airport in blackout conditions after a 12 hour journey in a C17, not the most peaceful or comfortable of flights, Sam wondered ‘what he had let himself in for’ In daylight he discovered a camp surrounded by the mountains that we so frequently see in media coverage from this part of the world. On the whole the camp is not too bad and because it is slightly better equipped than others in this area it is known as ‘Center Parc’s. Living quarters are in the old air base, which is littered by the destruction from the Russian occupation of Afghanistan.

Sam is always pleased to see familiar faces, especially those from back home. He was delighted to come across Andy Brown, another Edwinstowe lad, who is serving with the marines. Small world, isn’t it?

Carol Ford – written for the Acorn

In Service of Peace and Freedom – Mark Barlow

Mark Barlow, of Edwinstowe, served with the RAF in Croatia, being based in Split. He was the youngest member of his contingent.

In common with all servicemen and women who were dispatched to the Balkans last year, Mark was awarded a bronze campaign medal “for service with NATO in operations in relation to the former Yugoslavia, during the period 24 May to 19 July, 2000.”

A permanent certificate, presented to each participant, and signed by the Secretary General of NATO, bears the inscription “In Service of Peace and Freedom” and features the flags of the nineteen member nations beneath the NATO flag. Attached to Mark’s certificate, as with all others, is a blue and white bar ribbon which Mark may wear on his uniform.

Upon enlisting in the RAF, in November, 1998, Mark spent seven weeks on an initial training course at RAF Halton, Buckinghamshire.

His parents, Mavis and Michael, attended his passing-out parade, of which they have a permanent record in the form of a video.

Mark moved to RAF, Cosford, near Wolverhampton, where he spent a year training as an Air Frame Mechanic. He was then posted to Odiham, Hampshire, where he worked in support of Chinook helicopters. As recently as March, 2001, he took part in a routine exercise on board the aircraft carrier Invincible.

In the summer of 1999, while stationed at Cosford, Mark was one of a detachment of RAF personnel who formed a bodyguard at Windsor Castle when the Queen was entertaining the President of Hungary.

Mark is a keen Nottingham Forest fan, but his prime interest is in sports cars and he is the proud owner of an MR2.

He is conscious of the need to keep physically fit and, in October, 2000, he took part in the Great North Run, an annual half-Marathon, which follows a course along public roads between Newcastle-on-Tyne and South Shields. He reached the finishing line in a commendable time of less than two hours.

Lieutenant Commander Rachel Firth has been appointed as the first female Senior Air Traffic Control Officer at the Royal Naval Air Station, Yeovilton, in Somerset. Rachel who was born in Peterborough and was educated in Portsmouth and at Brunt’s School in Mansfield, joined the Woman’s Royal Naval Service as a Radar ’Wren’ in 1981.

She subsequently became the first female Air Traffic Control Officer to go to sea, having volunteered for sea service in 1990, and took part in a global deployment in HMS Invincible in 1992. Having been endorsed as a SATCO, Rachel can now claim to have held every Air Traffic Control Post open to Royal Navy ATCOs, including a tour as an instructor at the ATC School at RAF Shawbury.

As SATCO, Rachel is responsible for the provision of a safe and efficient Air Traffic Control Service to all military and civilian aircraft operating from Yeovilton or in the surrounding airspace. To achieve that, she manages a team of 35 controllers and 16 assistants, plus 35 fire station personnel. When not controlling aeroplanes, Rachel is an enthusiastic and accomplished horsewoman. She owns two horses and is currently the RN Show Jumping and Eventing Team Captain. She has represented the Royal Navy in Joint Service equestrian competition since 1982 and was a member of the RN team that won the Queen’s Cup and Queen’s Plate at Royal Windsor in 2002. Rachel also has an interest in classic cars and owns an MGA Mk 1 Coupe, which she hopes to rally. Rachel’s parents, Jean and John Firth, live on Paddock Close. As a former Edwinstowe resident she enjoyed reading the Acorn.

In a Christmas edition of Acorn Desmond Pearson, born and raised in Edwinstowe, wrote of his first six years in the Royal Navy, which culminated in a holiday flight to Melbourne where his uncle had settled with his family.

1970 was a significant year in Desmond’s life because he rejoined H M S Dryad as an instructor. Of greater family significance Des’s wife, Valerie, gave birth to Rachel, on 4 November in that year. Rachel has now been married for eight years and has a son, Christian. “Rachel met her husband, Mirko, when she was working as a Bar Supervisor with P & O Caribbean Cruises, and they now live in Ferrara, an ancient walled city in Northern Italy, where they own a bar/cafe.  In January 1972 we all moved for two years to Naples, on what is termed a married accompanied appointment, in which I served with Allied Forces Southern Europe under NATO command. During this time Val’s mum and dad and my mother visited us and we enjoyed several outings. Rome was first on our list and we have vivid memories of the Coliseum, St Peter’s in Vatican City and the Trevi Fountain. We also visited Mount Vesuvius and Pompeii.  On returning to England, I joined HMS Tiger (1974-77). Again most of our time was spent abroad, in the West Indies, in South America and in the Mediterranean, where we berthed in several well-known ports. During a brief maintenance period I was loaned out, as a helicopter controller, to HMS Naiad, which was serving off Iceland during the Cod War. This was not a period to savour, what with the severe weather conditions and the risk of being rammed by one of Iceland’s gunboats. I was promoted to Chief Petty Officer and, on my leaving HMS Tiger, in 1977, Valerie and I bought a house in Portsmouth where we still reside.  Having completed another stint as an instructor at HMS Dryad, I joined thje staff of Flag Officer First Flotilla Seaborn Admiral, serving from 1979 to 1989. We served all round the world, the supreme highlight taking us to the Yangtze River on HMS Kent, the first British warship to venture there since the sinking of HMS Amethyst.  During the Falklands conflict I was entrusted with the instruction of ships’ operation teams at HMS Dryad, prior to their deployment in that campaign.  From September 1982 to October 1985 I served with the Flag Officer Sea Training (Admiral’s Staff) in Portland, Dorset. We trained ships’ operational teams at sea, in realistic conditions, to bring them up to approved operational standards, prior to their going into active service.  After yet another period at HMS Dryad I joined my final ship, HMS Intrepid (1987-1988).”

At this juncture Des confessed to feeling rather bored with his repetitive existence so he sought a new dimension to his life: “I joined the Sultan of Oman’s Navy.”

Tim and Antony Wingate both have responsible jobs, Tim at sea and Antony with the RAF. When quite young they were always happy to wear uniform and Janet, their mum, says, “It doesn’t seem two minutes since they were in the cubs.” Has Brian, their father, influenced them? After all he has been in the Fire Service for 23 years. After obtaining his GCSE, Tim joined the naval cadets and, after studying for his A levels, he was welcomed aboard by P & O Liners.  At twenty-one he passed his Higher National Diploma (HND) in Nautical Science and was appointed 3rd Officer on the Oriana. He continued his studies and, in April 2004, he achieved his HND Class 1, becoming a Master Mariner. Tim has so impressed P & O that he has been promoted to 1st Officer on the Coral Princess, the latest of the Princess Cruisers. On the evening when I spoke to Janet and Brian, Tim was in Alaska. Modestly, Tim claims to be a driver, an understatement when his driving responsibility is for a 90,000-ton passenger liner. In the normal course of events his experience of navigating will lead to his promotion to the rank of Captain.

Antony enrolled in the RAF as a Senior Aircraftsman when he was seventeen and a half. His basic training, at RAF Halton, was followed by a posting to the Falklands, where he served for six months with the Royal Navy in South American waters. He spent part of this duty in Uruguay. Antony was then attached to Neatishead, where he studied radar and its application to ground control of aircraft. He was then directed to RAF Boulmer where he is a member of a ground control team. A follow-up course led to his promotion to the rank of sergeant, in March 2004, just prior to his twenty-fifth birthday.

Antony is following in the footsteps of his grandfather, Arthur Wingate, who was a sergeant in the RAF in World War 2. 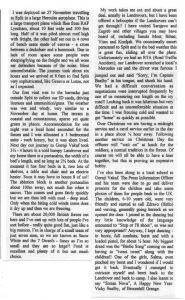