Sherwood Forest, also known as Bilhagh and Birklands is a remnant of an older Royal hunting forest. The forest today is a mixture of woodland, low shrub, pasture and heath. Between 1154 to 1485, Sherwood was known as being so thickly overgrown with trees, and branches intermingled with each other, that it was difficult to follow paths. (An ideal place for outlaws to hide and wander unseen from Mansfield to the Yorkshire coast) 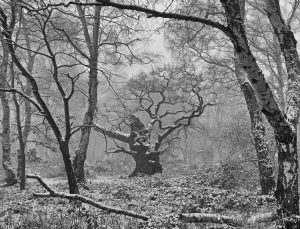 Oaks from the forest have been used for building for centuries.

In 1336, Henry de Edwinstowe, vicar of Edwinstowe, was granted license to take trees from the forest to make a hundred quarters of charcoal.

During the Civil War, 1642 – 1651, the Countess of Newcastle, whose husband was Governor of Newark Castle took a large quantity of oaks from the forest to repair the castle. She kept the money for herself and the repairs were not undertaken. With support from the deputy-warden of the forest she then took more timber and they shared the money made between them. 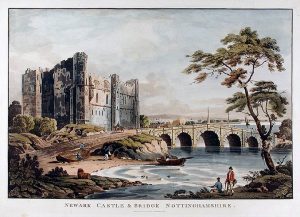 In the 1600s, many oaks were felled for buildings, furniture and ship construction (including Nelson’s fleet), others were lost when land was cleared for farming.

Lightning struck the church spire in 1672. Edwinstowe parishioners petitioned Charles 11 for repairs. He agreed that 200 trees could be felled and sold to cover costs.

In, 1790 ten oaks were used for the roof of St. Paul’s Cathedral in London.

A survey in the forest, at that time, showed that there were 10,117 oaks remaining.

During the 1800s, many trees were sold by Auction/Robinson at the Hop Pole Ollerton and Edwinstowe. (Just a few of the auctions that took place at that time this list is almost endless.)

The sale of timber from the forest, during the 18th and 19th century, paid for the palatial buildings and formal gardens of the Dukeries Estates, such as Thoresby, Welbeck, Rufford and Clumber. Also, at this time, there were some large-scale plantations as they invested in the future of wood. 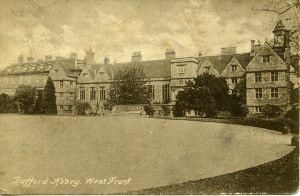 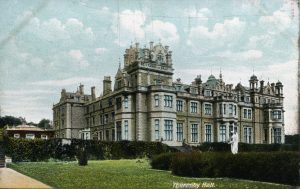 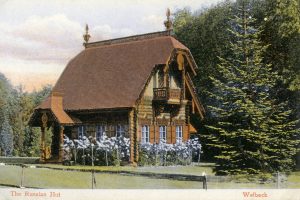 The Russian Lodge or Russian Log Hut  was purchased at the Russian Exhibition of 1874 by the 6th Duke of Portland and erected in the Birklands.  It is said that It was made of logs and didn’t have a nail in it.  It was pulled down in 1954 when it became unstable and all the timbers were taken back to the estate. 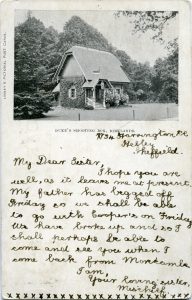 Oak has been used for many timber framed buildings as well as the roofs of many cathedrals and churches throughout the UK. 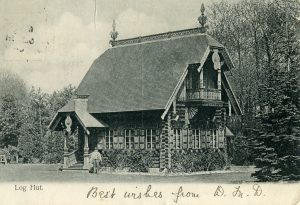 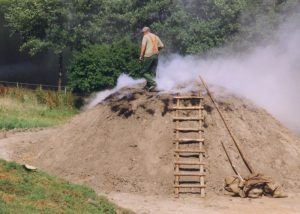 Over the centuries, resources from the forest have supported everyday life. Brushwood and twigs from silver birch and other trees were used for domestic fuel and charcoal burning.  Landowners used techniques such as ‘coppicing’ and ‘pollarding‘ to produce poles, canes and lathes for building and crafts. Pigs were fed acorns and the oak of bark was used for leather tanning.  Cattle and deer still graze in the open forest areas and the berries on the holly bushes provide winter food.

Today, 2017, wood from Sherwood Forest is still being used. Launay’s Restaurant, Church Street, Edwinstowe is to have a new bar and table tops made from recycled wood.

In celebration of the Army no longer using the forest as a training ground this plaque was placed on Forest Corner. In commemoration of the establishment of the Sherwood Forest Park and the part played by C.C. Miriam Beardsley in stimulating public opinion these trees were planted by the Edwinstowe Parish Council 1969. 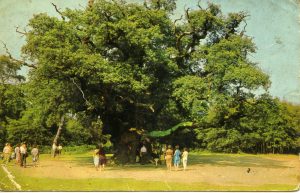 The Major Oak is an English or pedunculate oak and stands in the heart of the present forest. It has three names, ‘The Major Oak’ (named after a local historian, Major Rooke in 1790), ‘The Queen Oak’, a C18th name and ‘The Cockpen Tree’ as it was used by locals as a pen to hold cockerels before a cockfight. 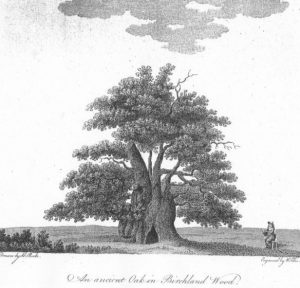 In the mid-1800s, Christopher Thomson measured the oak and wrote,

‘Look well at his broad and age-furrowed flanks; see his antique roots thrown into the soil …. with a circumference of ninety feet; a little higher up, six feet from the ground his girth is thirty feet; and, of his fifty arms, one alone is twelve feet in circumference. The oaken wreath has a diameter of over two hundred and forty feet!’

More recent measurements estimate that the oak is about 23 tons with a girth of 10m (33feet) and a spread of 28m (92feet) making it the largest oak tree in the UK. 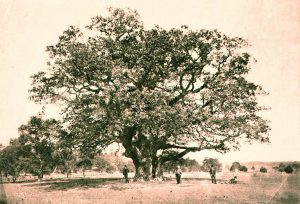 Its age is debatable and possibly ranges from between 800-1,000 years. Most oak trees take 300 years to grow, 300 to live and 300 years to die. This is why it possibly needs wooden poles to help support its branches. The hollow trunk is formed by fungi.

There are just over 1,000 ancient oak trees remaining now.  However, it has to be remembered that an old dying oak tree sustains a vast number of wild-life, including some of Europe’s rarest invertebrates, some unique to Sherwood.

The Major Oak showing the opening in the trunk and the lead, now removed, which was  added to support the tree.

A Guardian or Custodian was employed by the Thoresby Estate to care for the tree and support tourists. He made a little money by selling drinks and postcards.

In 1960, this was written about Tom Thompson

Tom Thompson, 80-year-old guardian of the Major Oak – he holds office from the Thoresby Estate, and proudly wears his armband of authority, spends most of his working hours at the tree, protecting it from the thoughtless smoker, and vandalism of the souvenir hunter. He is by way of being an authority on Robin Hood, whose life and legend he has studied.

He tells us that the Major Oak is 64 feet in circumference. Its hollow was found – or made by Robin Hood’s men in 1216. Today, that hollow has been known to shelter 34 school children. It must have been a squeeze, but Tom packed them in himself! The greatest number of visitors in one day are approximately 15,000 – on August Bank Holiday, 1957 – a tribute to the grip that Robin Hood has on the minds of the English.

Tom points to a number of shapes seen in the gnarled boughs of the majestic old tree, the heads of a bulldog, a rhinoceros, a monkey, a buffalo, a ram, an elephant and of course a stag, and a figure of an elephant sitting up!

“I’ve had people of every race under the sun came up to see the Major Oak in the 10 years I’ve been warden” says Tom.

The above text is taken from a booklet,” A History of the Sherwood Oaks”

Printed by Linneys of Mansfield. “in the Heart of England’s Sherwood Forest. 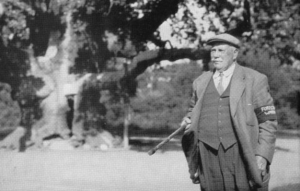 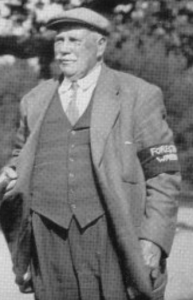 A warden below. You can see him on many old photos and postcards. 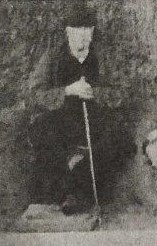 Another Guardian below. Do you know who he is? Contact us if you have further information about the guardians and our wonderful tree.

Over the years the tree has been preserved and protected in a variety of ways. Some more successful than others. 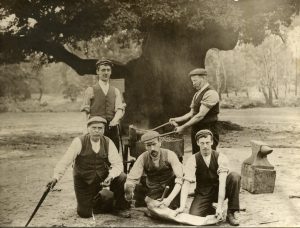 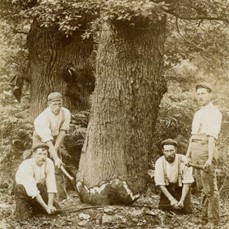 Some trees were still being felled for other uses.

In 2002, Sherwood Forest was designated as a National Nature reserve with SSSI status (Site of Special Scientific Interest). 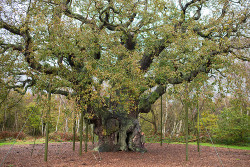 In 2014, the Major Oak was crowned ‘England’s Tree of the Year’ via a public poll by the Woodland Trust.

Other ancient oaks include: 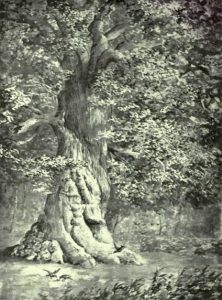 This was a remarkable tree as its trunk resembled a spinal column with a strong base and immense roots which many believed gave it boundless strength. A man from Edwinstowe, Simon Foster, used it to secure his stock under the tree during the night for protection, and from that time it has borne his name. He is buried in St. Mary’s graveyard. 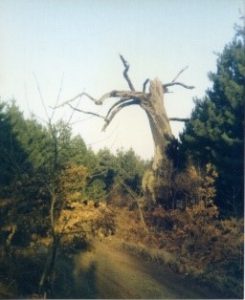 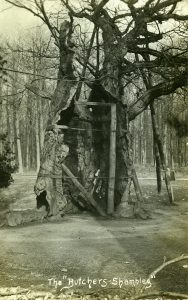 The Shambles Oak was a large hollow tree which used to stand about half a mile west from the Centre Tree near the Black Pool. The tree had hooks on the inside of its trunk and legend says it was a store for Robin Hood’s venison. It was set on fire by picknickers in 1913 and in 1962 was blown down. Close by on the Broad Drive is the Centre Tree so named as it is reputed to be at the centre of Sherwood Forest. The Greendale Oak used to stand in Welbeck Park. The gap in the trunk was wide enough to allow a coach and horses to go through. Supposedly, the 1st Duke of Portland won an after-dinner bet after he drove a coach and six horses right through it. The story also adds that he used a miniature coach. However, after the tree had been hollowed out it sadly died. It is said that Countess of Welbeck Abbey then had furniture made from its branches. Parliament Oak still stands beside the A6075 between Mansfield and Edwinstowe. The tree survives as an offshoot from the trunk of the original tree.
Legend says that in 1212, the king, Edward 1, whilst hunting from King John’s Palace in Clipstone was told of a revolt among the Welsh so he hastily held a parliament under this tree. They decided that 28 Welsh hostages being held in Nottingham Castle would be executed as an example. The Parliament Oak was on England’s tree of the year shortlist for 2017. 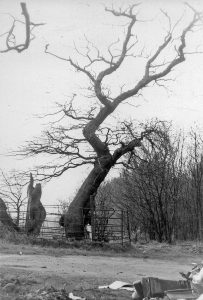 The Seven Sisters was so called as it had seven stems rising from the main trunk. Major Rooke, in 1790, measured its height as 88 feet with a circumference of 34 feet. The loss of many ancient oaks from the forest is sad, but there are records that show that a tall oak with no branches called, ‘The Duke’s Walking Stick’ was self-seeded and produced a ‘Young Walking Stick’. Many acorns were also collected and given to his friends to plant. The original tree, recorded by Major Rooke, was 111ft 6ins high and he calculated its weight as 11 tons.

The Porter Oak name came from having been a gate erected between the two oaks.  Major Rooke, in 1790, measured it as 98 feet tall with a circumference of 38 feet. 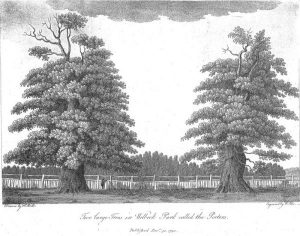 The Cuckoo Birch was a birch tree that grew out of the trunk of an old dying oak tree. It was situated on the path close to the Open Air Theatre.

Sherwood in the twilight, is Robin Hood awake?

Grey and ghostly shadows are gliding through the brake,

Shadows of the dappled deer, dreaming of the morn,

Dreaming of a shadowy man that winds a shadowy horn.

Robin Hood is here again; all his merry thieves

Hear a ghostly bugle-note shivering through the leaves,

Calling as he used to call, faint and far away,

Merry, merry England has kissed the lips of June:

All the wings of fairyland were here beneath the moon,

Like a flight of rose-leaves fluttering in the mist,

Of opal and ruby and pearl and amethyst.

Merry, merry England is waking as of old,

With eyes of blither hazel and hair of brighter gold;

For Robin Hood is here again beneath the bursting spray,