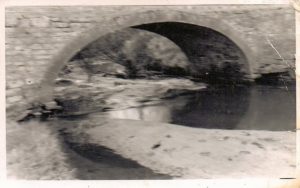 Crossing the recreation ground beyond Sixth Avenue, we passed well-tended allotments, then on by the hedge dividing the draining dyke and the field, to a three-way crossing. On the right was a cart-track leading to Mansfield Road, to the left over the wooden bridge above the dyke to a little hump back red bridge over the River Maun. It was here by the bridge that children paddled and built sandcastles on the bank. 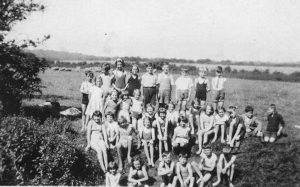 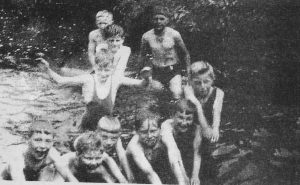 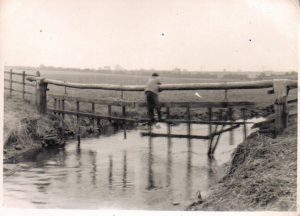 By taking the middle path we came to a small spinney carpeted with bluebells in spring, and down by the river wild orchids and kingcups grew. Two crab-apple trees bloomed and bore fruit amongst the varied trees, and ferns and brambles flourished. Further on we came to the lock gates. When they were closed children learned to swim in the deeper water. Picnics were held along the river-bank and among the gorse or by the old swing bridge.

This was to stop the cattle straying down river. It consisted of a large tree suspended above the river surrounded by large iron rings from which hung heavy chains holding strong branches that swayed with the flow of the river. Facing this was an avenue of pine trees and scrubland where raspberries grew wild. The harvest of elder and blackberries in autumn stocked our cupboard with home-made jams and jellies. Many happy hours spent over the fields live on in the memory.

(Mrs Maxfield moved to Edwinstowe in 1931, and lived on Sixth Avenue for over 70 years.)

The Changing Face of the River Maun, the Lock Gates 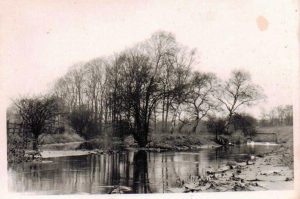 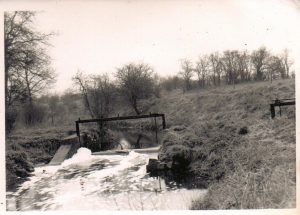 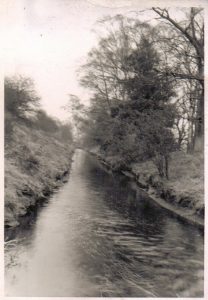 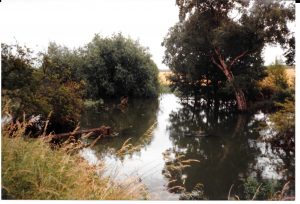 The Lock Gates under water 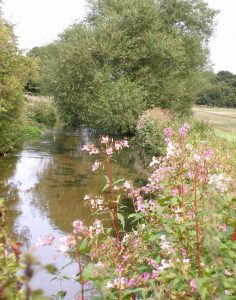 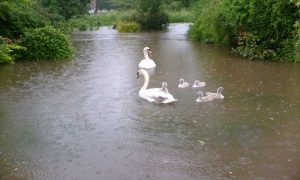 A pair of Swans with their signets swimming in the garden on Mill Lane when the river spilled over its banks during the floods July 2007. 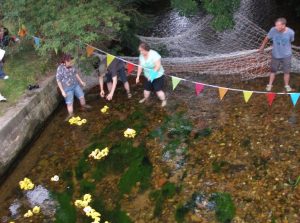 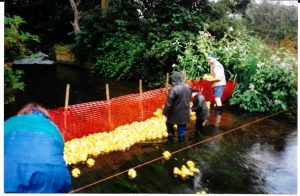 In 1991, the then newly elected Independent Parish Council decided to appoint a conservation officer to improve neglected areas in the village. The first project was the Maun River Project. During the late 1980s, British Gas undertook a major pipe-laying exercise in Edwinstowe. This entailed crossing the River Maun, several lengths of maythorne hedges were destroyed and the area around the Maun Bridge was decimated of its ground cover.

The land had always been neglected but was now totally derelict.

Thoresby Estates willingly rented the land for a nominal fee and the project was on the way. Later on, Thoresby Estates were again approached and three more parcels of land bordering the River Maun were rented to the Council. 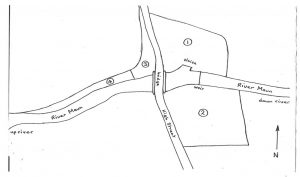 Gill Hancock the first Conservation Officer at that time persuaded the council to erect a seat allowing residents to sit and view the area. 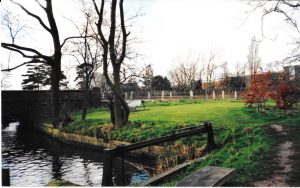 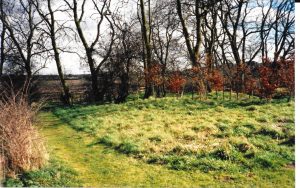 Spadework (an Environmental Group) was contacted and with the aid of volunteers, Schools and some members of the Parish Council, the site was prepared and over one hundred native trees were planted on both sides of the river. Bat boxes were put in place and a derelict neglected plot was turned into a pleasant nature area where after just a few years over twenty five different wildflowers and grasses were identified. A tiny nature trail over what had been a badly run down and forgotten River Bridge was established. The third piece of land overgrown and derelict with a monstrous Seven Trent pipe was cleared and a rustic seat put in place where people can sit and view the ducks and wild fowl. This has been fenced off to keep it secure to protect the nesting birds. A number of years after the Maun River Project had been completed, the Seven Trent Pipe was eventually removed. 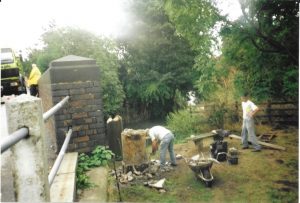 In June 1998. the North Notts. Training and Enterprise Council purchased the former British Coal Offices. A new project was being discussed between the Sherwood Forest Trust and the Environment Agency to see a new wetland being developed on an area of the TEC land bordering the river Maun. The tract is to be planted to encourage wildlife, and the flora and fauna associated with this kind of habitat. The Environment Agency will develop the site and the Sherwood Forest Trust take responsibility for the future care and maintenance. 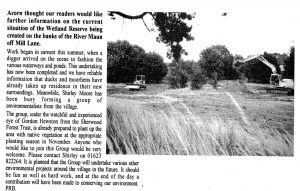 Edwinstowe Conservation Group was set up after a public meeting in November 1999.The Acorn Newspaper donated £100 to start the Group. 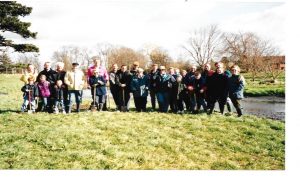 Twenty two members attended the first meeting appointing Shirley Moore Chairman, Anne Jones Secretary, Janice Hull Treasurer. The Aims and Objectives of the group, to conserve and protect the environment in Edwinstowe, to restore, improve and enhance the traditional landscapes and habitats in the parish, was agreed. The group’s first project with the help of the Sherwood Forest Trust was to re-instate the wetland area alongside the river Maun. 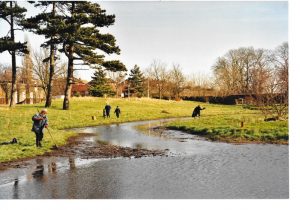 Gordon Hewson project manager explained that the planting needed to be completed in early spring 2000.  The plants will be provided by an Environment Agency. Working in teams the group replanted Hawthorne hedging, planted Sedges, Meadowsweet, Flag, Iris and Marsh Marigold Fixed bird boxes and planted Willow and Black Poplar. A number of field sycamore trees edging the site near the roadside were cut back to allow the wetland to be viewed from the Bridge.

A Wildlife corridor along the back of the houses on 6th Avenue was cleared of rubbish and planted with a total of 170 plants. A yearly Management Plan was drawn up, the meadow should be cut twice a year in April/May and August/September it is important to remove cuttings in the first two years. The site should be checked for nesting birds prior to cutting and nesting areas avoided. A broad margin should also be left adjacent to the river/pond bank where nest are most likely to be found. In 2002 the site was re-dredged in February and the dredged silt was spread over a large area this was then rotavated and seeded with lowland meadow mix at the beginning of May. For a number of years the site was attended by the conservation group removing Himalayan balsam and hemlock and the Sherwood Forest Trust continued to cut the meadow. A survey of the site revealed a wide variety of wild flowers, plus a healthy duck population the wetland could be viewed from the bridge protecting the nesting birds. 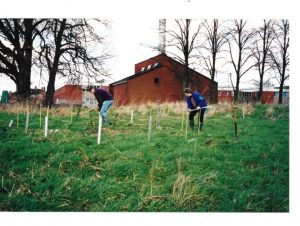 Sadly, over the past years the site has not been maintained by the Environment Agency and the Sherwood Forest Trust. The trees that were planted as part of the Maun River Project are now well established although a large Yew tree has been planted amongst the native trees spoiling the effect, many of the wild flowers that were identified years ago have now disappeared and a number of garden bulbs and plants have been planted on the site. 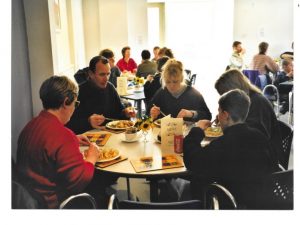 Members taking a break in the TEC canteen