7When Royalty stopped off at Edwinstowe – Princess Alice 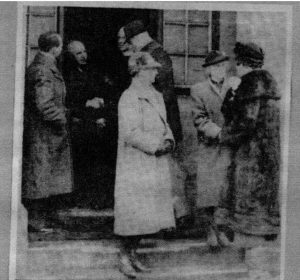 People all over the world were saddened to her of the death of the well-loved Princess Alice, Countess of Athlone, and this picture may bring back special memories for Edwinstowe residents who welcomed the Princess to Edwinstowe during WW11.

Taken in the early 1940s, the princess was visiting a canteen set up for both American and British soldiers who were stationed in Edwinstowe. Thursday 25 January 1940

The Royal party was being welcomed by the late Ernest Reddish, a member of the Royal Observer Corps, who helped organise the canteen. Also pictured in the photograph is Her Grace, the late Duchess of Portland.

The picture has been loaned by Mr. Reddish’s daughter, Mrs. E. Little, of Langwith Junction.