Ashgrove House was a Queen Anne/Regency House on West lane (on what was then called Dog Kennel Lane or Black Lane West.)

Also, in the mid 1800s Ashgrove House on West Lane, which later became the vicarage, was a Young Ladies school. Newspaper report,

“ASHGROVE HOUSE, EDWINSTOWE. MRS. and Miss DRACOTT beg to return their sincere thanks for the share of patronage they have received in their Establishment for young Ladies, and also to inform their friends and the public that they will resume their scholastic duties on Tuesday, July 27th.—References are kindly permitted to the Rev. John Gordon, Vicar of Edwinstowe, the Rev R. Pocklington, Vicar of Walesby, the Rev. J. Peatfield, West Bridgeford, and to R. C. Ward, Esq., Ollerton. Edwinstowe, July 10th”

In the 1930’s Dr Rogerson had his Surgery at the house. Then in 1947 Dr Grey moved into the Vicarage on Mansfield Road having exchanged Ashgrove House with Rev. Basil Evans. 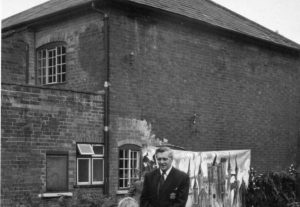 It was demolished in the 1960’s to make way for the new vicarage.

Do you remember Ashgrove House?  We would love additional photo. Can you help?