Between 1891 and 1932, the Jug and Glass owned by the Worksop Brewery was run by the Watkin and Woodhead families. They were not particularly imaginative in naming their children and the name Edith passed from one generation to the next and between cousins. The two early photographs have three different Ediths in them.

Charles Watkin, born in 1839 married Ann Mitchell in 1863 in Edwinstowe. They had three children while in Edwinstowe their fourth child, Edith (Ann), was born in Chester. Charles had moved to Chester to work on the Alfred Waterhouse rebuild of Eaton Hall, for the Duke of Westminster. On completion, part of the family stayed in Chester, Charles and Ann with their youngest daughter Edith (Ann) returned to Edwinstowe, becoming proprietors of the Jug and Glass in 1891.

The first photograph has Charles in bowler by the front window, his daughter Edith (Ann) in her teens to the left of the front door, a younger cousin Edith from Chester is in the pinafore dress to the right. Behind them is cousin Edith’s mother and maid. Looking from the side door is Ann, and at the top of the yard a groom is preparing a carriage.

Charles died in 1896 aged 56, Ann became the proprietor and saw the refurbishment and rebuild at the turn of the century. Her daughter Edith (Ann) married Herbert Woodhead in 1906, and had six children. Their eldest, a girl they named Edith (Mary). 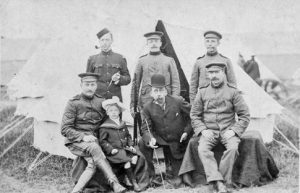 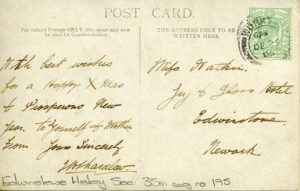 Post card to Miss Watkins at the Jug and Glass 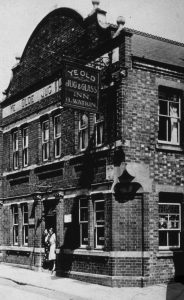 This photograph of the refurbished Jug and Glass circa 1920s, has Edith (Ann) Woodhead and her daughter Edith (Mary) Woodhead stood in the doorway. Charles widow Ann lived at the Jug and Glass until her death aged 92 in 1932. On her death, Herbert and Edith (Ann), bought 1 High street and ran a chocolate/sweet shop, inheriting property in Church street, when Ernest, Herbert’s elder brother died in 1941.

Flying Officer Philip Woodhead, youngest son of Mr and Mrs Woodhead, High Street, Edwinstowe received the Distinguished Flying Medal from HM the King at a recent investiture at Buckingham Palace. His father and mother were present at the ceremony. F.O Woodhead (at that time Flight Sergeant) participated in attacks on Cologne, Karlsruhe, Frankfurt, Bremen, Berlin, Brest and Rotterdam. He is now 22 years of age.

A native of Edwinstowe, he received his early education at Edwinstowe Church School, and afterwards went to the Brunt’s School, Mansfield. On leaving school he took up an appointment in his uncle’s office in the Coal Exchange, Chester, and from there joined the RAFVR. in June 1940.

Mr and Mrs Woodhead, who for many years were the licensees of the “Jug and Glass” at Edwinstowe, have two other sons in the forces. PO. Charles Woodhead, RAF, is serving in Egypt and Cpl. Robert Woodhead is now an instructor after serving for over two years with the Royal Corps of Signals in Iceland. They also have three daughters, their second daughter’s husband, Flight-Lieut. Maurice Bradbury, being in the RAF Meteorological department. Mr Herbert Woodhead served in the Royal Flying Corps (afterwards RAF) in the last war.

The Woodhead family still have strong links with the village.