The Firework Factory – a Near Neighbour 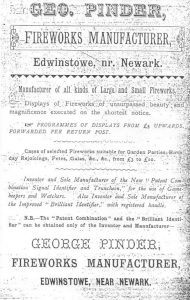 On Rufford Road, then known as Lidgett, the census of 1891 records a Fireworks Factory with 5 working pyrotechnists. Obviously, there was a serious fire hazard here.

The factory was owned by Messrs F. Tudsbury and Co. The Nottinghamshire Guardian newspaper reports that the firm put on firework displays at various events, e.g. the Sunday School Centenary at Sutton-in-Ashfield, between 1876 and 1880. 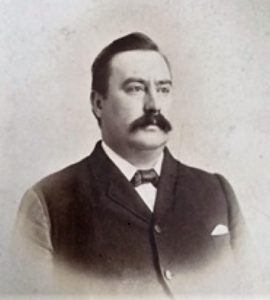 By July, 1886 the paper reports that Mr. George Pinder conducted a firework display at the Nottinghamshire Agricultural Show.

Mr. Pinder was at Welbeck Abbey conducting experiments with a new kind of bomb, patented by him, for use at night by gamekeepers for illumination of the scene in cases of poaching. During the experiment there was an explosion and Mr. Pinder’s right hand was blown off. The article continues that he was taken to the Abbey for medical attention. 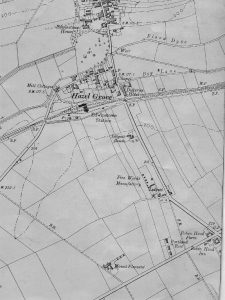 Work did not always go smoothly:

In a trade directory of 1885, it is recorded that Pinder, Geo. jun. of Lidgett is a wine, spirit and porter merchant, a far less hazardous occupation, providing one does not carry out too much quality control testing of the merchandise.