John Wright-Barker was born in Horton near Bradford in 1864.  His family were weavers, and although he started off in the weaving industry, he pursued a career as an artist. He lived in Bradford until 1885 when he moved to Edwinstowe, and according to the 1891 census he was lodging in a property in Town Street (now High Street).

In 1891 he made his debut at the Royal Academy continuing to exhibit there until 1935. He was elected a member of the Royal Society of British Artists (RBA) in 1896.   He also exhibited at the Walker Art Gallery, Liverpool, Nottingham Art Gallery and other provincial galleries.

On 30th September 1905, the St Andrews Citizen newspaper reported that during King Edward VII’s stay at Rufford Abbey Mr Wright Barker the well-known animal painter was commissioned to paint a life size picture of his Majesty’s favourite dog, Ceaser, a wire fox terrier, which accompanied the King on all his visits. When the King died in 1912 Caesar was included in the King’s funeral procession. 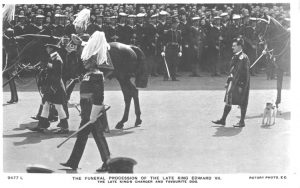 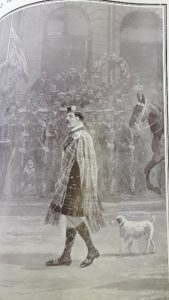 A  photo of Caesar at the funeral from the newspapers at that time.

Mr Wright Barker married Ellen Mary Alcock in 1892 and they had three daughters, one of whom was Kathleen Frances (1901-1969) who also became an artist, illustrator and writer of books about animals. By 1901 he was living in Ollerton having achieved considerable financial success. In later life he also became a picture dealer. He died in Knaresborough on 10 March, 1941.

The following information courtesy of Fitzhugh’s.

“Barker became a member of the Royal Society of British Artists in 1896, exhibiting 28 paintings over the course of his career. He exhibited 22 paintings at the Royal Academy between 1891 and 1938, including In Forest’s Depths Unseen (1891), My Children and their Pets (1904), and The Day Before the Fair. Barker also exhibited at the Royal Society of Artists in Birmingham, the Royal Scottish Academy, Nottingham Museum and Art Gallery, Royal Academy, Walker Gallery and Manchester City Art Gallery, among others. In addition to his hunting and animal paintings, Barker painted the occasional portrait, such as Harrison Benn, Esq., and Daughters (1901), and the pre-Raphaelite-styled Circe (1889).”