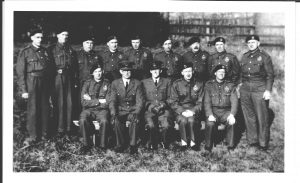 Memories of Edwinstowe in the Thirties and Forties

Ruth Naish, writing from Sheffield, memories which she shares with her twin brother, James;

When the war started, in 1939, mother drove an ambulance and was the Gap Billeting Officer for Edwinstowe and preparations were made to receive evacuees from Sheffield.  Ruth remembers riding her bicycle to the Council School for the first time and ‘helping’ to prepare a welcome packet for them which included chocolate biscuits, soon to become a rationed luxury.  The evacuees from Sheffield soon went home but another wave came from Littlehampton who also went home quickly.  There were several big efforts to raise money for the war effort and Edwinstowe competed with Ollerton to raise the most money.  Edwinstowe had a War Weapons Week and Ruth remembers going with the whole school to the cricket ground on the forest and singing four national songs representing England, Scotland, Wales and Northern Ireland.

Edwinstowe was surrounded by army camps during the war and Ruth remembers going with her father to deliver milk, eggs and potatoes to the camps at Rufford and Carburton.  We both delivered milk in cans twice a day before and after school, mostly to addresses on East Lane and High Street and to the canteen for the troops on the Forest.  We drove the farm tractor (the first tractor in the village) at harvest time, and Ruth remembers working late in the field called ‘Sarts’ (a corruption of the medieval word ‘assart’ meaning a clearing in the forest) on the way to Budby when a German Dornier plane flew very low over a lone tree.  Fortunately, he flew on but she always thinks of it when she passes along the road.

Dad was in the Royal Observer Corps and David remembers being parked at the Observer Corps hut on Ollerton Road near to the Ollerton roundabout while mother rushed off to drive her ambulance.