Lifetime resident Shirley Moore first mooted the idea of a Parish Map in 1992, and went on to form a committee which included Frank Dove, Elinor Crocker, Margaret Woodhead, and Peter Annable: 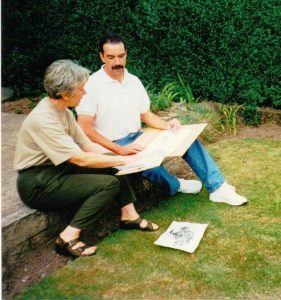 The interest of the nimble fingered amongst the residents was aroused by the enthusiasm of the committee and the Map was eagerly commenced.

The first major obstacle was a lack of funds but this was overcome when the Nottinghamshire Rural Community Council came forward with a substantial grant. After many hours, weeks and months culminating in four years of hard industrious work, and it has to be said, despair that the project would ever be finished, the Map was at last completed. 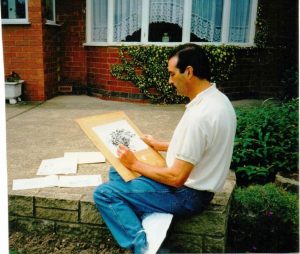 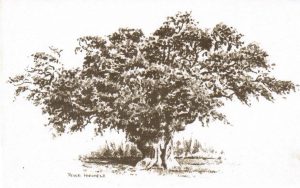 The 9 by 6 feet blank calico has been transformed into a rich and colourful tapestry of life in Edwinstowe during the 1990’s. It will prove a talking point for present residents and a visual aid enabling people of future generations to study our village of today.

The Map hung in its permanent position on the West Wall of St Mary’s Church can be viewed by many worshipers and visitors to our beautiful twelfth century church. 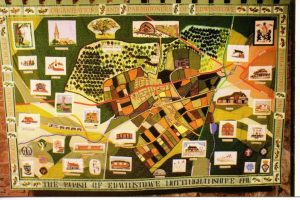 The sketches were then transferred onto material. 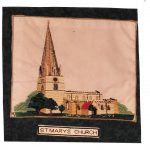 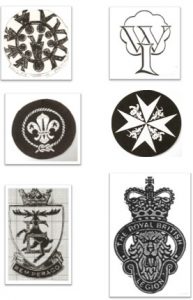 Badges from some of the village organizations were included:

Frank Dove and Margaret Woodhead – the first draft on paper.

Transferred and painted onto Ozaloft.

This looks rather interesting.

Edwinstowe on the map.

The map is now in place on the west wall in St. Mary’s Church Edwinstowe

Edwinstowe in the Newspapers

The Team of Workers