A game that resembled football was developed in England in the 12th century.  It was played on meadows and roads in England. The game was a very rough game and involved kicking and punching the ball with the fist.  This was one of the reasons why it was forbidden for several centuries.

The world’s oldest football clubs were founded in England in 1789. In 1871, the FA Cup was founded. The first international match took place in November 1872 when England travelled to Glasgow to play Scotland.

Many churches started football clubs in the late 1800s, including Everton, Manchester City, Southampton and Celtic in Scotland.

One of Edwinstowe’s first official football matches was recorded in the Mansfield Reporter, 3rd November 1893, when they played Tuxford and won. It was part of Edwinstowe’s Feast Week. 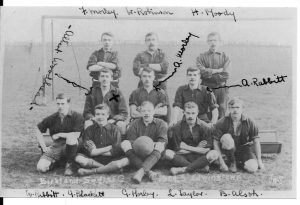 Walter Rabbitt, a private in the 11th Battalion, Sherwood Foresters died 8.10.1918 and is buried in the Doingt Cemetery, Somme, France 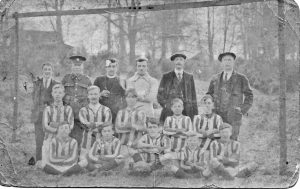 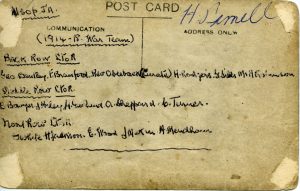 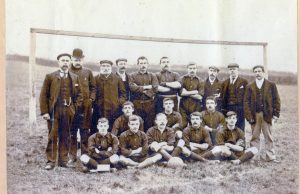 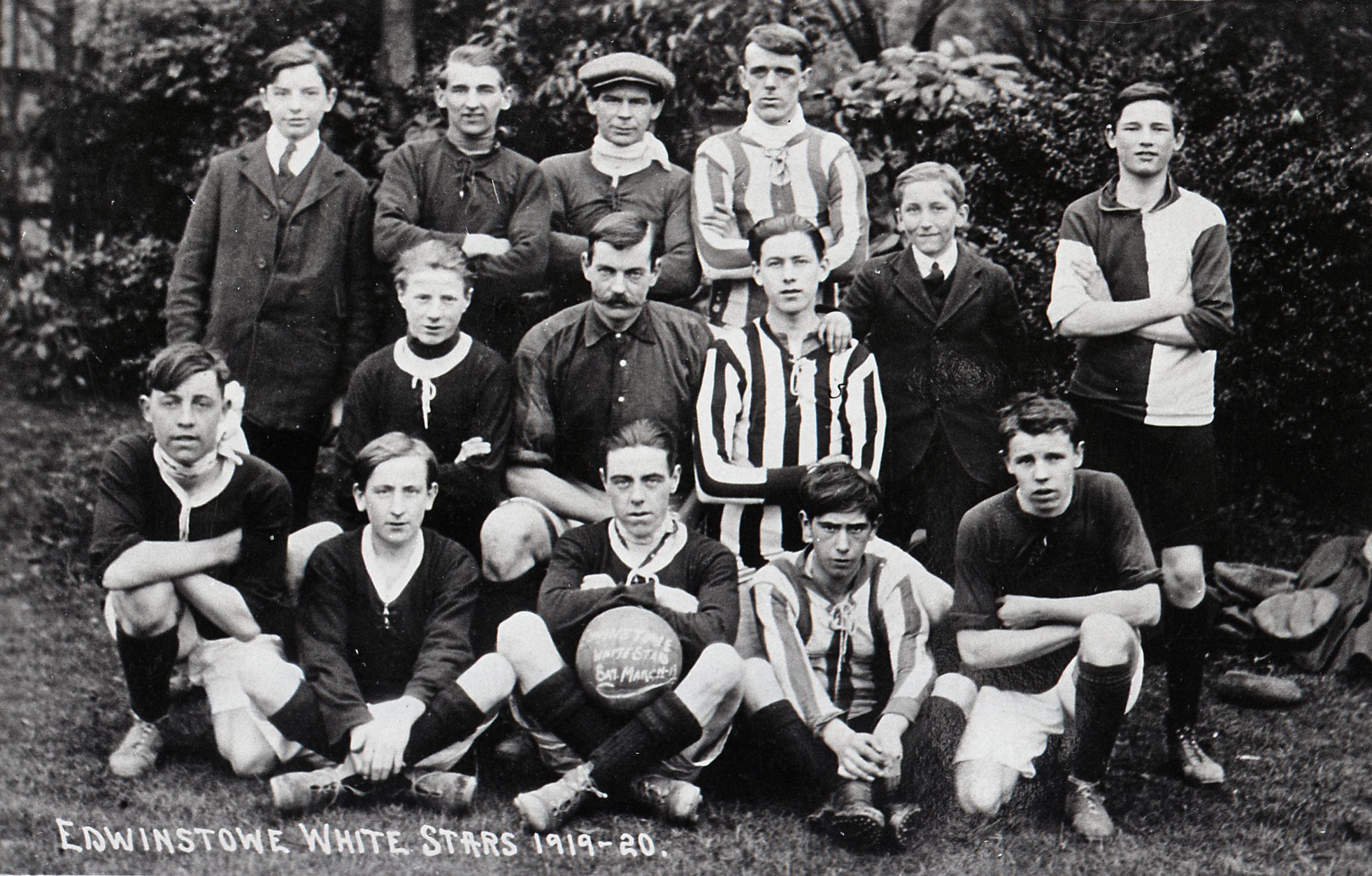 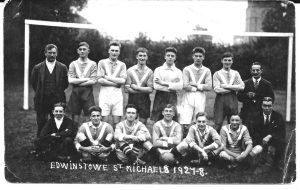 On 6th December, 1927 a group of pit boys, including pony drivers, and haulage boys employed by the Bolsover Colliery Company visited Windsor to play a football match with a team of public-school boys.  Major Moncur who controlled the welfare work for the Bolsover Colliery Co, at Edwinstowe Hall, selected boys from each of the company’s pits to make up an eleven to meet the Imperial Services College XI, Windsor.  In goal was the Headmaster, Mr E. G. A. Beckwith.  The boys were accommodated in one of the college houses.  In the photo the players are seen wearing the kit from Edwinstowe’s St Michael’s football team. 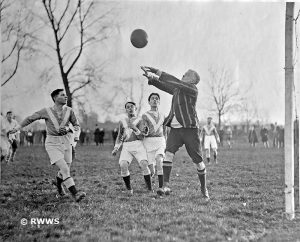 According to newspaper reports the boys were shown around Windsor Castle, followed by a visit to the Tower of London and other places of interest.

PIT-BOYS IN LONDON Tour of the Sights After Their Football Victory.  The eleven Pit-boys who defeated the school eleven of the Imperial Service College by 13 goals to 3 in a football match at Windsor on Tuesday arrived at Paddington yesterday morning to be shown the sights of London. Drawn from collieries around Mansfield, Nottinghamshire the hosts of the Bolsover Colliery Co.  none of the boys has been in the Metropolis before. “Where on earth are we?” exclaimed two or three of the boys. When they reached Trafalgar Square they became involved in the gyratory system of traffic. After lunch the boys were taken to the railway station, and left for home —tired. But not too tired to discuss excitedly their lightning tour of London. Published: Thursday 08 December 1927

WHAT PIT-LADS SAW IN LONDON  Schneider Cup Seaplane Attracts Them. A motor-coach load of laughing, happy lads toured the sights of London yesterday. They were the eleven pit-boys drawn from collieries around Nottinghamshire. They went up by train from Windsor to London. None of the boys has been in London before, and they almost ran from the  train at Paddington to the charabanc which was waiting for them. One of their ambitions has been to see the seaplane on which, the Schneider Trophy was won by Vice Flight-Lieutenant Webster and they were just in time to watch it being dismantled on Horse Guards Parade. What the boys most wanted to see was not Westminster Abbey, the Tower, the traffic; but the, mechanism of the Tower Bridge also: The Savoy Hotel. Latter- reminiscent of returning home they made friends with a Beefeater and asked him whether he had pudding with him. In Whitehall  they saw the guards “Must get awfully tired of being looked at so much,” remarked one .  Thursday 08 December 1927

Below the seaplane they went to see. 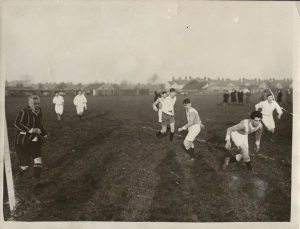 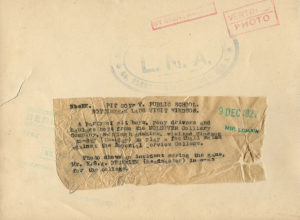 A clip of the match from Pathe News https://www.youtube.com/watch?v=JLselwBIK5Q 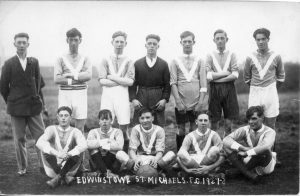 Thoresby Colliery Football Club was formed in the 1930s and in the early years was played on farmer Herbert’s field, before moving to the new sports ground on Fourth Avenue provided by the Bolsover Colliery Company.

Over the years several of Thoresby’s players have moved into the professional game. One such player Joby Dean left Thoresby to join Queens Park Rangers and as compensation the club received a Blue & White playing strip. (The team’s colours for many years) 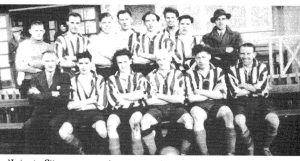 The football team was selected by Bill Smith to play a challenge match versus Edwinstowe United, on the Thoresby Ground Christmas morning. This tradition, Thoresby Colliery V Edwinstowe United continued for many years. 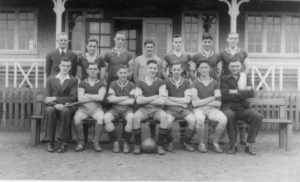 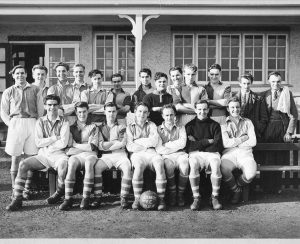 Walter Hass (Goal Keeper) featured on the front row was a Prisoner of War from Germany. He married a girl from Tuxford, and in 1953 they lived in Egmanton before setting up home in Wiesbarden West Germany. Ron Mason kept in contact with Walter until Walter’s death aged 89 in 2014. In the 1952/53 season the team won the Nottinghamshire Junior Cup despite being drawn away from home in every round. 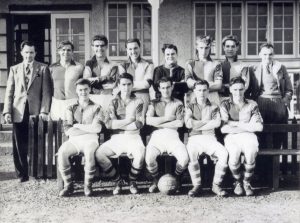 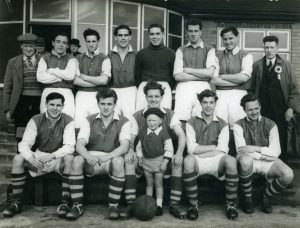 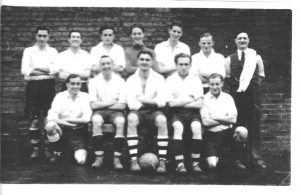 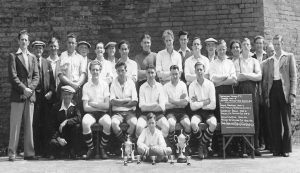 The village already had a Team of Senior young men Called Edwinstowe United who played on farmer Herbert’s Field, at the rear of the Old Vicarage, on Mansfield Road. Eric Wardle and Reg Burridge formed a team of younger village lads.

The Edwinstowe Colts F.C, originally played on a pitch adjacent to the Cricket ground on the edge of the forest. Eric would mark out the pitch with sawdust from Bob Woodhead’s workshop.

Shirts and socks were obtained through a scheme run by the local Co-op called “The Twenty Week Club) and were a copy of the Arsenal kit at the time.

Football on the Forest Corner 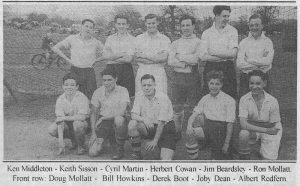 On September 20th 1958, Rolls Royce Engineer, William E. Howkins (Bill) was killed along with three other crew members on a test flight of the first proto type Avro Vulcan strategic bomber. The test flight from the Rolls Royce Flight Test Establishment RAF Hucknall diverted to make a schedule fly-past for an air show being held at RAF Syerstone. Mike Gratton recalls playing alongside Ron on a ground beside the Cricket Ground on the Forest Corner which was levelled and prepared by Italian prisoners of war. Such was the interest in the village at the time as many as two hundred spectators would turn up to watch.

Ron & Mike attended the Council School from 1938 to 1947, a period that embraced the war years. They and others played on the school field until long after twilight, there being no T.V to lure them along from the game which was an important part of their lives. They kept in good condition by wheeling miner’s domestic coal from the roadside to the coalhouse for a half-crown tip.

Ron and Mike played for the Dukeries X1 (the area representative team) Ron became a painter and Mike worked at Thoresby Colliery.

There being no youth team in Edwinstowe at the time they played for Woodhouse Amateurs. Later, while playing for Bilsthorpe Boys, Ron was spotted by a Leeds United scout. Ron eventually signed professional forms in 1950 aged only 18, and he became friendly with the Legendary John Charles, captain of Leeds and Wales, and Ron was best man at his wedding. Ron played for the England Youth X1 and was captain in one game at White Hart Lane.

His career was interrupted by National Service, when he returned, he joined York City. After three years with Bradford City, he returned to painting and decorating. He still played non-league football and later, he became player manager with Bridlington, Trinity. He was honoured by being elected as Chairman of Leeds United Ex-players Association. One of his proudest memories while playing with Leeds was playing against the illustrious Stanley Mathews.

Joby Dean, of Henton Road, was a professional footballer. Football seems to have been in his blood, for his dad, Job, after whom Joby was named, was a fair player in his youth. Also,  Joby’s older brother, Frank, was an accomplished centre forward.

After representing Edwinstowe School and the Dukeries School XI, Joby, at the age of 14, was a member of the successful Clipstone Youth team, all under 16, who won the Notts. F.A. Junior Shield. He then played for Thoresby Colliery in the Mansfield League and, later, in the Worksop League.

Joby, at 18, impressed a Queen’s Park Rangers scout and was invited for a trial.  He played a nostalgic game for Thoresby Colliery and was invited, by a watching Sheffield Wednesday scout, to go to Hillsborough, but he was loyal to Q.P.R. He became a member of their first team squad, then playing in the Third Division South. He was called up for National Service, upon his demob, Joby carried on playing with Q.P.R. for a total of six seasons. 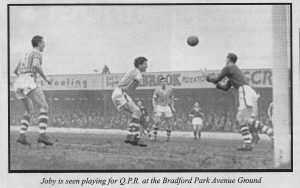 lucrative contract. He stayed with Bradford for four-and-a-half years In 1966, the Bradford manager insisted that all his playing staff should live in Bradford and, in his family’s interests, Joby decided to remain in the area where he had been brought up and, although he received an offer from Doncaster Rovers, he left the professional scene and joined Sutton Town, in the Midland League.