The history of the Allotments. 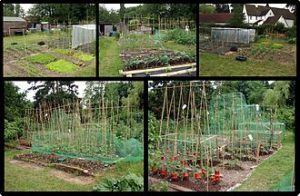 Allotment gardening in Edwinstowe goes back to the late 1800s. 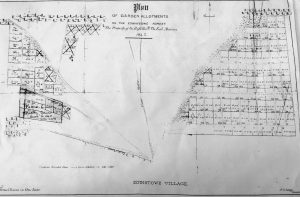 Garden Allotments on the Edwinstowe Forest 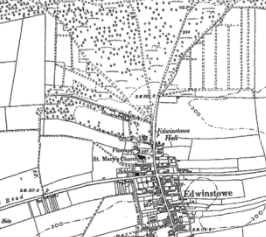 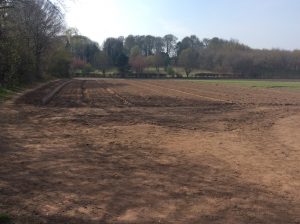 The area near the cemetery where the allotments used to be.

The history of Edwinstowe Allotment and Leisure Gardeners’ Association

Edwinstowe Allotment and Leisure Gardeners Association began after the WW1 and has a long and proud history of serving its members’ needs. April 15th, 1918 saw the establishment of the Ollerton Road Allotments to serve the needs of allowing the men of the village to feed their families. 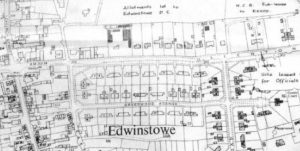 Allotments near the Dukeries Hotel 1920’s 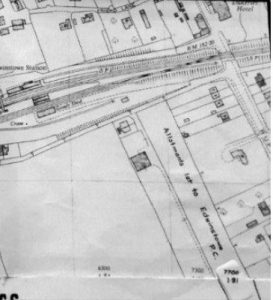 Allotments near the station behind Rufford Road 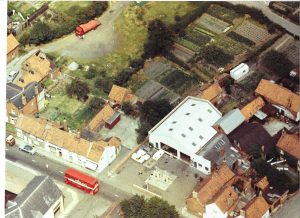 There are still copies of the original handwritten agreement in which the owners (Thoresby Estates) gave all management and maintenance responsibilities and costs to the Association whilst making the Parish Council the one responsible for collecting and paying the rent.

It is reasonable to question why the Parish Council was made the tenant when the Edwinstowe Allotment Association were totally responsible for the running and upkeep. However, as few councils of that time owned rural land as this was still in the hands of the landed gentry, allowing the tenancy to fall into the hands of the local council allowed them to fulfil their statutory duty to provide allotments where requested.

Part of the history of allotment gardening in Edwinstowe shows that the The Edwinstowe Allotment Association has taken the duty of managing and maintaining the Ollerton Road allotments site very seriously from 1918 to 2014. In 1919, the Mansfield Reporter reports how successful the second Allotment  Association Show was:

“EDWINSTOWE VEGETABLE SHOW. The second annual show, under the auspices of the Edwinstowe Allotment and Garden Holders’ Association, took place on Saturday last, and favoured by glorious weather, the event proved a great success, both financially and otherwise. The number of entries constituted a record„ and the vegetables exhibited in the various classes were of excellent quality. There was also a good show of tubers, but these unfortunately were not quite, up to the average, showing as they did some scabby effects, largely attributable, no doubt, to the long spell of dry weather. The show took place at the large room at the Jug and Glass, and the secretary, Mr. W. Raines, is to be congratulated upon the success achieved.”

Even during the decline of popularity the plot holders worked together to ensure the future of the site was protected and kept to the standards demanded by the owners. Many of the plot holders have had their plots for decades, sometimes paying for and cultivating several plots before the revival of allotment gardening in order to prevent the site being closed. We have the national record holder for the longest unbroken tenancy in the country. He was given an award by NSALG (National Society of Allotment Holders and Leisure Gardeners). 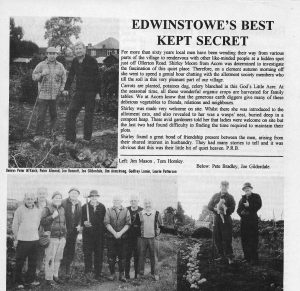 The Christmas hampers of fresh vegetables delivered over the years, by the Parish Council workers, to many of our elderly citizens were provided by the Edwinstowe Allotment Association free of charge and harvested specifically for this purpose. They also gave fresh vegetables for the Harvest Festival Services when fresh food was acceptable and surplus crops also were donated to Framework the charity helping homeless people.

The sale of fresh produce on the High Street in recent years was to raise funds to begin the upgrading of the site which was beginning to look outdated and in need of some care and attention. The Committee of the time worked hard to find best value for money in repairing the access road, which became inaccessible in bad weather. With the help of a local farm workers, for little other than out of pocket expenses, they were able to lay over a hundred tons of shale over the period of a couple of years. It was inspiring to watch these men in their 70s and 80s laying 80 tons in one day. It was evidence of the mind-set of a different time when manual labour was normal for the men of the village.

Double Digger, kindly submitted this article to the Acorn Newspaper

When I became an allotment holder, my prime purpose was to grow vegetables to feed our family. Now, some twenty years later, I see that other benefits arise.

An allotment, like nature, has its own seasons but, within those seasons, the work involved is condensed into short periods of activity.

Spring is a time of great activity with sowing seed, planting, and preparation, all requiring time, especially as there are fixed periods when seed needs to be sown.

Once this is achieved there follows a period when you look for seed germinating and plants to have taken. At this time, it is important to keep weeds controlled so that they do not crowd the emerging seedlings.

Throughout summer and autumn there is the pleasure of gathering in the produce and then follows the winter tasks of digging over the allotment in preparation for spring.

With an allotment you need to be patient and understanding. Because you cannot sow and plant everything simultaneously, you have to plan your programme and, in doing so, take into account the vagaries of our weather. Planning and patience are qualities needed if you are to achieve maximum output from your plot.

There is also the social aspect of tending an allotment; a group of men and women with similar interests, combining to work together, help each other, tender advice and generally take an interest in what is happening on neighbouring plots. There is a continuous exchange of views and each year you add to your fund of knowledge and strengthen the friendship that grows naturally.

In this age in which we live everyone needs space to himself, a time to think and contemplate where better than on an allotment, undisturbed by the distractions of modern life. You can be alone on your plot and the only distraction you may encounter is a robin or blackbird watching you turn the sod over.

Should you be a person who likes solving problems then an allotment is essential; there are always problems to deal with, some old, some new, but to most there is an answer. Aphids, blight, etc are constantly with us, as are mice, moles, rabbits and pigeons. Experience helps to counter these problems either by prevention or control.

Another aspect to consider is that an allotment requires some physical effort, which is a good way of keeping reasonably fit. Why pay to go to a health club when you can exercise for free and at the same time benefit from what you grow. For those who have problems doing this it is possible to use mechanical means to assist in the work involved.

With an allotment you choose to grow what you want to eat, whereas if you purchase from a store you have to take what’s on offer. However good stores are they cannot present their produce as freshly as you can from your allotment. Not only is your produce freshly picked but it tastes so much better. More importantly you know exactly what it’s been sprayed with, which does not apply to store – bought produce.

As I write this article, I have been reflecting on the year past, but I now need to look forward and plan my winter work schedule.

I try to complete my winter digging before the bad weather of January and February arrives. This then gives me a period of time in which I can review the past and plan the future. 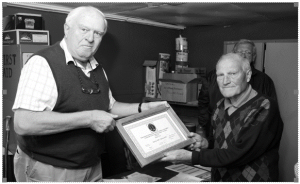 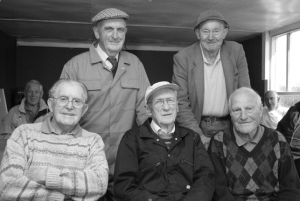 Do you recall Gunga Din? He was the loyal watercarrier in Kipling’s poem named after him. For those who do, a visit to the allotments this summer would have seen many Gunga Din lookalikes. Brown-skinned men, wearing shorts, were as busy as bees as they tried to emulate Gunga. One morning I counted more lookalikes than those of Saddam in Iraq.

This leads to another question, namely: has the summer of 2003 been the hottest since 1947? On the allotments the consensus is that in 1976 the weather was hotter and drier and high pressure was more dominant. Do you remember that, in 1976, the Government appointed a Minister of Drought? If you do, can you remember his name? I’ve heard that Tony Blair may follow suit to take the heat out of Hutton. Pity he (Hutton) is not available for England.

Joking aside, 2003 has already seen further improvement to the site. The members (we are democratic) decided that it was time to have a general clean-up and dispose of the rubbish accumulated over many years – similar to moving to a new house, you may say! What was expected to be a fairly low-key affair turned out to be beyond our wildest expectations. Initial thoughts were that two or three skips would suffice – some hope! By the time members had surveyed their plots and sorted out disposable rubbish, the pile occupied a full allotment. One wag said it looked like the contents of a Sheffield scrapyard prior to being put in a furnace! It was rumoured that several local car boot regulars had had a look round but had gone away empty-handed. As I said, it was rubbish, and someone noticed a Tate and Lyle gallon drum of syrup, which must have been pre-war – 1939, not Boer!

As usual, when we have a problem, members make a supreme effort and the lot was cleared, albeit at a cost of several hundred pounds out of the allotment funds.

We don’t have many visitors, human that is, but, on one occasion, one was heard saying that he had never before seen sugar cane grown in England. He was, of course, mistaking sweet corn for sugar cane. This year the amount of sweet corn grown has increased significantly. This carries on the tradition of members being prepared to experiment with different produce. I remember, at one time, tall peas were a favourite but that stopped when the stepladder went missing! One member has grown some exotic Caribbean plants, this time with great success – they reached eight feet in height! I cannot tell you the name because I can neither pronounce it nor spell it.

Obviously, the weather has had an adverse effect on much of the produce grown, and yields are in most cases down. However, one member recently told me that he was getting a stone (fourteen pounds for the under-30’s) of potatoes from two roots but complained that last year he got three times that amount! No, he is not a fisherman but may suffer from amnesia!

Nevertheless, we continue to be in good heart, cheerful, optimistic, and looking forward to getting the wellies on again. Life on site is interesting and therapeutic and certainly beats taking the tablets! There is so much pleasure in sharing the company of so many nice, friendly, helpful and considerate people

An amusing article from Rayne Phaul for the Acorn Newspaper 2003 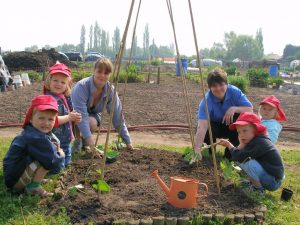