The lock-up, next to the former Constable’s cottage on High Street opposite the Jug and Glass in Edwinstowe, was demolished many years ago, but the prisoners’ chains can be seen on the remaining wall of the building. They form part of the Village Trail and are situated within the designated Conservation Area of the village. The Lock-up was in use in the 1920s as recorded in this newspaper article:

‘A lively scene on the main road in the Dukeries was described at the Worksop Police Court on Wednesday, when Wilfred Hall, miner, of Rock Cottage. Shirebrook. was summoned for being drunk in charge of a horse and trap, and three other Shirebrook miners, Ernest Swindell. 19. York-road James Kirk, and Tom Wallace. both of Field-drier, were summoned for being drunk and disorderly. Albert Sissons Smedley, inspector for nuisances under the Southwell Rural District Council, said the men were in a trap at Edwinstowe at 9.45 pm. on Mar 23rd. The trap was thrown over, the men being on the ground, and the pony dragged it for 20 yards upon one wheel. P.C. Randall said defendants were helplessly drunk, and he placed them in the lock-up. Hall was- fined 305., and the other defendants each.’

The walls and chains are now protected. NSDC planning. 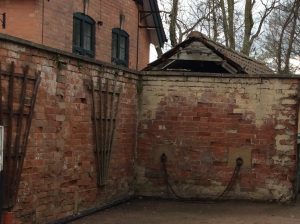 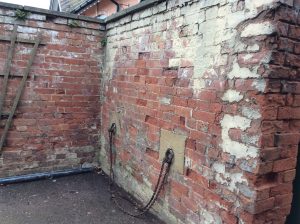 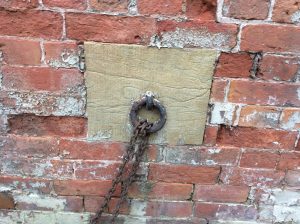