Cricket has been played in Edwinstowe for more than 200 years. Many of these matches were recorded in the local newspapers throughout the 1800s. The reports show that they were very well supported by villagers and Gentlemen alike.

Match results, from the early 1800s, were usually reported in the Nottingham Review and General Advertiser, such as in July 1844 where the match was played on a Monday, in the Manor Park, Worksop, Edwinstowe played Worksop who won.

Results were regularly reported during the Cricket Season.

At times, cricket was a major event in the calendar such as on Friday 1st July 1866,

‘Rufford v. Edwinstowe — A match was played on the frontage of the Abbey on Friday last between the Rufford Abbey and Edwinstowe clubs, which terminated favour of the latter. There were many visitors to look on, amongst whom was Jackson, who looked remarkably well after his trip to the Antipodes. The day was fine, and the scenery on every hand beautiful: on the distant slope of the hill in the park the tents and copes where the pheasants are being reared had a pleasing effect. At the conclusion of the match the players and friends sat down an excellent dinner, which the noble patron of English sports, H. Savile, Esq., had ordered. There was a good supply of nut-brown ale from the monkish cellars of the Abbey.’

On Friday, on the Edwinstowe Cricket Ground. 200 children were regaled with a dinner of plum pudding, roast beef, desert and in the evening with a first-rate tea and entertainment. They were the children attending the Church Sunday Schools of Edwinstowe, Ollerton, Clipstone, Budby, and Carburton. Earl Manvers had lent a most beautiful tent for the occasion, and both he and his noble countess take deep interest in such matters. The affair, we understand, was got in by subscription by the gentry of the parish, to which his lordship liberally subscribed. The scholars will long remember the treat, as in the sports they much enjoyed themselves.

Members of the Cricket club in 1880

Turn the pages of the booklet to see photographs and memories of cricket played on the Forest Corner. 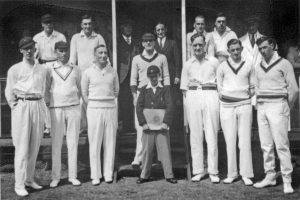 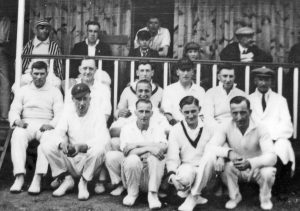 Opening of New Cricket Pavilion May 1933 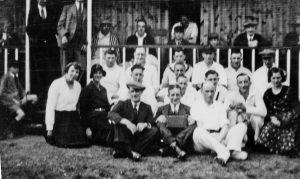 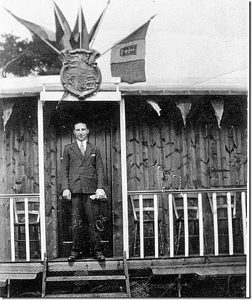 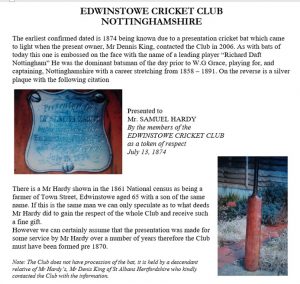