The Women’s Institute Movement which originated in Canada in l897, was set up in Britain in 1915 to revitalise rural communities and encourage women to become more involved in producing food during the First World War.  Since then the organisation’s aims have broadened and the WI plays a unique role in providing women with educational opportunities and the chance to build new skills, to take part in a wide variety of activities and to campaign on issues that matter to them and their communities. 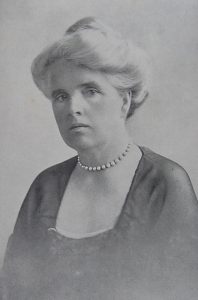 The first WI meeting in Nottinghamshire was held at Southwell in May 1917 and addressed by Mrs. Madge Watt who, while staying with a relative, thought it an ideal place for a WI.

More information is available about the historical events that took place during the WI’s formative years in Britain, and “A History of the WI’s in Nottinghamshire” by logging on to the following websites.

The WI is a non-political organisation, but it does discuss (for example) subjects concerned with the welfare of our nation, and its National Federation frequently puts forward resolutions for    consideration by the government of the day.

The following are some of the resolutions passed by Nottinghamshire Federation of Women’s Institutes:

“7th July, 1948.   This meeting deplores the fact that ammunition dumps, to the danger of children, are still spread over the countryside, and urges the War Office to take immediate steps to have these dumps removed.  East Leak and Edwinstowe.”

“12th July, 1958. That the GPO make some arrangement for the paying of Old Age Pensions in villages where no Post Office exists or where only limited Postal Services are available.  Ollerton and Edwinstowe.”

“26th March, 1963.  That this meeting asks the Ministry of Housing and Local Government to encourage and assist the planting of trees on disused colliery tips, wherever this is possible and appropriate.  Thoresby and Edwinstowe.”

According to the Mansfield Reporter dated 7th November, 1919 :

“By the invitation of Miss Squires, a meeting was held at the vicarage on Wednesday last to discuss the advisability of starting a branch of the National Federation of Women’s Institutes in Edwinstowe formed all over the country, including several in Nottinghamshire, and after reading the literature and accounts of the work done by these institutes, it was unanimously decided to invite a speaker from the Notts. Branch of the federation to address a public meeting of women in Edwinstowe on the subject.  Lady Sibell Pierrepont wrote to express her regret that she was unable to attend the meeting, and her willingness to support the institute.  It was decided to form a branch in the village.”

These were the early days of the Group, and a report in the July 1920 edition of St Mary’s Church Magazine indicated that:  “A very successful meeting was held on 7th June at which 69 members were present.  Hostesses were Lady Evelyn Maude and Mrs Peck”.    Lady Sibell Argles later became President, a post she held until her retirement in 1950, when Mrs. C Naish assumed the role.  Meetings were held in the Church Rooms on the first Wednesday of the month.

At the County Rally which took place at Epperstone in 1927, the first of many to be held, there were choral and dramatic competitions, folk dancing and a pageant of six episodes of local history. Edwinstowe WI performed “The Outlaws of Sherwood Forest” with Lady Sibell Argles (County chairman, 1931-l954) as Maid Marian.

In 1935, Edwinstowe had over 100 members.  Meetings continued during war time, and as the Programme for 1945 indicates, members still enjoyed their afternoons whether it was learning how to make rugs, having debates, exhibitions of produce, or listening to talks by visiting speakers. 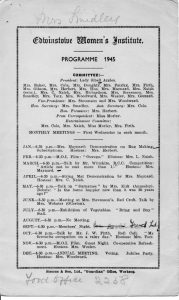 And did those feet in ancient time

And was the Holy Lamb of God

And did the countenance Divine

Shine forth upon our clouded hills?

And was Jerusalem builded here

Among those dark Satanic mills?

Bring me my bow of burning gold!

Bring me my arrows of desire!

Bring me my chariot of fire!

I will not cease from mental fight,

Nor shall my sword sleep in my hand

Till we have built Jerusalem

In England’s green and pleasant land.

“Jerusalem” which was first sung at the AGM held at Queen’s Hall, London in 1924, was considered to be a way for the WI to mark its links with the wider women’s movement and its commitment to improving the conditions of rural life.  This started a tradition which continues to this day and is often sung at monthly meetings.

In March 1937, the first County exhibition was held in Retford Town Hall.  Opened by Lady Listowel on the first day, and Lady Robinson on the second, and proved highly successful.  Edwinstowe WI were responsible for catering and Ratcliffe on Trent and Collingham the entertainment. 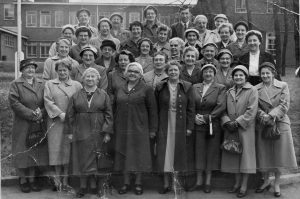 A group of members enjoying one of the coffee mornings.

The Chad newspaper reported on lst December, 1983 that as part of Tree Planting Week local people took part in a tree planting exercise at the rear of the Recreation Ground, Edwinstowe, on 27th November, organised by the NCC Leisure Services and Sherwood Forest Centre Rangers.  About 200 trees were planted, and WI members served coffee and tea during the day.

In 1969, Edwinstowe members celebrated their Golden Jubilee receiving congratulations from the County Chairman (Norah Moore) and Chairman and members of the Executive Committee. 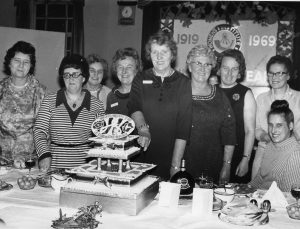 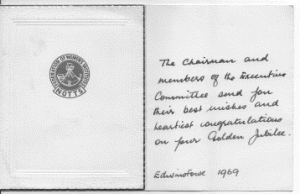 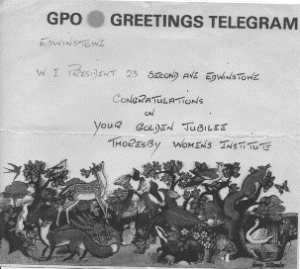 Then in 1982, it was time for the Diamond Celebration.

1987 was the 70th anniversary of the WI Federation and a County wall hanging was made with every WI having  a brick in the “wall”. 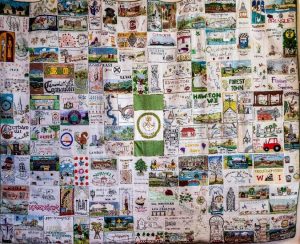 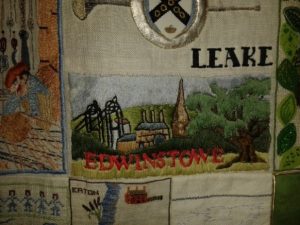 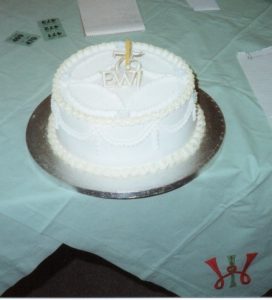 A celebratory cake in honour of 75 years, provided  by Mrs. Rotha Grace 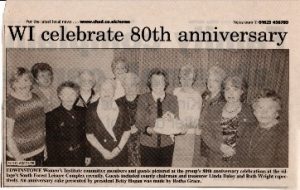 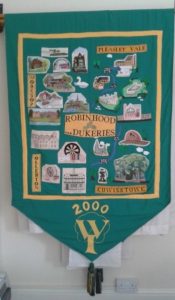 These are some of the past Presidents of Edwinstowe Women’s Institute:

Following the death of Mrs Sheila Norris, who was a VCO*, (Volunteer County Organiser) her husband Gerald donated a Rose Bowl, to be known as The Sheila Norris Trophy, which would be awarded by the Membership Committee for various competitions.

During the winter months the WI Darts’ Team met on Monday evenings, originally in the Jug & Glass pub on the High Street, and then at the Manvers Arms on Mansfield Road with competitions  taking place between other WI groups.   Over the years, the members have attended a variety of events and enjoyed outings.   Always ready to help, they have organised Coffee Mornings, held stalls at village festivals, selling home-made cakes and produce, and on four occasions catered for groups of people visiting the area.

Seventy years is an exceptional length of time to be a member of an organisation and, for that reason, at a meeting in 1997 sadness was expressed over the death of Mrs Edie Cole, who had been a loyal member of the WI for that time.  She played the piano to accompany the singing of “Jerusalem” at every meeting, almost every month, and had been involved with music most of her life, both giving piano lessons and being accompanist for several choirs.

Occasionally members attended the Denman College which is the WI’s centre for learning, offering a wealth of opportunities to learn new skills at day schools and short courses, including cooking and craft.  The college, which was founded by the NFWI in l948, was named after Lady Denman, the first Chairwoman of the WI Federation. 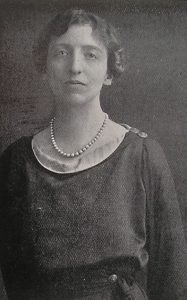 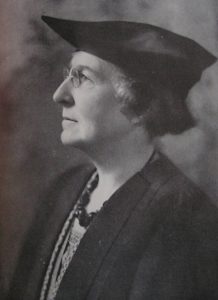 When the WI disbanded in 2002 money left in the fund was used as a contribution towards the purchase of bricks for Edwinstowe’s new cricket pavilion which opened in 2004. 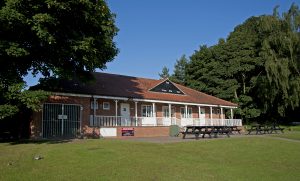 When Edwinstowe WI closed it was not the first time.   Having lapsed in 1974 the group reformed in 1977.

However, a new WI group the “Merry Women” was inaugurated in January 2018.