John Trueman, of Edwinstowe, was a little man, about five feet five inches in stature, with a broad and lofty forehead, over which his black hair stands erect, and a pair of large dark eyes . He had a hearty laugh and beautiful singing voice.

Close to the east end of St Mary’s Church is a splendid monument to John Trueman who died in a road accident on his 51st birthday on 3rd May 1853. Nearby are the gravestones of his shoemaker grandfather Simon Foster and father Reuben Trueman,  (literary friend of Christopher Thomson.) John, unmarried, lived in Trueman’s Yard with his widowed mother. His burial was paid for by public subscription.

Why was such a splendid monument erected for a shoemaker in a quiet village on the edge of Sherwood Forest? The simple inscription is still legible, but the eroded opposite face probably told how he became a well-respected entomologist, breeding rare butterflies and moths from Sherwood Forest and selling specimens to collections including the British Museum.

January Searle wrote in his book, ‘Leaves of Sherwood Forest’,

Two of John’s brothers, George and Henry, established themselves as Bootmakers in the Parish of St James Piccadilly with their sister Eliza as housekeeper. By tragic coincidence, two years after John’s death, George Trueman died aged 49yrs when he was pushed off the platform under a train returning from Epsom Races on Derby Day in May 1855. He died four days later in St Bart’s Hospital where he told his brother Henry that he wished to be buried in Edwinstowe churchyard near John. There’s no trace of his gravestone now. 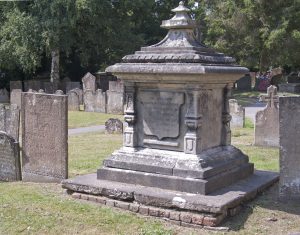