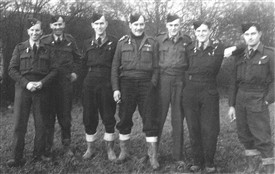 The crew pictured in Nottinghamshire, Bill Taylor is third from the right – via Jane Bealby

The Newark Air Museum is assisting Jane Bealby from Edwinstowe with research on a wartime aircraft training crash near Edwinstowe, Mansfield, which happened on 26th February 1944.

The aircraft from 1661 HCU at nearby RAF Winthorpe (now home to the Newark Air Museum) was on a training flight.

Five airmen lost their lives in the crash and one survivor was taken to Mansfield General Hospital. We would like to appeal to anyone who might have been nursing at that time in Mansfield and who might remember an Australian airman being brought into the hospital.

As it was wartime, Jane is not sure which of the emergency services would have been called to the scene, but believe that the police, fire, ambulance service crews might have been informed. Other Civil Defence units might also have been involved such as the ARP and the Home Guard.

If anyone has any information regarding this crash could they please respond here, or via email to admin@newarkairmuseum.org 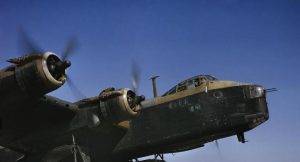 The Stirling Mark 3 bomber, lost at Edwinstowe on February 25th 1944, took off from R.A.F. Winthorpe, Newark, at 18.30, Aircraft No. EF127 flight No.1661, a heavy conversion unit, was on a cross–country flight. On its return journey, at 01.30a.m. 26th February, it ran short of fuel and sent a Mayday call, which was picked up by R.A.F. Syerston, but no response or acknowledgement was received from the Stirling.

It was found in the village of Edwinstowe, at Broomhill Grange, at the northern end of Sherwood Forest, near the A6075. The Stirling hit some trees near Archway House. Crashing into a field on a small hill, it slid across the field and into a hollow, breaking up, the main fuselage and tail section landing near the farmhouse.  No one in the farmhouse heard the crash: Two of the four engines went through a hedgerow and stopped approximately half a mile away from the rest of the aircraft.  The bomber had a crew of seven, of whom five were killed, two injured.  The two servicemen who survived raised the farmer Mr Bealby to phone the Rescue Services, the phone number being No.4, the telephone exchange on the High Street.

A convoy of Army lorries, including cranes, was sent with soldiers from Edwinstowe Camp on the Forest to remove the wreckage. Eyewitness, Gordan Kellet, informed me they had to make a new entrance into the field near the farmhouse to get the aircraft out. The fuselage was taken on a Queen Mary, (R.A.F. name for a low-loader), and the aircraft was taken to Newark, to the 54.M.V.U. recycling sheds and workshops, where the Waitrose shop now stands.

The surviving crew were from the Royal Australian Air Force: Flt/Sgt R J Plath, service No. A429483, Mid Upper Gunner, was treated at Mansfield General Hospital, while Flt/Sgt W I Taylor, service No. A434558, Rear Gunner, was treated at R.A.F. Winthorpe, Newark, for minor wounds in the sick quarters. Sadly, having survived a major air crash, he failed to return from Bruunschweig in May 1944 and, with the rest of his 630 squadron’s crew, he is commemorated on Runnymede Memorial, West London, for airmen’s bodies that have not been recovered. 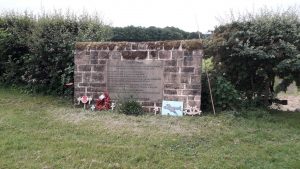