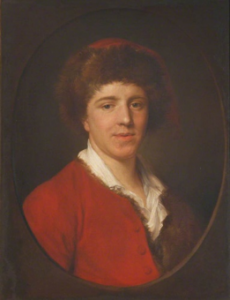 Painting by Pompeo Batoni, in the Bodleian Library, Oxford

George Oakley Aldrich was born in 1721, the son of Thomas and Grace Aldrich of Holborn. Educated at Eton College, matriculated at Merton College, Oxford, B.A., M.A., M.B., and M.D. and, went on the Grand Tour.  He was in Rome in 1750, with friends, including John Neale (later vicar at Mansfield Woodhouse) where time was spent viewing the paintings of the palaces.  While in Rome he had his portrait painted by the artist Pompeo Batoni. https://en.wikipedia.org/wiki/Pompeo_Batoni

George’s first marriage was in 1753 to Anne Bland, in Surrey.   Burial records in Ollerton Church recorded Anne’s death on “19th January, 1785 aged 66, of Cockglode in the Parish of Edwinstowe”.  Subsequently in 1788 he married Sybilla Benson (some forty years younger than her husband) in St Mary’s Church, Edwinstowe.  Sybilla was one of 5 daughters of the Rev Thomas Benson, rector of St Margaret’s Church, Bilsthorpe, Notts.   http://southwellchurches.history.nottingham.ac.uk/bilsthorpe/hintro.phpShe died in 1802 in Bilsthorpe and was buried at Holy Trinity Church, Kirton.http://southwellchurches.nottingham.ac.uk/kirton/hintro.php

In 1776 George became the executor and residual legatee of Mrs Jane Neale, the mother-in-law of the Rev. Thomas Neale.

While residing in Mansfield Woodhouse, in 1776 George was attracted to Cockglode House near Edwinstowe, and requested help from the Duke of Portland and the “Duchess of Kingston” to get a lease of Cockglode for which he was willing to “lay out a sum in building such a mansion as might suit a true Philosopher upon the enjoyment of it being secured to him for life”.

In a letter from George to the Duke reckoned to be 26th December, 1776, he explains why the expense of rebuilding Cockglode has gone over budget and asks for the Duke’s help.  As compensation he says, ‘Supposing that Myself and Wife were both to die before, or soon after, actual possession (a case much within the verge of possibility), the whole of what I have so newly done is your Grace’s for ten years without a mite of cost.’  An indenture and counterpart lease between (1) William, Duke of Portland and (2) George Aldrich of Edwinstow, doctor, and wife Ann, for a new capital messuage, with 18 acres 1 rod and closes of 45 acres 3 rods 28 perches, for their two lives at ten guineas per year, is dated 23 August 1777. 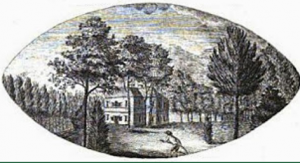 Often box pews in churches were owned privately.  Thus, on 2nd May, 1778, George entered into an agreement with the Rev Mathew Markham for the purchase of a pew in St Mary’s Church, Edwinstowe: 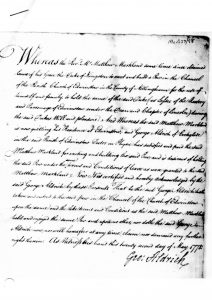 The following are extracts from the Journal of the diarist, William Gould, who was Steward to the Duke of Portland at Welbeck Abbey:

Breakfasted with Mr Ginnever and Dr Aldridge at Mr Smith’s, went to the infirmary, where the Duke of Portland and Lord Edward Bentinck arrived from  Mr Sedleys… the cavalcade which consisted of the mayor and aldermen accompanied by a  great number of gentlemen, proceeded through a very great crowd of spectators to St Mary’s Church, the Bishop of Gloucester preached a sermon but I was seated at some distance and could not understand his discourse.  A collection was made at the church doors by his grace and Mrs Musters, Lord Edward and Mrs Edge, Doctor Aldridge and Mrs Milnes, which amounted to £166 for the benefit of the infirmary.”

“Apr 24th, 1795.  Doctor Aldridge came here this forenoon to balance accounts for some rent and wood he had received, a part of this was for the repairs of his ring fence at Cockglode.  These stoops and rails that Dr Aldridge refused to pay for or even for the working or carriage, he said he should only be at the expense of putting the fence down.  To this I could not agree and the business was deferred for the consideration of Mr Heaton.”

“July 18th, 1795. Major Boothby came over from Edwinstowe said Mr Pierrepont, Dr Aldridge and many other gentlemen had entered into a subscription to supply the poor in the neighbouring towns for 6 weeks, this scheme is to give 6d per week for every child.”

On another occasion the Vicar Rev Gordon was told that he was not allowed to fish in Aldrich’s lake.

George Aldrich was noted as meeting socially with Mr Gould (for breakfast, and dining with Gould and the Dean of Lincoln), as well as on estate matters like paying his rent.  It must have been after one of these meetings that on 14th August 1788 Gould had to inform the Rev. Mr Turner of Ollerton that “he must not in future shoot in the Lordship of Edwinstowe, from a complaint exhibited against him by Mr Aldrich”.

George helped raise subscriptions across Nottinghamshire for the benefit of the Nottingham General Infirmary in 1787 and was also a commissioner of the Worksop-Newark turnpike road in 1788.

The will also left an annuity of £12.10s to enable a service to be held every Sunday in Ollerton Church; and a considerable sum to the University of Oxford to endow lectures in chemistry, anatomy and medicine.  The Aldrichian professorships were instituted in 1803 following Sybilla’s death.

When reading the list of beneficiaries, it is apparent that George Oakley Aldrich must have been a very wealthy man.  Few records survive to indicate the kind of lifestyle he led, although he must have had a respectable social standing in view of his wide circle of friends, many of whom were connected with the church.

In 2019 the BBC televised a programme Britain’s Lost Masterpieces that detailed the cleaning of a portrait that had languished for many years in the Bodleian Library.  The portrait was of Dr George Oakley Aldrich.  In 1837, twenty-five years after Sybilla’s death, one of her unmarried sisters, living in East Retford, offered the portrait to Oxford University.   The offer was accepted.  The picture was first listed in the Bodleian’s catalogue of the Picture Gallery in 1839 but there was no knowledge of the painter, although it was believed to have been executed when Dr Aldrich was in Italy. https://www.facebook.com/bbcfour/videos/britains-lost-masterpieces-pompeo-batoni/514992276011560/

During the course of the cleaning process, it was discovered that a facial scar had previously been covered over.   After treatment at the Simon Gillespie Studio, the painting was recognised by Dr Bendor Grosvenor as a work by the great 18th century Grand Tour artist Pompeo Batoni.  He pointed out similar features which could be seen in other work by Batoni.