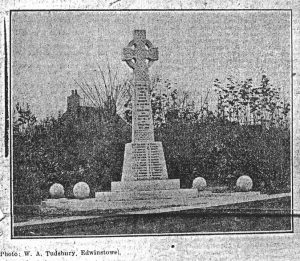 On Sunday afternoon in the presence of a very large assembly, the Memorial Cross erected by the people of Edwinstowe to the men from the parish who laid down their lives in the war, was unveiled with solemn and simple ceremony. The unveiling was preceded by a service in the Church, which in its self was a tribute to the gallant dead, and an expression of the love and pride the people of Edwinstowe entertain for those who made the supreme sacrifice.

The members of the local branch of National Federation of Discharged Sailors and Soldiers, former comrades of the men who fell, marched from the bridge which crosses the Maun to Church under the command of Colonel Hardy, the parade being watched with much interest. Although the weather was most unfavorable, rain falling heavily, the ancient Church was very full. The congregation including Lady Cicely Hardy, Lady Sibell Pierrepont, Lady Eveline Maude, Lady Clementina Tottenham, Mrs. Bond, Mrs. Wright, Mrs. Armstrong, and many others who did such useful work for “our boys” during the war. The clergy officiating was the Vicar the Rev. F. C. Day-Lewis, former Vicar of the parish, who was present by special invitation of the committee, the Rev. F. Hallam, Curate and the Rev. A. Robinson Minister of the Worksop Wesleyan Circuit.

The memorial consists of a Runie cross of grey Cornish granite, fixed on a die and two bases and is surrounded by kerbs, with balls on small pedestals at the corners. The lettering is in imperishable lead type and the whole was designed and executed by Lidster and Bramer, Worksop, and is a most creditable piece of work.

The service commenced with the hymn, “Lets Saints on earth in concert sing” followed by the opening sentences’ of the Burial Office read by the Vicar. The 90th Psalm was chanted and the lesson 1 Thess., iv, 13-18, was read by the Rev. A. Robinson. The hymn, “On the Resurrection Morning” was sung and the Rev. E. V. Bond, the addressed the congregation basing his remarks on the word “Remember”. Mr. Bond spoke under the influence of great feeling. They were, he said going to dedicate that beautiful Cross to the Glory of God, and in the memory of the men of that parish who fell in the Great War in the faith of Christ. It seemed like a nightmare to remember those anxious days beginning in 1914. The cross they were erecting would remind them of the sacrifices made in those years of war, and it should remind them that God’s hand was manifest throughout the strife.

Had they forgotten the awful Spring of 1918, the skill that was given to our critics, and the spirit that gave our men such wonderful courage. “I remember very well” he continued, the songs that our men used to sing whilst on the march along the road, and the cheers at the station which rent our hearts. Remember how we were inspired as a nation by God and hoe He answered those increasing prayers we raised before His throne. Of the men who fell of whom there are 28. I knew quite well, and I remember how those whom we used to call the rough boys of the village came to me to say goodbye. I knew when they came that their hearts were right. Therefore, in memory of those who fought and fell, I say to those who mourn, they were your boys and they were my boys, and they have fallen in the true faith of Christ, and it is for us to live here with true union with Christ in order that we may join them. To you who mourn those loved ones, remember the cause for which they died, the cause of justice honour and truth, and the cross is to remind you of it. Remember those men laid down their lives for England, and that there is one thing which ruins a nation, ‘a kingdom divided against its self’ cannot stand. Therefore, do not let us forget the country of which we belong, and by our unselfishness cause strife, for if we do those men will have died in vain. Let us strive to make this world a nobler and brighter one living lives of consideration, going forth to fulfill the very purpose of our creation.

In conclusion, he said he had travelled 150 miles to bring to them, out of love for those men, he knew so well, and to those amongst whom he had ministered for ten years, just that simple message, ‘Remember’ After the singing of the hymn, “For all the Saints” the congregation, preceded by the choir, clergy, and the ex-soldiers, processioned to the Memorial Cross for the unveiling ceremony.

After prayers, the Vicar read out the names of the fallen, and asked Mr. H. D. Argles representing Lord Manvers who at the last minute was regretfully prevented from being present owing to indisposition to unveil the cross, which was draped with the Union Jack. Mr. Argles did so, saying, “in the full faith of Jesus Christ crucified in memory of those who laid down their lives, and those names have been read I unveil this memorial. 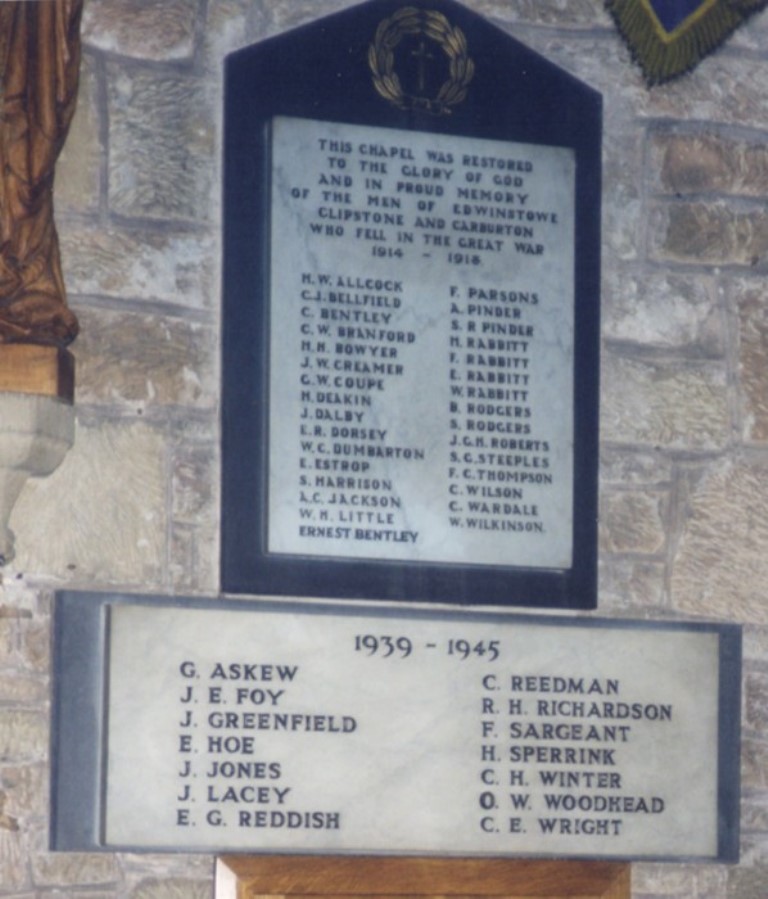 Edwinstowe Cenotaph sited at the top of the High Street 2017 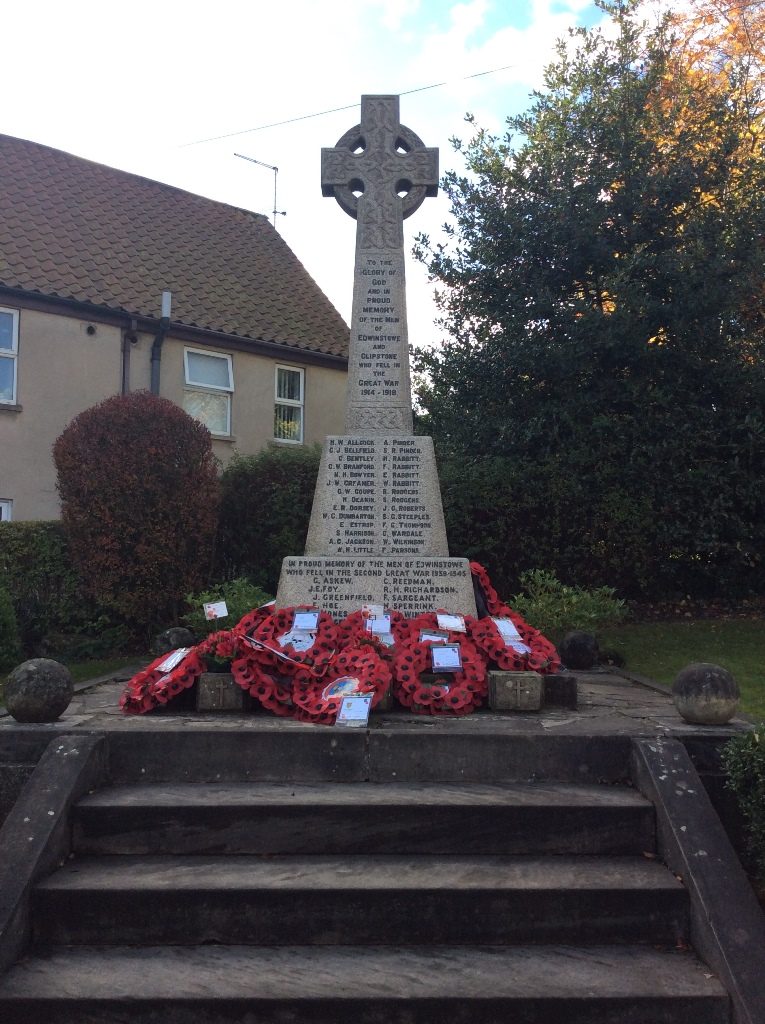 Monument to commemorate the ending of WW1 17th March 2019