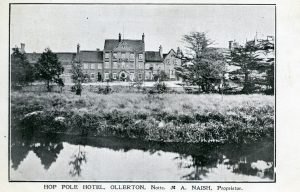 In, 1832, it was recorded that the nearest Post-office was at the Hop Pole Inn, Ollerton and the Post master was Joseph Lister. 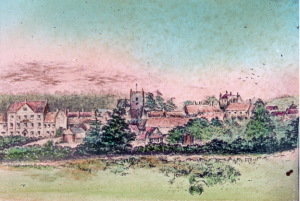 Letters were despatched by Mail Gig (coach) to Newark. However, things were about to change as on the 1st of August, 1840 it was announced in the newspaper:

‘Another Cheer for Rowland Hill (Post-office reformer and introducer

of the Penny Black) – The government has appointed a post-office at Edwinstowe, in this county; likewise, a messenger to deliver the letters and newspapers free in the villages of Edwinstowe and Rufford. Thursday week, 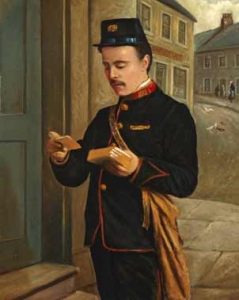 the twang of the rural postman’s horn was first heard in those remote, but mind musing localities, to the no small delight of the little urchins that were running after the novelty, and the no less gratification of those who have been for some months past pressing the necessity of a free delivery of letters in those places upon Thursday week.’ 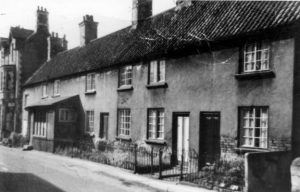 In March 1842, a letter was successfully passed to Mr. C. Thomson through the Ollerton Post office and then onto the Edwinstowe office addressed:

And hasten, for the writer’s sake.

Who live beyond the bridge, you know;

The river’s pleasant bank upon-

And he’ll the other penny pay!

Obviously, the letter was delivered. I wonder who sent it and what did it say.

‘Success of the Post-office extension. – Since the establishment of the post-office at Edwinstowe, in August last, the number of letters to and from that place has doubled.’

The villages were very pleased with the Post-office so on Monday 6th November 1846, ‘the villagers of Edwinstowe sat down in goodly numbers to partake of a social tea. After which C. Thomson presented a splendid electro-plated ink-stand, to Win. Dracott, Esq., in respect and gratitude for his unceasing exertions in procuring the establishment of a Post-office at Edwinstowe.’

‘Post Office at Mrs. Ann Cotton’s. Letters via Newark arrive at 9 a.m. and despatch at 4.20 p.m. Mrs. Cotton delivers in the Lidgett and Clipstone districts, and Henry Howard in Edwinstowe, Budby, and Carburton districts.’

Her daughter Maria, was listed as letter deliverer in the census at that time. (Reminiscent of ‘Lark Rise to Chandleford’ BBC 1 2010) Mr. Cotton, her husband, was a stonemason.

Later, in 1885, the name over the shop door was Richard Westland Marston. The Nottingham and District Trades’ Directory of 1885 lists him as; grocer, ale, porter, wine & spirit merchant, and postmaster. Letters arrive at 8.30 a.m., and were despatched at 4.20 p.m., via Newark. Ollerton was still the nearest Telegraph Office.  Richard boasted to others in the village that he had famous relatives; the eminent dramatic poet, Dr. Westland Marston and his cousin, Sarah Hoggins, of Bolas Magna, in Shropshire who later became the Countess of Exeter and was the heroine of Tennyson’s poem, “The Lord of Burleigh,”

The Post-office provided other services to the community, such as, adverts, holidays and local employment available, for example,

In December 1888, the Sheffield Telegraph reported that there had been a Daring Post-office robbery.

‘A book containing pounds worth of postage stamps was surreptitiously taken away by dexterous (nimble fingered).’

Some years later, on the 22nd August 1892, another robbery took place.

‘A mysterious case of robbery occurred at the Post Office last week. The postmaster R. W. Marston, upon closing the office, locked up the cash in the safe and when retiring for the night (Wednesday) took the keys with him into his bedroom. After going into the safe the next morning, the cash box was broken open and the sum of £20 was missing. Information was at once given to the police but up to the present, the money has not been traced.’

Richard’s wife, Anna (nee Oldham) previously from Budby died in 1893, aged 74 years, and the following year, 1894, Richard died. He was a Churchman and a strong Conservative, always taking an active and energetic part in promoting Conservatism in and around Edwinstowe and Ollerton.

The next Postmaster to be appointed was Mr. Henry Symonds. Parish and newspaper records show he was a Parish Councillor, that he entered many local flower and horticultural shows and he was an ardent cricketer. 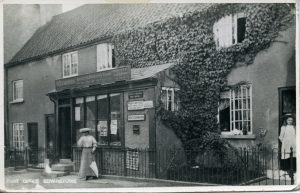 Local job adverts were still directed to the post-office as on the 31st January 1896;

‘a strong Girl, 17 to 18 years of age as X Under Servant in a nobleman’s dairy in Notts. Apply c.o. Symonds, Post-office Edwinstowe, Newark.’

In November 1899, a telegraph office opened at the Edwinstowe Post Office.

Henry died on the 20th October 1916 when he was 70 years of age. The Mansfield Reporter, stated that;

‘Mr. Henry Symonds, of Edwinstowe, had lived in Edwinstowe practically all his life, and had taken a prominent part in many public matters. He was formally a member of the cricket club, and a prime mover in the formation of the Dukeries Posting Proprietors’ Association, 1899, 17 years ago. In politics, he was a Liberal of the old school. He had held the post of sub-postmaster at Edwinstowe for nearly 20 years.’

He was commended for taking a prominent part of village life.

Henry Tyndall was the next Postman to be appointed. He was an enterprising man, and as well as a busy Parish Councillor, postcard producer (for the tourists) and an enthusiastic cricketer. 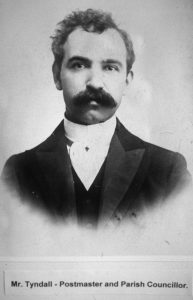 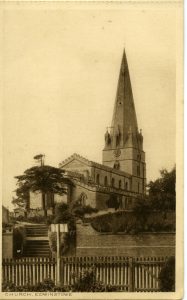 St. Mary’s Church was one of the many postcards produced by Henry. It was a favourite of many locals and tourists. More in the slider below. 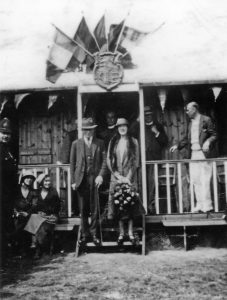 It was reported in the Mansfield Reporter, on Friday May 26th 1933, when the Edwinstowe cricket pavilion was opened by Lady Sybil Argeles;

‘The match for the occasion, Edwinstowe v Rufford Abbey provided the thrill of a very sporting finish, for the home side only won by the narrow margin of two runs.

Edwinstowe were fortunate in winning the toss, and the brothers Charlie and Frank Tyndall (Henry’s sons) opened the innings on a perfect wicket. F. Tyndall being unbeaten with 41.’

Charlie, and his brother Phil, were keen cricketers and it is believed that Paul Tindall was a green keeper for the club and umpire. 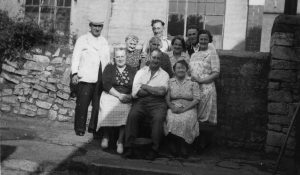 Later in October 1922, there was an advertisement in The Mansfield Reporter; 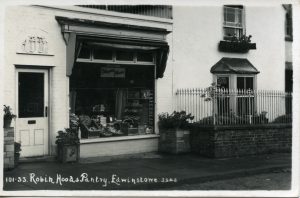 In the 1930s, a purpose-built Post-office was built next to the Forest Lodge on Church Street. A Post-office insignia can still be seen above the door. During the war years, September 1942, the positions of ‘Post-office clerk, full-time and part-time wanted immediately. Applicants to be fully competent, all duties and state terms.’

Most of the men in the village would have been either working down the mines or away in the forces, so probably only women would have applied. 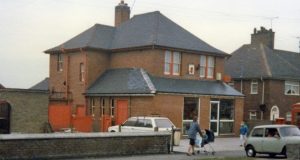 Later, the post-office was moved to Mansfield Road. Mr. & Mrs. Sinclair continued to run the post office at that time. Church records show that in 1926, they successfully raised money towards repairs of the Church boiler. They also produced and sold postcards to the tourists. In 1941, Mr. Sinclair was listed as a Stationer. 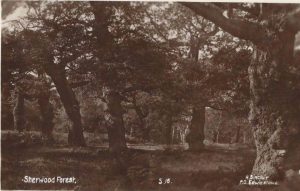 After their retirement, Mr. & Mrs. Bowring were then appointed, and after Mr. Bowring died, Mrs. Bowring married Mr. Riley and together they continued to provide a comprehensive service for the village for many years. Mr. Welsh was the postman, Ruby Burns and Marian Wrobleskie were the post-ladies and a young woman, Betty Hayes, worked behind the counter. Betty, who lived down First Avenue, was well-known for always being so polite.

Local letters were delivered twice a day and if local they were delivered on the same day. However, if you were in the shop when a telegram arrived, you were asked to deliver it on the way home.

Outside the post-office was a dispenser for postage stamps, as well as a telephone box which had a telephone directory (that smelt of cigarette smoke) on the shelf. It never went missing.

The building is currently the Bright Beginnings Nursery. 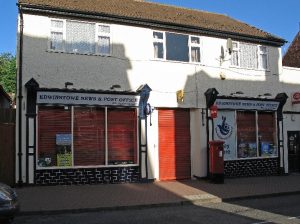 In the 1990s, it moved to Mills newsagents on the High Street and business continued as usual. 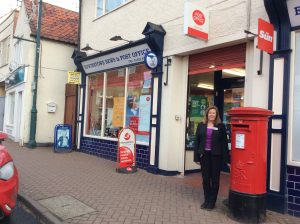 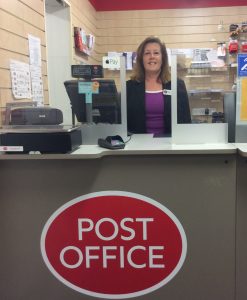 Now in 2016, Sandra Scaife is our Sub Post-Mistress and in many ways, the business is very similar, to the one that Mr. Marston ran so many, many years ago; general store, grocer, wine & spirits, and post-office. The ‘post’ is still collected at around 4:30 each day and Sandra is here to serve the village.