Doreen Fensom and her twin sister born and raised in Sheffield. At the age of eleven years they were evacuated to the rural community of Collingham. Doreen and her sister saw the countryside for the first time. They had never seen a cow and the only trees they knew were those in the local cemetery. They were taken back to Sheffield back to the noise, sooty fumes and munitions factories.

Doreen, at the tender age of twelve vowed that as soon as she was able, it was back into the country to live. When she was seventeen she attempted to join the Land Army but was told to re-apply when she was older. She continued to work in the cutlery factory but she never lost her dream to move to the country.

Her dream came true when the Land Army accepted her; she finally left Sheffield for the open spaces of Nottinghamshire. Her favourite chore was threshing and she was in great demand by all of the farmers, including Bradleys’ of Clipstone. The job she hated most was pulling flax as it cut her hands and fingers to shreds. Many times, the girls would work in the lashing rain, freezing snow or burning sun for eight hours at a time. The girls worked long and hard days walking to the fields from the farm houses where they were dropped off by lorries. They worked for the princely sum of £1 a day, less board, lodging and laundry.

Doreen was also paying nine pence a week for a bike she was buying through the Land Army. Her take home pay was £1. 3 shillings a week. They may have worked hard all day, but night was the time to be out until curfew which was 10 pm in the week, and 11 pm on Fridays. Doreen was transferred to the Old Clipstone Hostel, on the rat-hole (announced as Virgins Island by the conductors of the day). It was whilst she lived there she met Roland the man she eventually married. 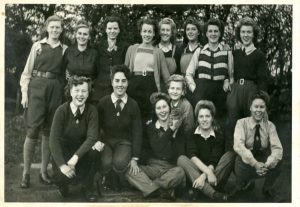 Ena Mason , sister to Pete (Pop) and Alan Mason who both served in the Royal Navy. 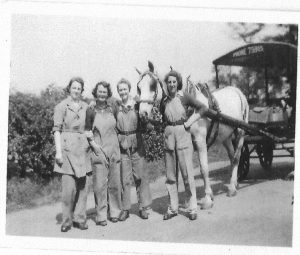 The Call of the Running Tide    (from the Acorn Newspaper)