The Edwinstowe Camp at Birklands was initially occupied by the Army who were tasked with providing security for the Munitions being stored in Sherwood (Clumber, Thoresby, and Welbeck Estates) – they controlled access to the ASDs mounting road blocks and patrols. It was one of the largest ammunition storage depots in the country and covered over 100 square miles. It was called CAD Warsop. During the war, the U.S. Army stored ammunitions there.

Clumber Park stored over 60,000 tons of ammunitions which were kept in stacks covered with corrugated iron. The Army Pioneer Corps and local POW moved the ammunitions through the forest on a rail track.

The R.A.O.C. were responsible for weapons, ammunition, armoured vehicles, clothing and general stores such as laundry, mobile baths and photography. 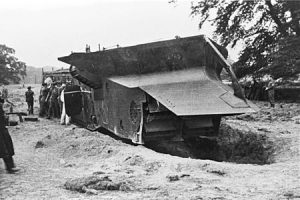 In 1941, Clumber was used for secret trials using a trench digging tank code-named MH956, a naval land machine called ‘White Rabbit’ and a cultivator called ‘Nellie’. The tank was 23.5m long, weighed 130 tons and could move 100 tons of earth in a minute. Winston Churchill, using the name ‘Colonel Warden’, visited Clumber in November of that year, to inspect ‘Nellie’.

After the war, Sherwood Forest was used to stock pile unwanted ammunition, until they could be re-used or destroyed. The site was closed in 1954. 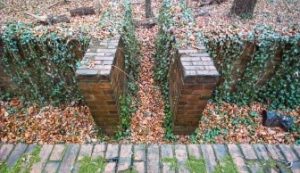 “With the advent of the warm weather, the bogey of Depot fires has reared its ugly head, and already we have had more than enough trouble from this source. However, it is almost worth it all to have some sunny days. We hope all our newcomers are enjoying Sherwood Forest in ideal ‘trippers’ weather.”

“Our work continues, and we will soon commence to run down. We welcome our new I.O.O., Captain Franks, to help in the clearance of Sherwood Forest, and S/Cdr. Palling who is teaching our clerks and storemen a thing or two.”

“The football team have won the championship of the Mansfield and District Wednesday League having completed their fixtures without losing a league match.”

“On the 13th of August, we had an exercise in Sherwood Forest which everyone thoroughly enjoyed. On the 14th there was a Gymkhana on the Sports Ground with a varied programme of mixed events. The whole weekend was a great success.”

“At our present rate of clearance, Sherwood Forest will soon be back to the condition it was in pre-war days. Already we are finding out how popular a pleasure resort it is.”

Today the arrival of Capt. R.V. Harley to inspect the depot.

Who was Capt. R.V. Harley? His job was to inspect that the forest was being cleared of ammunition and restored to a good condition. He was born on the 2nd August 1919 and died on the 19th August 2010, aged 91. 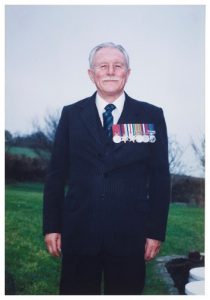 He was a very brave man who was awarded the George Medal in recognition of his gallant and distinguished services following an explosion.

His story is below.

Ronald Victor Harley (243086), was on duty at No. 3 Central Ammunition Sub-Depot, Hampstead supervising ammunition. He was in the sorting shed when a round of ammunition exploded and injured six soldiers, one of whom died later. The blast was so violent that it blew other shell to pieces, reduced many more to a very dangerous condition, started a fire, and blanketed the area with smoke.

Captain Harley immediately ordered all men out of the building, leaving it himself only when he could see no more men. He re-entered the building almost immediately to find some injured men running out. Without hesitation, he went right up to the scene of the explosion which was still enveloped in smoke, and saw flames. He ordered a soldier who was at his side (No. 14441727) Pte. McGarrigle, to fetch fire appliances, and himself went further into the smoke where he found a badly injured soldier staggering about. By this time another helper had arrived and Captain Harley, after seeing that the injured soldier was being evacuated, ran to the office next door to call the ambulance and fire brigade. Next, he saw that all the casualties were being attended to, and ordered the most serious cases to be taken to hospital straight away. Then he again went to the scene of the explosion to check that the fire was out and that there were no further casualties, and finally ordered a roll call to see that all his personnel had been accounted for.

Captain Harley showed bearing and leadership of the very highest order, and undoubtedly his exemplary behaviour affected the discipline of the men under his command in their efforts to extinguish the fire and help the casualties under very hazardous circumstances.

Later he became a Major. What we must remember is that this is not a made-up story but it is about a real person who lived here and helped to protect our village and country. In June 2016, his medals (in the picture above) were sold by a Pawn Broker for Â£3,200. How does this make you feel?