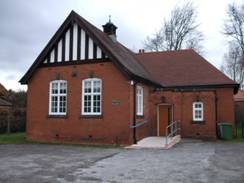 [JH] “It was built in 1913 by Earl Manvers in the garden of Manor Farm. The police house was built on the tennis court, and the garage in the orchard, there used to be a lane going from Mansfield road to the paddock between the orchard and the school playground.  There was a holly hedge in front the church room to the lane next to the playground.”

[SM] “I can remember as a child going to the Church Rooms for the dentist during the 1940s. It is engraved on my mind, the first time that I saw the Dentist. You sat to the left  going in the door, the dentist was down where the counter is now behind a  cloth screen with an assistant, you could hear every word and scream…. I was petrified. Then I saw the dentist he was tall and thin, with black hair and a black tash. Can’t remember much after that, put me off going to the dentist  for years…” 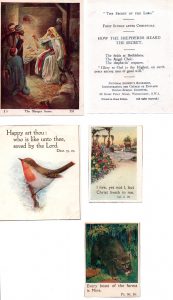 [MW] “In early 1940’s I attended Sunday School run by Miss Wardale and we were given these bookmarks.”

[JH] “I can remember going to Sunday school in the Church Room, Miss Wardale and Jean Gatward in charge also some parties, wedding receptions and the school dentist who used a drill driven by his foot.  There was a sliding partition in the large room, it was always cold in there people complained but nothing was done.”

[UC] “In the 1950’s Reverend Pickles started a Youth Club after Sunday Evensong when the young folk sat in the back pew. We did square dancing, which I loved, led by a young chap called Michael. There was also table tennis, but I wasn’t into that!” 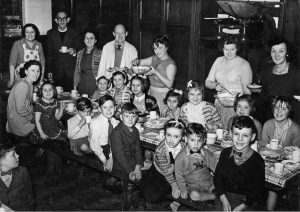 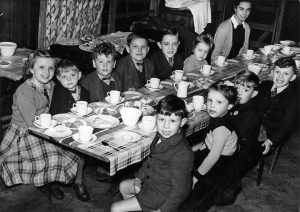 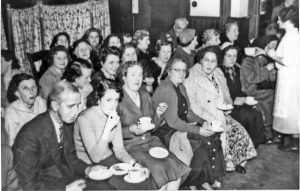 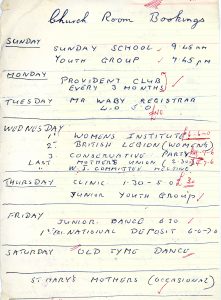 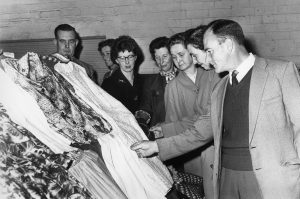 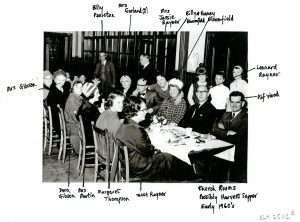 Whilst Reverend John Ford was Vicar in the mid-1990’s architect Ian Basely remodelled the Church Rooms installing a false ceiling. Members of St Mary’s Church helped with the redecoration. 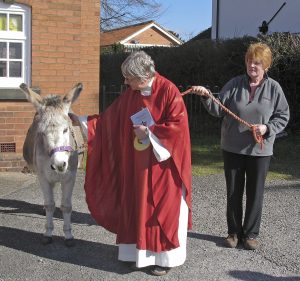 During Lockdown 2020 the interior was totally redecorated and a new kitchen (with an electronic serving hatch) was fitted. It is the venue for our Edwinstowe Historical Society meetings.