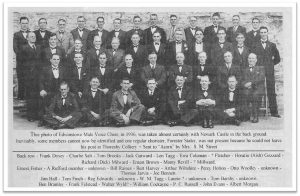 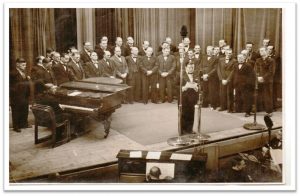 Evening News – Singing Miners, A new and novel chapter was last night added to the history of Edwinstowe’s Thoresby Colliery, when 40 of its employees broadcast the most popular item of all in a variety relayed from Nuneaton Co-operative Hall. It was a 45-minute variety of selected artists entirely from the mining industry. Notts was represented by Bestwood as well as Thoresby. The Thoresby contribution which scored the loudest applause of all was a rendering of the ballad “Love could I only tell thee” The 40 men in the choir include both underground and surface workers and when introducing them the compare remarked “It may interest you to know that these singers come from a pit which beat its target right throughout the war”

BBC at the Cinema. The BBC is conducting a sing-song at the Major Cinema on Easter Sunday. A selection of BBC Singers and Jack Jordon’s Orchestra will attend. The male Voice Choir and other local talent will participate. Extracts will be recorded for broadcasting at a later date. The concert is being organised by the Male Voice Choir. 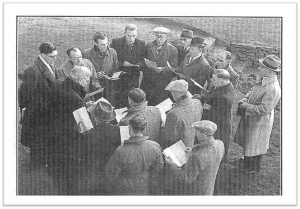 The cultural life of our village suffered a severe blow with the disbanding of the Male Voice Choir which had offered performances of choral music over a period of half a century.

The choir was supported by the former Bolsover Colliery Company owners of Thoresby Colliery when mining began in Edwinstowe. The choir rehearsed   free of charge in the Welfare Hall, Percy Holton its first conductor, accompanied by Matt Hayes pianist

Membership was open to all male singers; they gave local concerts and entered a number of Music Festivals. Its practices were held on a Sunday morning but in war time, the men worked such long hours underground that they appreciated a lie-in on Sunday mornings, and Sunday afternoon became the favoured meeting time.

The choir participated in the Blackpool Musical Festival which ended on the eve of Remembrance Sunday, choir members would attend the Remembrance Service many of them accompanied by their wives.