Historical records of water and wind mills go back to the first century BC. Before this time, quern-stones were used.

The Doomsday Book, in the late 11th Century, records over 6,000 watermills in England. There would have been a mill in every Medieval village and that would have included Edwinstowe.

The Lord of an area would have had to provide services for the local peasants which often included a mill, a bakery, a justice court, protection and sometimes a parish church. Mills were usually located on feudal estates and the miller, a valued member of society, would usually live there.

This flour mill stood on the hill just off Mansfield Road. 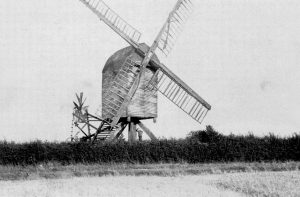 Wooden windmills such as this one were very common around the forest area. This photograph was taken by  R W Appleby from Edwinstowe. Mills of this design were similar to those built in the 1600s. 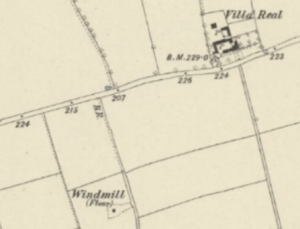 This map shows that the mill was working in 1883. 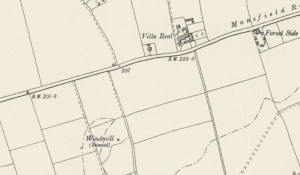 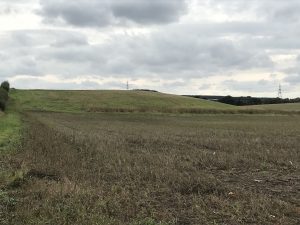 Watermill by the River Maun

Records and old maps show that there was an ancient water corn mill beside the River Maun in Edwinstowe in the 17th century. A mill had probably been on this site for many years before this time. Records show (see 1638 map below) a mill in the South East corner of Burn’s Brake (Burnes Breakes). 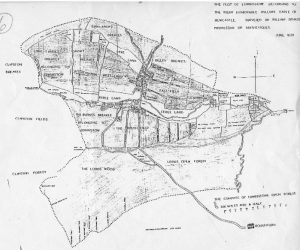 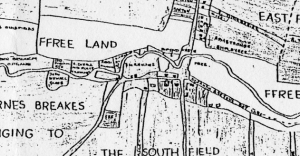 In April 1827, there was a public sale of all the machinery from the mill. This included the wheels, shaft, grinding stones, sack tackle and flour cylinder. Later that year, in November, as plans for a new road from Edwinstowe to Clipstone were planned, a notice was given by Order from County of Nottingham for;

“diverting and turning a certain part of the Highway within the Parish of Edwinstowe, in the said County, lying between Edwinstowe and Clipstone, in the said Comity, commencing near the site of the ancient Water Mill, in Edwinstowe aforesaid, which has been lately pulled down and removed, and extending towards Clipstone.”

Notification for the village.

“Nov.’ over, and along the Northwardly side of a Parcel of Land, in Edwinstowe aforesaid, called the Mill Dam, and recently used as the Dam to the ancient Water Mill there, now pulled down.”

The new road was called Mill Lane. The map below shows the area in 1883 which includes Mill Cottages and a working sand pit across the road. The area to the South was a hamlet called ‘Hazel Grove’. 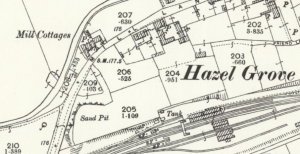 Archive and newspaper records confirm that there were millers living in the village during this time. It does not state at which mill they worked. However, all these dates are after the Ancient Water Mill was pulled down.

The mill may not have been at Edwinstowe.  White’s Directory of 1853 records Robert Padley, corn miller living in Edwinstowe. 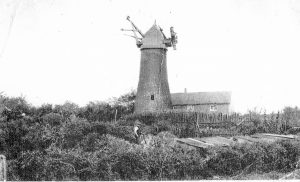 Building started in the early 19th century and was raised higher in the middle C19.  It was built of coursed squared rubble and brick. It was roofless with a round tower. The windows were metal casements. The first stage had a boarded door with a concrete hood. Opposite the door was a  casement with 2 other casements at this level . The second stage had 4 more casements. On the third stage there was a blocked window to south west and single casements.

In the late 1800s the mill was often used for the start of the Rufford Hunt; 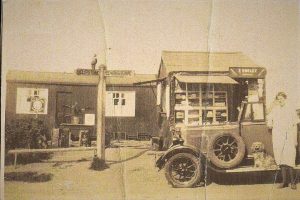 Eliza and William Hooley sold refreshments at Warsop Windmill. The address was Bungalow, Forest Road,  Market Warsop and census records show they were living at the mill in 1939. The hut was probably one of the WW1 huts that were originally used at Clipstone Army Camp. They sold lemonade, orange pop and other refreshments from the window. 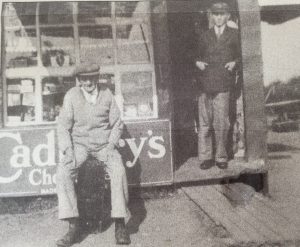 William Hooley outside the shop c1920 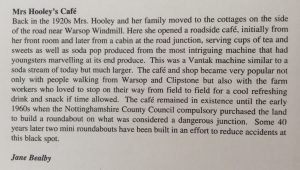 The Hooley family had links to the area before this time. John Hooley was born in 1853 at Warsop and died in 1941. He was the son of William Hooley and Ann Wilkinson. In 1861 they lived at  Low Street. with their children Ann, age 13, occupation: employed at home, Samuel age 11, occupation: Agricultural Labourer, John Hooley age 8, and Ellen Hooley age 4 and boarder: William Wilkinson age 6 months

In 1911 William was a secretary of Warsop Main Colliery Cricket Club. They had a good team and finances were favourable.

Another family member was Slogger Hooley of Warsop who fought a six round boxing match against Slasher Manley of Langwith. 1939 There are many records of his boxing events in the newspaper around this time.

Memories of visits to the windmill cafe by Michael Hallam:

In the last year at King Edwin School, our class was taken to the Forestry Commission woodland near Warsop Windmill crossroads. We were picked up from school on Fourth Avenue and helped into the back of two Bedford army lorries on a Saturday morning. We were then taken to where the Russian Log Hut stood. We planted pine trees, for about four hours, then we were taken to Mrs Holland’s café near the Warsop Windmill. We all had a bottle of orange pop, paid for by Mr Eales and Mr Jackson, our school teachers, Mr Jackson came on his push bike from Worksop Class mates were: The Robinson Twins, Stuart Easom, John Hodgkinson, David Haigh, John Farrel, John Tonks, Brian Hawkins, John Penistone, Michael Maxfield, John Benson, Terry Wardell, Duffrig Jones, Michael Godwin and Stuart Clarke. Michael has sent two photographs above of the Windmill and the café at the crossroads.

One resident William Capes, from Warsop Windmill, signalman was a Labour candidate in the local elections. Friday 26 March 1937

Warsop (Forest) Windmill 2006 Before the recent restoration. It was last sold in April 2018. 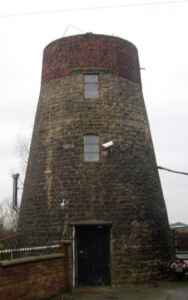