The Italian POW lived in huts at the other end of the cricket pitch (opposite the Craft Centre) The land used to be covered with elderberries, brambles and tree stumps but it was cleared and levelled so they could make a football pitch with goal posts.

This Mosaic was designed by the Italian prisoners of war and was at the entrance to
army/displaced people’s camp in forest. 1946-8. There are no traces of it now but was positioned as on the map. 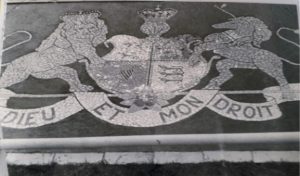 The UK Coat of Arms 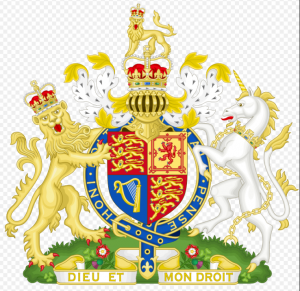 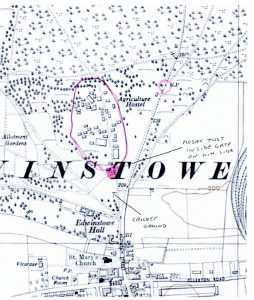 Within the forest and right up to the Major oak there were many ammunition storage huts as shown in the photograph below. Along the paths the footings of the nuts can still be seen. 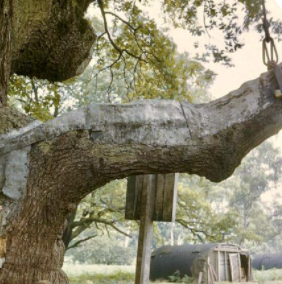 After the war the Italians returned home and displaced people (migrants) from all over Europe came to the camp. There were Poles, Czechoslovaks, Latvians and Russians. Most of them worked down the pit with the local men. Others worked on farms growing food to help feed us. They knew they could not go home as they would be called collaborators (people who worked with the enemy) as they had been freed in Germany. They were known by many as very good workmen. 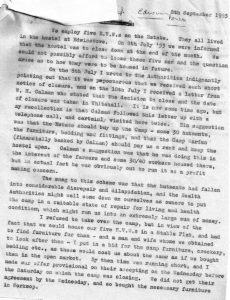 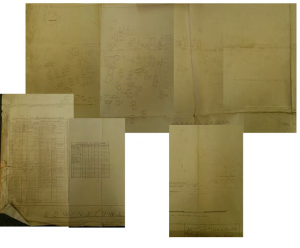 We are aware that the picture is unclear.

THIS IS A COPY OF A PHOTOGRAPHED LETTER SHOWN TO THE EDWINSTOWE HISTORICAL SOCIETY BY MEMBERS OF THE THORESBY ARCHIVE OFFICE ON A VISIT TO THORESBY ON MONDAY, 11TH FEBRUARY, 2019.

We employ five E.V.W.s on the Estate.  They all lived in the hostel at Edwinstowe.  On 8th July ’53 we were informed that the hostel was to close down at the end of the month. We could not possibly afford to loose these five men and the question arose as to how they were to be housed in future.

On the 8th July I wrote to the Authorities indignantly pointing out that it was preposterous that we received such short notice of closure, and on the 10th July, I received a letter from W. H. Calman who stated that the decision to close and the date of closure was taken in Whitehall.  It is now some time ago, but my recollection is that Calman followed this letter up with a telephone call, and certainly visited here twice.  His suggestion was that the Estate should buy  up the Camp – some 30 hutments, the furniture, bedding and fittings, and that the Camp Warden (financially backed by Calman) should pay us a rent and keep the hostel open.  Calman’s suggestion was that he was doing this in the interest of the farmers and some 30/40 workers housed there, but in actual fact he was obviously out to run it as a profit-making concern.

The snag to this scheme was that the hutments had fallen into considerable disrepair and dilapidation, and the Health Authorities might well come down on ourselves as owners to put the camp in a suitable state of repair for living and health conditions, which might run us into an extremely large sum of money.

I refused to take over the camp, but in view of the fact that we could house our five E.V.W.s in a Stable Flat, and had to find furniture for them – and a man and wife whome we obtained to look after them – I put in a bid for the camp furniture, bedding etc., as these would cost us about the same as if we brought them in the open market.  By then time was running short, and I made our offer provisional on their accepting on the Wednesday before the Saturday on which the camp was closing.  We did not get their agreement by the Wednesday, and so bought the necessary furniture in Worksop.

During his conversations Calman stated that he had been working with the Authorities responsible for the camp, and offered to speak to persons in charge of the camp and its equipment, in Nottingham.   This he did, and one of them (Mr. Spendlove) came over here and discussed matters with me. When the deal for buying the furniture etc. fell through, an end was put to Calman’s project of profit making there.  He then turned nasty and sent a bill for £4.4.0 “for interviewing Authorities in Nottingham as per my instructions”.  As I said before, there was no question of our engaging him professionally, and in actual fact he was really working in, what he hoped to be, his own interests.

I relied to Calman that I had not engaged him professionally and he then wrote to you.  I suggest that you reply to him as follows.