The best-known visiting preacher was Reverend James Flanagan (1851-1918). As a Town Missionary and advocate of home missions, he had made many converts amongst the desperately poor inhabitants of Nottingham’s notorious Narrow Marsh and other slums. By 1887 the Albert Hall in Nottingham was filled on Sunday nights with people eager to hear him. ‘Ministers slipped into churches to hear him preach, and many of them proclaimed him chief for they were held spellbound by his eloquence.’

His father was a Irish pipe-maker with a weakness for drink. He died young leaving James’ mother to raise at least six children. Working as a coal miner, James had taken to ‘evil ways’. However, when he was 21 years old he attended a service at the Primitive Methodist Chapel in Ilkeston and was converted. He immediately set about learning to read and write, studying late into the night. Desperate to hear Charles Spurgeon’s inspirational preaching, having worked a 14-hour shift, James set off on foot. The hall was already full, but when he told a steward that he had to walk 18 miles and start work at 4 am, he took pity and smuggled him into a remote corner.

Joining a mission band, he learned how to give his testimony becoming a lay preacher and conducting short missions.  James Flanagan’s ‘name rapidly became familiar in the homes of the people and invariably the simple, well-known portrait-poster to which was added, ‘Flanagan is coming’ was sufficient advertisement to secure a crowded chapel or well-filled hall.’

His mother, Elizabeth Robinson, was born in Edwinstowe in 1821, the youngest of five children. In 1827, within a few days they had lost both their parents, Richard and Isabella, to typhoid. The family had worked at Thoresby Hall for Earl Manvers for 40 years. Elizabeth had happy memories of Edwinstowe and spoke ‘with pardonable pride of the manner her father’s character had impressed the big folk at the Hall…..The day of the funeral, the solemn procession, the crowded village street….’

Flanagan came to Edwinstowe on a fortnight’s mission. On arrival, although his hosts Mr. and Mrs. Freeman said, “the tea is ready, come and take a meal. You can visit the church afterward.” He answered, “Thank you; no, that churchyard is a sacred spot to me, I must go there first”.  He continues, ‘Leaving the house I wended my way to the upper end of the village to the old church, which for the size of the place, was a fine structure. The church and churchyard being elevated above the rest of the roadway, I passed through the swing-gate and ascended the few stone steps which opened on the pathway leading to the church door.’  Asking the old Sexton to follow him, he made his way to the left side of the church, ‘coming on a quiet corner near the hedge which divided the churchyard from the vicarage garden. There, in a shady spot were two graves.’ He immediately knelt down beside his grandparents’ joint grave and prayed that ‘as he had heard my former petition to open the way that I may preach The Gospel where my mother was born, he would so qualify me for the work that the mission should not be forgotten.’ It certainly proved unforgettable!  ‘The little chapel became too small to hold the people who wished to be converted. The Wesleyan friends threw open their doors,….even in the public-houses, the one theme was salvation.’ (Primitive Methodist Magazine 1901). 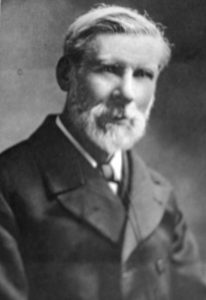 He was sent on missions to New Zealand, Australia and South Africa. He is commemorated at St George’s Hall, Nottingham. When it opened in 1900 he had raised £12,500 for the building fund. (see Nottinghamshire Historian Spring/Summer 2004 pp 9-11 Peter Hammond Reverend James Flanagan)

He was the author of several books. (See “The Life of James Flanagan,” by R. W. Russell, London: Holborn Publishing House).