In 1962 Keith Gascoigne began his career as a bowyer, as apprentice to the late Les Howis at Marksman Archery, learning his craft and for many years running the workshop. 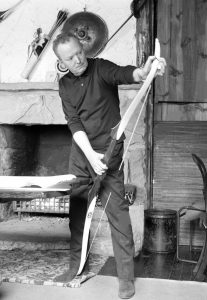 Keith designed the KG1 while at Marksman and the bow was named after him, for many years it was one of the top bows and many people are still shooting it today. 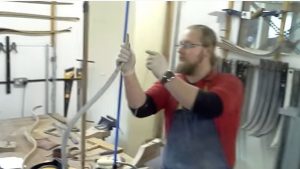 In 1991 Keith opened up his own business KG Archery, the first bow Keith produced was the KG Nemesis named after the goddess of divine retribution, very soon to follow was the Paragon the world’s first all carbon bow handle this bow has won many awards starting with the 1993 UK Rural Development Innovation award for the use of Carbon in a bow handle.
The Paragon Carbon handle with KG Carbon Limbs this combination went on to win both Silver and Gold medals in the Para-Olympic games in Atlanta 1996 Sydney 2000 and in Athens 2004 Gold again. In the beginning K.G Archery was originally set up as a bow making workshop, but soon opened a small sales room for customers to buy accessories to go with the bows. 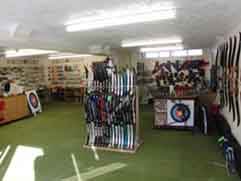 Now the showroom is not so small, and we have a substantial range of bows and equipment from an assortment of manufactures. In August 2009 in order to have more production space KG Archery moved to larger premises in Walesby only a few miles from its original shop. The new workshop has allowed KG to expand their production capabilities and customers visiting the shop can see bows being made, everything from the new Nex-Gen Limbs to the exotic field bows that team KG make. The new showroom is fully stocked with everything for the beginner or Novice archer to the more experienced archer if you shoot the Recurve, longbow or compound we can help you. We have an indoor shooting range where you can try bows out. All bows purchased from KG Archery are set up by professional bowyers.
Do you need expert coaching? This is also available by appointment with Christine who has coached three ladies to the Olympics in 2004 two of which came back with Para Olympic gold medals in the team event. Christine has a wealth of coaching knowledge and experience ranging from beginner levels all the way up to National Squads. Because of this, together with the other two County Coaches on the staff, we can offer comprehensive coaching, bow tuning and general shooting advice to everyone. My team to help you are Christine, Tammie and my Bowyers Adrian, Neill, Martin and Jamie.