In July, 2021 Michael Brightman contacted the Society to share his family connections with
Edwinstowe and surrounding villages. Michael was born at Holbeck on the Welbeck Estate
and emigrated to Australia in 1972.
When the Society began a search of the local newspapers for any references to the
Brightman family, the Nottingham Journal dated 30th September 1943 referred to a
thatching demonstration by Mr J Brightman (Welbeck), at Clifton Pastures, near
Nottingham. This was forwarded to Michael who named the gentleman as his grandfather.
He was well known for his “thatching” but Michael had no idea he had actually
demonstrated his skill. Michael then provided a photo of his grandfather which must have
been taken at the time of the report. 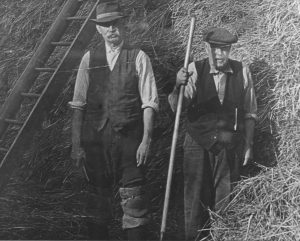 Grandfather, Josiah, on left.
On the 22nd August, 1905, the Retford & Worksop Herald & North Notts Advertiser reported
that at the Welbeck Show, Charles Brightman tied in second place for the size of a beast.
This gentleman was Charles Frederick Brightman Josiah’s brother.

Michael’s grandparents (Josiah Brightman and Ann Elizabeth, nee Lowe) were married in St
Mary’s Church, Edwinstowe, in 1898. Ann came from Old Clipstone and Josiah came from
Lincolnshire, and they lived and worked on the Welbeck Estate, for the rest of their lives.
Their youngest child, John Thomas, was Michael’s father. It is through the Lowe family that
Michael had connection with Edwinstowe and nearby villages.

Ann’s parents were George Lowe and his second wife, Phoebe Fallowell. In the late 1700’s
William Fallowell moved to Carburton. He married Elizabeth Rollinson of Carburton at
Edwinstowe in 1788. They had 5 sons (John, William, George [Michael’s 3 x great
grandfather], Benjamin and Thomas) and 4 daughters (Elizabeth and Louisa – twins), Mary
and Ann.

Michael’s 3 x great uncle (John Fallowell) served in the Napoleonic Wars, was severely
wounded and invalided out of the army. A copy of his discharge paper, 1810, is copied
below. He was made a Chelsea Out-pensioner and in 1819 he married an Edwinstowe girl
(Ann Wordsworth) at Edwinstowe. (Ann’s parents were George and Hannah, nee Mitchell)
who were married at Edwinstowe in 1786. John and Ann lived in Edwinstowe for the
remainder of their married lives. The 1841 and 1851 censuses showed John and brother
George living in their separate households in the hamlet of Hazel Grove, Edwinstowe. 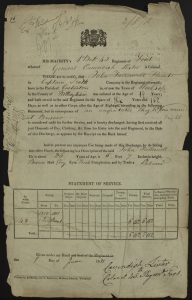 Michael was anxious to learn of the gravestones/burial sites in St Mary’s church yard, in
respect of his great grandmother Pheobe (Fallowell) Lowe and his 3 x great grandparents
George and Marina (Mosely) Lowe who lived at Clipstone and were buried at Edwinstowe,
also 2 x great grandparents Charles and Mary (Chapman) Lowe.
A copy of the records and inscriptions from the graves in St Mary’s church yard written
down between 1986-87 were sent to Michael. They included references to the Lowe/Low,
Wordsworth, Mitchell and Rollinson families.
More memories of the Lowe family may be found elsewhere on the website.  https://edwinstowehistory.org.uk/local-history/people/families/lowe-family/

(NB Some Church Wardens who wrote the records were not well educated and spelling of names varied greatly, which was the case when Michael was tracing the Fallowell family records)