On Wed. 16th February, members of the Edwinstowe Historical Society met for their first meeting since the advent of Covid. The illustrated talk focussed on Edwinstowe, Tourism and Sherwood Forest. 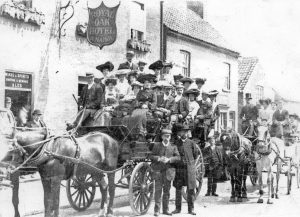 Sherwood Forest and the Major Oak’s attraction for visitors to the Edwinstowe area began in the 19th century, bringing artists, writers, and poets   who all found inspiration in the leafy glades. The newly opened railway station in 1896 brought in the tourists, who were met at the station and had the opportunity to be driven through the forest in horse drawn coaches.   Of course, hungry and thirsty travellers could find sustenance at the Dukeries Hotel (built especially for “The Dukeries Line” coming to Edwinstowe), and other inns and boarding houses in the village.  As the 20th century developed visitors continued to arrive, not necessarily by train but in coaches or their own transport.  In 1976 a Visitors’ Centre opened in the forest, but after many years the decision was taken to demolish the centre and erect a new one that opened in 2018 on a site near the cricket ground.  In 1984 the first Annual Robin Hood festival took place.