At a well-attended meeting in November Edwinstowe Historical Society members and visitors enjoyed an illustrated talk by Kevin Murphy about the Prisoner of War Camp system and the part played by Edwinstowe’s camp. Prisoners of War were detained in camps which reflected their risk to the nation.  Some of the local camps were at Welbeck Abbey, Rufford Abbey, Boughton, Carburton, Norton Cuckney, and Edwinstowe where the camp was sited to the north of the village cricket ground on the edge of the forest.  Prisoners were German, Italian and Ukrainian, based either in the camps or sometimes billeted out.  Edwinstowe‘s camp held Italians. Uniforms had a yellow dot on the back of the jackets and on one of the trouser legs.   Work was mainly agricultural. Two members shared their memories of seeing the POW’s when they were allowed outside the camps.

After hostilities ended some prisoners applied to remain in England and for their families to join them.  In Edwinstowe the camp was used to accommodate Displaced Persons from eastern European countries, most of whom worked down the pit, and others on farms. 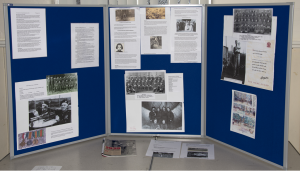