“A Committee of Fun” and a “Gathering of the Foresters”

In November 1841 Edwinstowe witnessed a “Gathering of the Foresters”.  However, this wasn’t a military operation but a bringing together of a group of people who were interested in literature, science, and art. 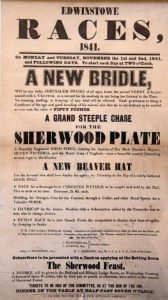 When the members of the Edwinstowe Lodge of Oddfellows met in the Jug and Glass they set up a ‘Committee of Fun’ to make plans for village festivities to be held from the 1st to 6th November 1841. During the week there would be various races, competitions and concerts, and the evening of 3rd November would be devoted to an intellectual gathering in honour of the celebrities who had added to the renown of Sherwood Forest. This became known as the ‘Gathering of the Foresters’.  One hundred farmers, artisans, woodmen and agricultural labourers were present.  The poet, Spencer T Hall, known as the laureate of Sherwood Forest, was the chief guest and was presented with an oak walking stick carved by local resident Richard Tudsbury, junior.

The event was so successful that on 5th July, 1842 several hundred people attended the second Sherwood Gathering which took place in a marquee in the forest.   In the evening the whole party danced to the accompaniment of a band of music beneath the Major Oak.  Edwinstowe was proud of its literary heritage and people walked from miles around to join the festivity.   Unfortunately, the custom could not continue because all the organisers were working men dependent upon their labour, and did not have the time to fulfil their obligation.

Recent additions to the website include the Edwinstowe Labour Party, Methodist Drama Group, and Windmills.