The thought of winter sends shivers down the spine for many people.  This must have been the feeling in Edwinstowe in March 1909 when there was a snowstorm.  To commemorate the event a member of the Tudsbury family, who lived in the village, modelled several snow sculptures, which were recorded on picture postcards.

During the 19th century the family became involved in working with wood and produced an outstanding woodcarver, Richard, who exhibited at the Great Exhibition in London in 1851. Richard John Tudsbury is reported to be the carver of the magnificent chimneypiece, which can be seen in the library at Thoresby Hall.  His youngest son, Walter Albert, became a well-known local artist painting mainly woodland scenes and also carved the oak lectern, which may be seen in St Mary’s church Edwinstowe.

Additions to the website relate to the National Coal Board’s No. 3 Area headquarters for the East Midlands Division, based in Edwinstowe House.  The building was occupied from the onset of Nationalisation of the Coal Industry in 1947 until January 1995. 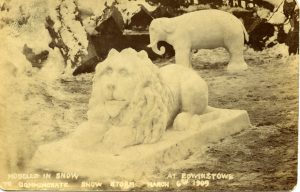