At a well-attended meeting of the Edwinstowe Historical Society in April, members heard about one of the lost properties in Nottinghamshire, namely Cockglode House, Edwinstowe, built in 1724, or thereabouts, and demolished in 1956. 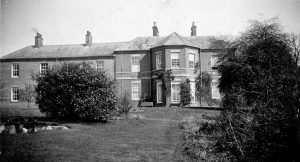 Throughout its lifetime it has been home to several notable people, the first being the Rev William Sterne, Rector at Averham, whose ancestry included Richard Sterne, Archbishop of York, and Laurence Sterne, novelist and clergyman.  The next tenant was Dr George Aldridge who built the elegant Georgian residence. His portrait, painted by Italian artist, Pompeo Batoni, was the subject of the BBC4 televised programme in 2019 “Britain’s Lost Masterpieces”.   He was followed by Sir Robert Milnes, Bart. who had been Governor of Martinique;  the next tenants were Colonel, the Hon Savile Henry Lumley;  Cecil George Foljambe,  Earl Liverpool; and lastly Mrs Eva Henrietta Hutton and  her daughter Lady Eveline Maude, the latter involved with the inauguration of the Edwinstowe Women’s Institute in 1920, and the National Federation of Women’s Institutes.  After 1940 Cockglode became difficult to let as a large house so it was converted into eight flats.

The nearby Thoresby Colliery which had been opened in 1928, expanded to mine deeper coal seams.  This meant that more land was required for waste spoil so the National Coal Board bought Cockglode house and its immediate grounds, and in 1956 the once proud building was demolished and disappeared under the colliery spoil tip.

However, to mark the millennium, local Rotarians planted trees to cover the restored colliery tip and the area has been named “Cockglode Wood”.