On Wed. 18th September a well-attended meeting welcomed guest speaker Chris Booth when he presented an illustrated talk about the Lancashire, Derbyshire and East Coast Railway.  The talk was well documented and illustrated with photographs of the development and history of the route from its inception to 2017.

William Arkwright’s intention had been to provide a rail link for the movement of coal between Warrington on the Manchester Ship Canal and Sutton on Sea on the east coast of Lincolnshire.  However, the only part of the line to be completed was between Chesterfield and Lincoln, and a branch line to Sheffield, which opened in 1897.  Taken over by the Great Central Railway in 1907 this became known as the Dukeries Route.   A passenger service lasted in parts until 1955.   With the closure of High Marnham power station in 2003 and the demise of the coal industry (Thoresby Colliery being the last Nottinghamshire pit to close in 2015) use of the line declined.    A small section of the line continues to have a future as a Network Rail Test Track. 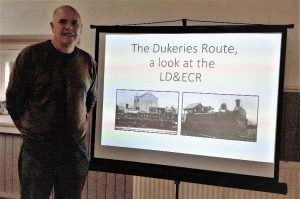 On 16th October Andy Gaunt will speak about “Sherwood Forest Outlaws and Villains,” and on 20th November Chris Wier will unveil “The Mysteries of Nottinghamshire”.