On Wed 20th February a well-attended gathering welcomed Bob Massey who presented an illustrated talk entitled “The Forest – Highway Robbery on a lonely stretch of road through Sherwood Forest”. Sherwood Forest once covered an area of approx. 100,000 acres between Nottingham and Worksop, and the road (now the A60) was part of an ancient route connecting London to York.

The route would have been no more than a footpath, and travellers would have had to be in a group to undertake a journey. The Hutt Inn, opposite Newstead Abbey gates, occupies the site of a 12th century garrison for men-at-arms who guarded the highway. Numerous notorious gangs of outlaws roamed the forest in Medieval times, but Nottingham’s most notorious highwayman and woman in the 17th century were Joan Phillips and Edwin Bracey. Joan was hanged in Nottingham in 1685 and Bracey died after being shot.  Often highwaymen ran inns which presented them with an opportunity to assess a traveller’s wealth so appropriate action could be taken when the traveller resumed his journey!  People arrested were hanged at Gallows Hill, Nottingham where the last execution took place in 1827.  From 1831 condemned prisoners were hanged in front of the Shire Hall in Nottingham.

With the introduction of the turnpike road between Nottingham and Mansfield in the 18th century traffic could move faster which helped to make travelling safer.

At the request of the RSPB the Society provided photos from the archive for the hoardings displayed in the forest close to the site of the old Visitor Centre. 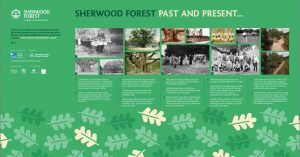 The next meeting will take place on Wed. 20th March, when Jo Golby will present an illustrated talk about the “A Victorian Lady’s Maid”.